Stevenson, a 2016 Olympic silver medalist, continued the solid start to his professional career by stopping Oscar Mendoza in the second round of a completely one-sided featherweight fight in The Theater at Madison Square Garden. The 20-year-old Stevenson (4-0, 2 KOs) consistently landed to an overmatched Mendoza’s body and picked him apart until referee Sparkle Lee stopped the beating at 1:38 of the second round. 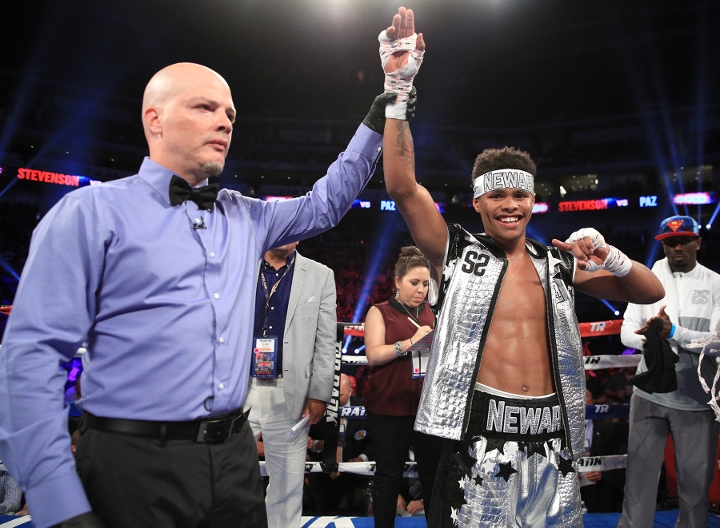 “Keep watching me,” Stevenson told ESPN’s Bernardo Osuna in the ring following his win. “They’re gonna keep disrespecting me and I’m gonna keep picking it up.”

The southpaw from Newark, New Jersey, became the first of Mendoza’s seven professional opponents to beat him by knockout or technical knockout. The 26-year-old Mendoza, of Santa Maria, California, slipped to 4-3.

“Everything was working tonight,” Stevenson said. “Everything I threw landed. This week there’s been a lot said about me holding. I’m not a fighter who holds. I’m a fighter.

“Working with Vasyl Lomachenko [in training camp] really helped me a lot. He’s one of the best fighters out there and I learned a lot working with him.”

Stevenson went after Mendoza as soon as the second round started, seemingly intent to not allow their fight to reach the third round.

“I hit her hard,” Mayer said. “She fought back. I thought I did a lot of things well in the fight. I’m ready to move on to six-rounders now.”

The Bronx’s Feliciano, 29, has lost five of her past seven fights. She still hasn’t been knocked out during a pro career that began May 2009.

Flawless Victory! Shakur is going to be a beast [B]once his body matures[/B]! He throws with bad intentions, great distance and balance! He's the whole package! Someone please put Devin Haney on TV!

[QUOTE=Corelone;18319177]I was going to make a critical comment, but I'm watching Conlan, and he's worse.[/QUOTE] Haha I was thinking the samething, but I'll support both

I was going to make a critical comment, but I'm watching Conlan, and he's worse.

No need to be ridiculously over protective for this kid, he can fight. He needs decent opponents to progress into the rounds so he can learn the pace of a fight. He's ready for 6 & 8 round calibers now!…