RENO, Nevada – Shakur Stevenson views Joet Gonzalez as a serious threat to prevent him from making his championship dream a reality.

The 22-year-old featherweight contender isn’t so sure the feeling is mutual. Stevenson is convinced Gonzalez is underestimating him as they move toward their 12-round, 126-pound title fight Saturday night at Reno-Sparks Convention Center.

“He’s looking at me in a way that nobody else is looking at me,” Stevenson told BoxingScene.com. “I don’t know if it’s him trying to psyche himself up or something. I’m not sleeping on him, but he’s definitely sleeping on me. If you ever heard me talk about Joet, even two or three months before this fight was even made, I was Tweeting, saying that Joet is a good fighter.

“And I still believe that Joet is a good fighter. If you hear him talk about me – I seen an interview where he said, ‘Shakur Stevenson is overrated. I don’t think he’s that good, and I believe I will stop him if we fight.’ Now we fighting. It’s here Saturday.” 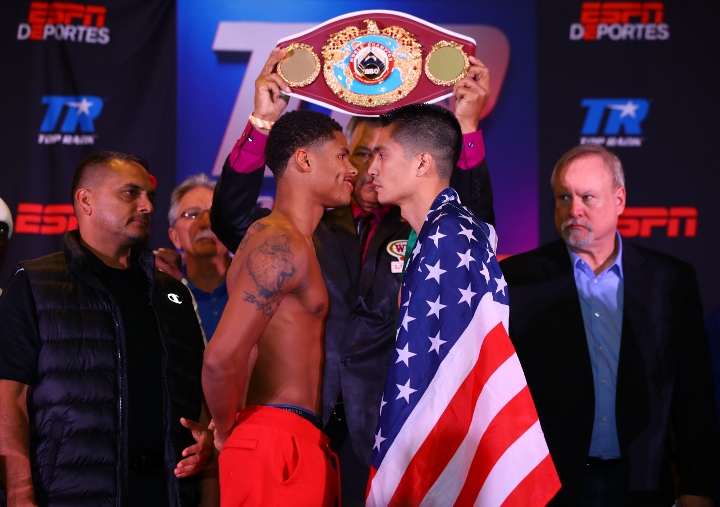 Stevenson believes the 26-year-old Gonzalez gained confidence from the three rounds they sparred against one another three days before Stevenson made his pro debut in April 2017. The 2016 Olympic silver medalist said he received a cortisone shot in his left hand the day before they sparred and hadn’t previously sparred throughout camp prior to his first professional fight.

“I guess after the sparring, he’s going on tapes and saying that he beat me up and all this extra stuff,” Stevenson said. “I’ve got the video of the sparring. I didn’t see where he thought he beat me up. But his tone been changing lately. One minute he’s saying he beat me up. Then, the next minute he say we was going 50 percent in the sparring and nobody was really doing nothing. He ain’t really making sense. But I guess he’s judging off of that.”

However they may remember what transpired that day in Gonzalez’s gym, Stevenson senses Gonzalez will be surprised Saturday night once he realizes how much Stevenson has improved over the past 2½ years.

“I think he’s definitely sleeping on me,” Stevenson said. “In his head, I am just a kid. I’m the same little kid that came out of the Olympics, basically. But he don’t understand that a lot has changed since then. And he’s basing it off of when we sparred three days before my pro debut. I guess he’s basing what he thinks off of the kid Shakur, not off of the Shakur that I am right now. I guess he’s gonna have a rude awakening on Saturday.”

ESPN+ will stream Stevenson-Gonzalez as the main event of an 11-bout card Saturday. The main event is projected to start at approximately 11 p.m. EDT/8 p.m. PDT.

Stevenson (12-0, 7 KOs), who’s ranked No. 1 by the WBO, and the second-ranked Gonzalez (23-0, 14 KOs), of Glendora, California, will fight for the unclaimed WBO featherweight title Oscar Valdez vacated nearly three months ago.

[QUOTE=ThatDude44;20145902]Didn't Shakur represent that flag in the Olympics?[/QUOTE] Dont pay these ignorant hateful fools any mind.

[QUOTE=Shadoww702;20145823]I bet Shakur wants to BURN that American Flag while Gonzalez wears it PROUDLY!!! I always say anyone that burns flags replace them with ppl who WANT to be here...[/QUOTE] Didn't Shakur represent that flag in the Olympics?

He should've said 'Joet Gonzalez is sleeping on me, but i'm sleeping with his sister'

I bet Shakur wants to BURN that American Flag while Gonzalez wears it PROUDLY!!! I always say anyone that burns flags replace them with ppl who WANT to be here...

This will be a good fight. Great test for each fighter at this stage in their careers. They have some history being from same era of amateur fighting and sparring when Stevenson turned pro . Plus the drama element makes…