Shakur Stevenson Demolishes Viorel Simion in One Round

Stevenson knocked down veteran Viorel Simion three times in the first round and produced an impressive knockout just as the first round ended at CHI Health Center. The 21-year-old Stevenson (9-0, 5 KOs), a 2016 Olympic silver medalist from Newark, New Jersey, became the first of Simion’s 24 professional opponents to knock him out.

Romania’s Simion (21-3, 9 KOs) hadn’t been knocked down in a bout before the undefeated featherweight prospect floored him, either. He previously lost only a pair of 12-round unanimous decisions to Scott Quigg, a former WBA super bantamweight champ, and ex-IBF featherweight champ Lee Selby. 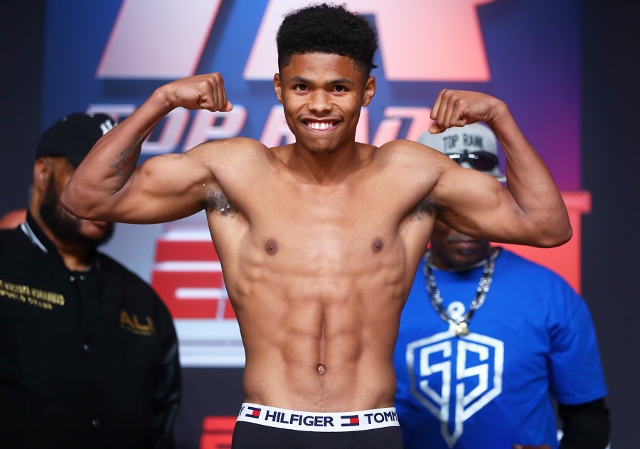 Each of the three knockdowns Stevenson scored were caused by right hooks. By the time Simion got up from that third knockdown, referee Curtis Thrasher had seen enough and halted the action after the bell rang to end the first round.

“My grandad told me the right hook would be there because he holds his left hand low,” said Stevenson, who called out Selby following his three-knockdown win. “And I capitalized on it.”

Stevenson was supposed to box Wisconsin’s Duarn Vue on Saturday night, but Vue (14-1-2, 4 KOs) withdrew due to an injury. Simion, 36, took this fight on short notice, despite that prior to Saturday night he hadn’t fought since dropping a 12-round unanimous decision to Quigg in April 2017 at Wembley Stadium in London.

“He honestly motivates me to get stronger,” Stevenson said after defeating Simion. “Because every time he talks to me, he says I ain’t got no power. So I’m gonna keep showing him more and more, just as I wanna show myself, that I’ve got power.”

Shakur has the skills, work ethic and desire to be great. The juryis still out on him obviously, but if the power he displayed last night was for real, then he can go far. I’m rooting for him

Time to give him an opponent with a pulse. No more bums

Good win but that refs count was pretty quick. Could definitely have let the guy out of the round.

I gotta say...i have loved watching Shakurs come up in the pros. Had opportunity to watch every fight since pro debut and its been pretty fun having that opportunity. Alot of boxing watching opportunity these days with all apps and…