Shakur Stevenson Will Aim To Impress in Homecoming Headliner

After fighting near his hometown or abroad, Shakur Stevenson will finally fight in the city where he was born and raised. 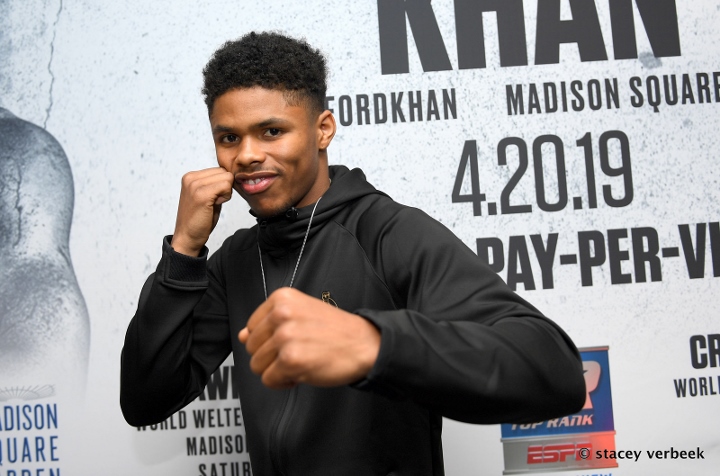 The 10-round bout will take place at the Prudential Center in Stevenson’s hometown of Newark, New Jersey. Preceding the fight will be a 10-round bantamweight bout between bantamweight contenders Joshua Greer and Nikolai Potapov.

Both fights will air live on ESPN and ESPN Deportes.

The fight will mark the first time Stevenson will fight in his hometown as a pro. The 21-year-old Stevenson has fought across the Hudson River at New York City’s Madison Square Garden, along with Atlantic City, and Omaha, Nebraska, but never in Newark.

According to Moretti, Top Rank’s plan to have Stevenson, a 2016 Olympic Silver medalist, fight in Newark could be traced back to before his pro debut.

“We wanted Shakur to be the headliner in Newark, not as an undercard fighter,” Moretti told Boxingscene. “The city of Newark has been behind this 100 percent.”

Stevenson, who is co-managed by Andre Ward, James Prince, and Josh Dubin, is already ranked No. 5 by the WBC and the IBF. The WBO has Stevenson No. 6 in its rankings.

Socarras (22-0-3, 14 KOs) was born in Cuba and now resides in the Miami area. In his last bout on May 10, the 26-year-old Socarras stopped former bantamweight contender Jesus Martinez of Colombia in the fifth round.

Socarras is ranked No. 7 by the WBA.

Potapov (20-1-1, 11 KOs) is originally from Russia and now resides in Brooklyn, New York. The 29-year-old Potapov has won his last three bouts since suffering his only loss as a pro at the hands of Omar Narvaez in October of 2017. He is ranked No. 4 by the WBO.

[QUOTE=Speedy1;19831239]Where did you see that the fight was off? I can’t find anything in my search via the Google Not doubting you, just wanted to read more about it. If you could post a link that would be great, thanks![/QUOTE]…

[QUOTE=garfios;19830662]Fight off. shakur didn't do vada. I think he is off the rankings too.[/QUOTE] Where did you see that the fight was off? I can’t find anything in my search via the Google Not doubting you, just wanted to read…

[QUOTE=CubanGuyNYC;19830674]Lovely. Thanks for the (bad) news.[/QUOTE]A least two alphabets soups, took him out of their rankings. The guy refuses to be tested. Smart move by Hairon, he is getting tested.

[QUOTE=CubanGuyNYC;19814687]I remember when Hairon first came up. He seemed promising, but the promise he showed early has begun to look limited. Stevenson is a rising star. His handlers took a chance in his last fight, putting the kid against such…