Shakan Pitters, Isaac Chamberlain Back on August 22, on Channel 5

Hennessy Sports has announced that their next event will air live and on free-to-air television on Saturday 22nd August when fierce rivals Shakan Pitters and Chad Sugden collide for the Vacant British Light Heavyweight title on Channel 5.

The event will be staged in a state of the art, arena sized and purpose built production studio, behind-closed-doors, with no public in attendance.  In addition, strict medical protocols laid out by the BBBofC will be followed to ensure the health and safety of the boxers, trainers, staff, officials, medics and broadcast team working on the night. 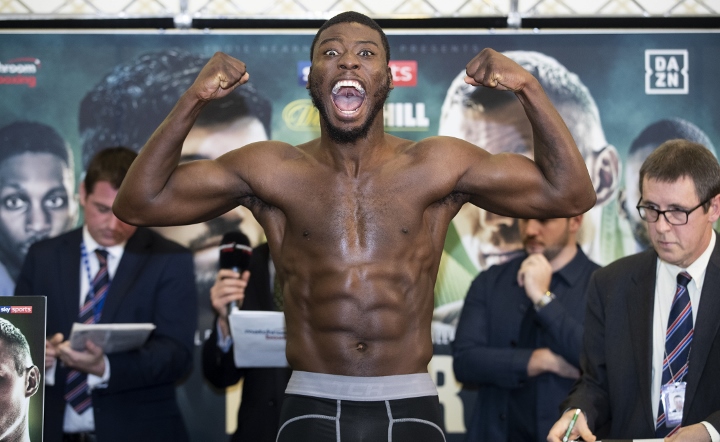 Whilst it will be an unusual experience to not have the energy and atmosphere of fans’ at the event, the Channel 5 production team will use innovative ideas and techniques to fully enhance the presentation for the viewer.

Pitters and Sugden collide in a mouthwatering dust up that was originally scheduled for March 28 in Coventry, but had to be postponed one week prior to the event when the country went into lockdown caused by the COVID-19 pandemic.

After three months of self-training in isolation at their homes and only recently beginning to train and spar in controlled conditions in their gyms after the British Boxing Board of Control eased restrictions, Pitters and Sugden are now powering on in their respective training camps to prepare for boxing’s big return on terrestrial TV.

Undefeated Pitters from Birmingham said, “This has been a long time coming and every day that’s gone by in lockdown I’ve been getting more and more hungry, determined and focused on beating Sugden and claiming the British title,”

“It was very frustrating when the show was cancelled just one week before, but I understood the bigger picture as the pandemic is a global crisis and the lives that had been lost in the UK alone was frightening and I commend the front line workers who kept working throughout,"

“I just had to be patient and keep training in the background and thanks to Mick and Channel 5 the big fight is now back on,"

“Whilst my loyal supporters can’t be there, the fight is live and free for everyone to watch on Channel 5, so tune in and watch me beat Sugden and become the new British champion.”

Newark battler Sugden said, “This was the news I had been waiting for for a long time and I just can’t wait now until August 22nd and to get in the ring and win that beautiful British title.”

“I’ve certainly missed my live sport on TV but now things are returning gradually with football and boxing and I’m thrilled that my fight will be broadcast live on Channel 5 and it’s free for anyone to watch,”

“This is going to be a great fight, I’m certainly not seeing this as an easy one.  Pitters wants it bad and so do I.  It’s down to who wants it more and who’s prepared to go that extra mile,"

“I’m gutted that my loyal fans won’t be there to see me lift the British title, but get the drinks and snacks in and switch on to Channel 5 and watch from the comfort of your own home.”

Promoter Mick Hennessy said, “It’s been extremely tough for everyone throughout the country these past few months, but key and frontline workers have kept us safe and going through these hard times and with the vast majority of the public adhering to the lockdown rules we’re now starting to come through, but there’s still a long way to go and we must be vigilant,”

“With live sport on TV starting to return after months off-air, I’m delighted to finally bring boxing back with a bang on free-to-air TV screens on Channel 5 and what a fight to return with between Shakan and Chad and the prestigious British title on the line,”

“I believe that it’s vital that sport and boxing reaches the biggest viewing audience possible and I’m delighted that with our broadcast partner Channel 5 we can deliver this fight live on terrestrial TV in the UK to an audience of millions and more importantly it’s absolutely free to watch.”

“It’s been very tough on Shakan and Chad who were ready to go a week before the first fight and then it had to be postponed following the lockdown.  Since then they’ve had to maintain their discipline through training at home and keep positive despite the uncertainty of when the fight would be rescheduled, but through patience and perseverance it’s now on,”

“We have worked step-by-step with the BBBofC and followed the Government guidelines to ensure the safety of everyone involved with the event, but sadly, though, we are unable to allow fans into the venue at this present time,”

“Whilst it will be a strange experience not feeling the raw energy and passion of the crowd as Shakan and Chad engage in what I believe will be a thrilling fight, through technology and innovative production ideas from the team at Channel 5 we will deliver a special first class presentation that will go a long way to fill the void of fans not in the venue.”

This will be the first live championship boxing event of a busy schedule for Hennessy Sport on Channel 5 with more big title-fight shows to be announced in the coming weeks.