Serrano: I Want To Be The First Boricua To Be Undisputed Champion

With each win, she’ll also never stop making history on behalf of her beloved island as well.

The record-setting seven division titlist—who now lives and trains in Brooklyn, New York—is anxiously awaiting clearance for her long-awaited superfight with Katie Taylor (15-0, 6KOs), the two-division and reigning undisputed lightweight champion from Bray, Ireland. Their bout was due to take place May 2 in Manchester, England but was postponed in the wake of the ongoing coronavirus disease (COVID-19) pandemic.

A tentative reschedule date of July 4 is in place, also in Manchester and with the possibility of the fight taking place without fans in attendance should the date hold up. Whenever it takes place, it will mark her attempt at a second lightweight title run and 10th overall title reign in seven weight divisions ranging from 115- to 140-pounds.

“Well it’s an honor as a woman making history and as a Boricua as well,” Serrano (38-1-1, 28KOs) stated in a recent interview with Jessie Vargas as part of Matchroom Boxing’s Peleamundo series. “It’s a huge honor because Puerto Rico has someone representing the entire island.” 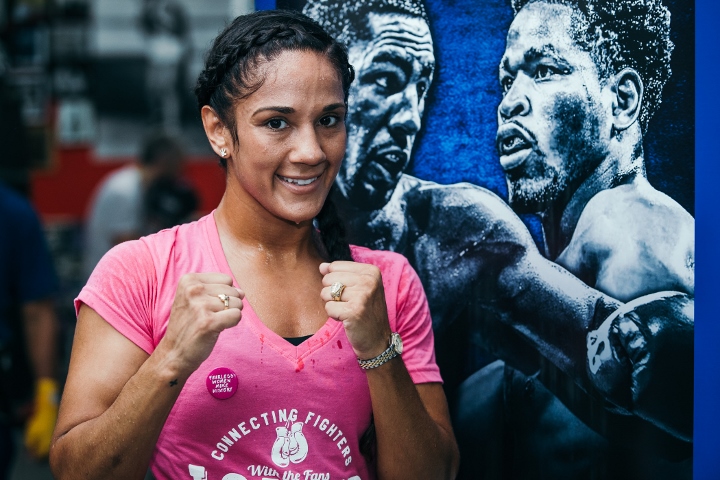 The 31-year old Puerto Rican southpaw hit the road in August 2014 to stop then-reigning 135-pound titlist Maria Maderna in six rounds for her second divisional title. Title wins in five more weight classes would follow, making her the most belted female boxer in history. An 8th round knockout of Dahiana Santana netted her a bantamweight title in April 2017, her fifth division conquered to establish the record with two more added to the lot, coming at 140 pounds and then all the way down to the 115-pound junior bantamweight limit last January. The feat also pushed her past Miguel Cotto as the only Puerto Rican boxer ever to win titles in more than four weight divisions.

“Miguel Cotto is my idol and has always been,” admits Serrano. “I knew he’d won titles in four divisions. I wanted to do the same but I was still young [when she matched his feat in 2016] and said, ‘I want to do even more.’ Now I’ve won [in] seven.”

Serrano’s career achievements were properly celebrated in a breakout 2019 campaign. The 12-year ring veteran was honored by the Guinness Book of World Records at the annual Puerto Rican Day Parade last June in New York City, which took place mere blocks away from her 35-second wipeout of Eva Voraberger that prior January at Madison Square Garden’s Hulu Theater. The win netted her a junior bantamweight title, coming five months after having weighed 25 pounds (six full weight divisions) heavier for a 140-pound title win in her Brooklyn backyard.

A win over Taylor will accomplish something which no Puerto Rican boxer—male or female—has achieved in the three- or four-belt era.

Jose Torres is Puerto Rico’s only ever claimant to an undisputed championship, coming in his March 1965 light heavyweight win over Willie Pastrano when the sport was in the infancy of expanding to two major sanctioning bodies (World Boxing Association and World Boxing Council). Of the island’s 64 title claimants, none have ever held more than two belts at a time.

Serrano is now one fight away from changing that dynamic and once again etching her name in the record books. Taylor will enter the ring with the WBA, WBC, IBF (International Boxing Federation) and WBO (World Boxing Organization) ttiles—and lineal championship—in tow. The plan is for the Irish superstar to leave empty-handed.

“I want to be the first Boricua to become undisputed champion,” notes Serrano. “That would be nice.”

[QUOTE=Beercules;20561858]I've never been there. My family is from Ponce[/QUOTE] I understand. I was born in Ponce in the houses near where are the ship dock of Ponce in Alfonso XII. Me too had family members in Ponce, but they move…

[QUOTE=Dasmius Shinobi;20561833]She born in Carolina, Puerto Rico and live there little time before her family move to Brooklyn New York and live her life in USA.[/QUOTE] I've never been there. My family is from Ponce

[QUOTE=Beercules;20561634]Good for her. I'll be rooting for her. Where is she from on the island ?[/QUOTE] She born in Carolina, Puerto Rico and live there little time before her family move to Brooklyn New York and live her life in…

Amanda Serrano is going to do it, that I am certain she going to make our proud and happy as Boricua, but lamentably is not the same as having someone like Wilfredo Benitez, Tito Trinidad or Miguel Cotto to name…