Coming into this fight, Chilemba held a 3-0 win streak over Russian fighters and vowed that he would never lose to a Russian. That streak was obviously broken.

The victory moves Kovalev forward with a fall HBO Pay-Per-View showdown with Andre Ward (29-0, 15KOs). Ward now has to do his part by winning his scheduled fight on August 6th against Alexander Brand in Oakland, California. 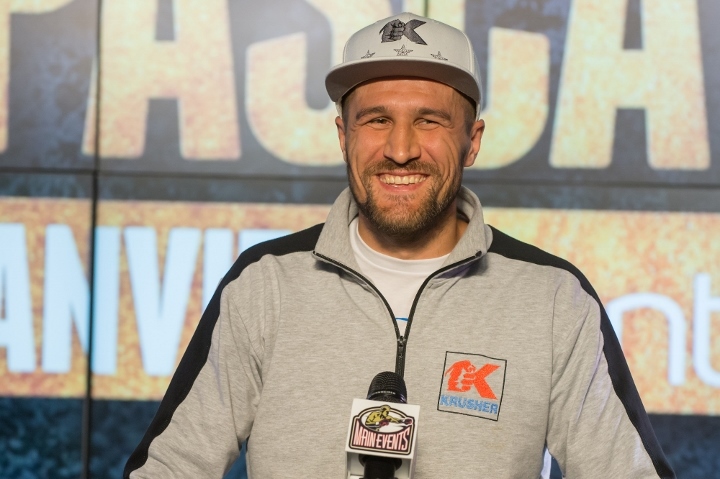 Chilemba, 29, fought his best against a man, considered by many to be the best 175lber in the world, and had to visit the canvas once en route to a spirited loss to the Russian hard-hitter.

Not everyone considered WBO #11 and WBA #12 rated light heavyweight to be a live dog against one of the most feared punchers in the game. For many this clash was a non-title attraction even despite all the hardware that Kovalev owns. Straps away - it was a reminiscent of another bout, which featured another Russian megastar Kostya Tszyu in a presumed all-title warm-up exactly fifteen years ago, which turned into a much-harder-than-predicted boxing affair. That time WBA/IBF light welterweight champion Tszyu was also a fight away for his own dream match-up versus WBC champion Zab Judah, and had to work extremely hard to overcome undefeated but untested Germany-based Turk Oktay Urkal. It resulted in a close decision win, which transformed into the brightest moment of entire Kostya's career in just several months when he finished Judah for the undisputed crown.

Chilemba proved he had something to offer to Kovalev, 33, from the very beginning. He didn't produce fireworks, and it wasn't expected from him, but he remained focused, resilient and moved in a sneaky to avoid the danger of being punished. The Krusher led his game with a jab but it wasn't as effective as usual. Still, from the neutral standpoint, Kovalev was the boss, and Chilemba was not. He didn't create enough offensive opportunities to remain on the same desk with Kovalev but he did enough to remain competitive. The pattern was the same in the first three rounds.

In round four, Chilemba started to apply changes to adjust to his opponent. He used his timing to meet Kovaledvwith a stiff jab in the middle of the ring and added left hooks when he had a chance. His jab was a game-changer in this round as Chilemba used it well enough to stop Kovalev in his tracks. The Russian looked clumsy at times - a rare look for a fighter, which is thought to be a top-5 P4P entrant - and was outboxed in some telling episodes. Chilemba surprised Kovalev with a sudden assault to start the fifth round, and the Russian ate some leather before he retaliated in the second half of the round. Kovalev evened things up in the sixth but Chilemba was one who was riding his game during that period of time. Solidifying his claim was a moment, when Kovalev was tripped and went down to the canvas - even though this fall was rightfully ruled a slip by referee Bruce Fitch.

Sensing the bout was heading in the wrong direction, Kovalev made his subtle adjustments in round seven. He was still tagged at times but his right hand was finding Chilemba's head with increased regularity. Chilemba wasn't hurt but he was forced to duck and cover under fire. Finally, at the end of the round Kovalev landed a very painful left hook to the ribs, which was well felt by the Malawian. Kovalev went straight on and landed a vicious right hand to the jaw, which finally had the African down - this time for real. Chilemba was up at eight and survived the round. The next one was another challenge but the Malawian summoned all his durability to get through those three minutes as well, and he did just that.

From that point, Kovalev was the boss effectively. His jab was harder and sometimes sharper than that of Chilemba, and his punches were felt better than vice versa. The African had meager chances but they were disrupted by the Russian who instead used his superior boxing skills to outpoint and outbox Chilemba. The Krusher went in for kill during the last round, hurt and bloodied his foe but Chilemba did enough to survive and to become Sergey's toughest title opponent.

Grizzled welterweight veteran Alexey Evchenko improved his record to 12-10-1, 6 KOs, after a minor upset over Viskhan Murzabekov (12-2, 6 KOs) in a unanimous decision win over eight rounds. Murzabekov has lost his second straight.

Thought the fight was super close. Had Kovalev winning by 1 point only and as you can see he is one of my favourite fighters. I felt like he showed big weakness and I'm pretty sure Ward does his usual…

[QUOTE=ƒearless;16868220]He's got a point. Boxing has seen a HUGE decline with boring fighters at the top, NO MATTER THE RACE. Tyson was fkn exciting. People loved him for that shlt. Wladamir Clinchko? not so much.. Bring back EXCITEMENT to Boxing…

Immediately after the fight, the poll had 5 votes for Kovalev by decision. In the days following the fight I've watched that number grow to 14 votes.....I've seen the same thing happen with other fight polls on this site. WTF?…

[QUOTE=aboutfkntime;16867249]HAHAHAH sure you did, cool story bro :lol1:[/QUOTE] He's got a point. Boxing has seen a HUGE decline with boring fighters at the top, NO MATTER THE RACE. Tyson was fkn exciting. People loved him for that shlt. Wladamir Clinchko?…

[QUOTE=Boxing Logic;16865584]What do mean by what EXACTLY did I mean? What did you think I meant lol? Because when you're trying to grow the sport, and bring in new fans, and you tell fans, "this is the best entertainment we…