Seniesa "Superbad" Estrada (16-0, 6 KOs), one of the most important female boxers of this era, will look to take over Hollywood, Calif. as she defends her WBC Silver Light Flyweight Title for a second time in a 10-round main event against a soon-to-be announced opponent. The event will take place on Thursday, June 13 at Avalon Hollywood.

The fights will be streamed live on Facebook Watch via the Golden Boy Fight Night Page beginning at 10:00 p.m. ET/7:00 p.m. PT. The series will also be available on regional sports networks around the nation. 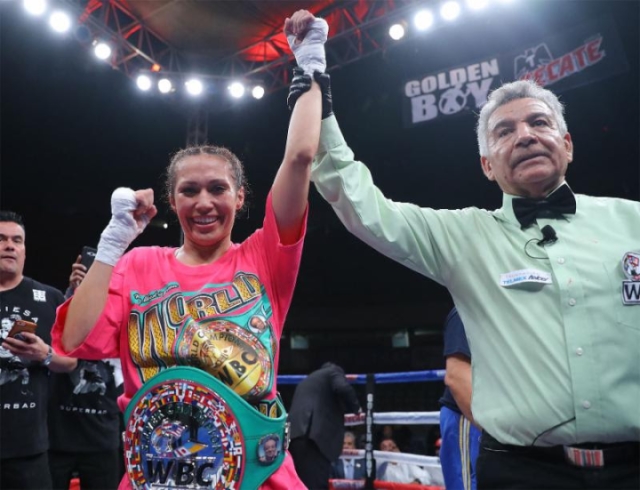 Estrada is a native of East Los Angeles, Calif. who earned multiple titles as an amateur boxer before turning professional in 2011. Since then, the 26-year-old has developed into one of the biggest names in women's boxing, fighting on important cards in Southern California and in Mexico, where she captured a regional title in November 2018. Estrada plans to fight for a world title in the near future, but she'll have to get passed a tough opponent that will be announced shortly.

"I'm excited fighting at home again," said Seniesa Estrada. "My last two fights were in Mexico, so it's cool to be fighting in front of my fans, friends and family who will be coming out to support me as I defend my WBC Silver Light Flyweight Title. I think this will be the last time I defend it before I challenge for a world title. I have high hopes that we can sell this place out because I know my fans have been waiting for me to fight in Los Angeles. I expect it to be a great event!"

In the co-main event, Armenian contender Azat "Crazy A" Hovhannisyan (16-3, 13 KOs) will face Glen Porras (32-8, 20 KOs) of Cotabato, Philippines in a 10-round super bantamweight fight.

Pat Manuel (1-0) of Duarte, Calif. will open the night in a four-round super featherweight fight.

The opponents for this event will be announced shortly.

I would love to see a fight between her and Marlen Esparza!!