Savannah Marshall continued her rise in the ranks of the sport with yet another win.

The Hartlepool super-middleweight was in action on Friday at Manchester’s Victoria Warehouse, exclusively live on iFL TV.

Marshall, 27, is the current WBA Inter-Continental champion, having won the vacant belt out in Bulgaria two weeks ago against Yanina Orozco over 10 rounds. 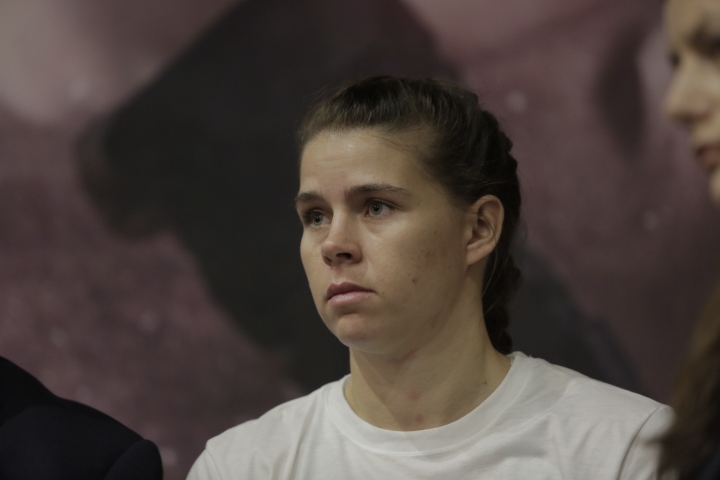 And ‘The Silent Assassin’ added to her unblemished ledger with a straightforward second-round stoppage over Klaudia Vigh, as part of the MTK Manchester card billed ‘War At The Warehouse’.

The fight was concluded after 65 seconds of the second round as trainee referee Andy Brook called a halt to it, deeming Vigh, who had been dropped once in each round, to be in no position to continue.

Marshall, trained by Peter Fury, has now moved to 5-0 with three early finishes.

Brian Rose warmed up for his vacant WBO European middleweight title clash against Conrad Cummings – after champion Luke Keeler was forced to relinquish the title due to injury – with a six-round win over Alistair Warren.

Rose will face Cummings on December 7 at the Titanic Exhibition Centre in Belfast, Northern Ireland, exclusively live on BoxNation, on the back of securing a 58-57 win which was scored by Mark Lyson.

Meanwhile, Ryan Oliver got a six-round win over Fonz Alexander, from Newark, who took the fight on just three hours’ notice.

There were also points victories for Damian Chambers against the tough and durable Elvis Dube, welterweight Sahir Iqbal – who dropped MJ Hall in the second round en-route to a 40-35 win – and light-heavyweight Michael McGoldrick, who gave up just a round against Lewis van Poetsch over four.

Adam Hague gave up just a round against Reynaldo Mora before claiming a 60-55 victory.

And Hosea Burton scored a shutout victory over Arturs Kulikauskas.

[QUOTE=Randall Cunning;19262059]Hearn needs to back her. Hes getting all the women on DAZN .[/QUOTE] She's tied down with the best promoter in the UK, Mick Hennessy.

[QUOTE=Vinnykin;19261955]Savannah vs Shields will be one of the 2 women's fights I am interested in.[/QUOTE] Hearn needs to back her. Hes getting all the women on DAZN .

[QUOTE=Vinnykin;19261955]Savannah vs Shields will be one of the 2 women's fights I am interested in.[/QUOTE] Shields is a fat midget, Marshall should school her.

Savannah vs Shields will be one of the 2 women's fights I am interested in.