Saunders Misconduct Hearing Could Be Held By Video Conference

Billy Joe Saunders’ misconduct hearing could be held by video conference as the British Board of Control (BBBoC) hope to get to the matter resolved before the coronavirus pandemic is over.

The WBO super middleweight champion had his licence suspended pending a hearing after posting a video on social media giving tips for how punch a woman.

With the BBBoC’s offices in Cardiff closed during the coronavirus pandemic, moves are afoot to hold the hearing sooner rather than later, in case the matter could drag on for months. But with a panel unlikely to be able to meet in the same room, holding the hearing by video conference is being explored. 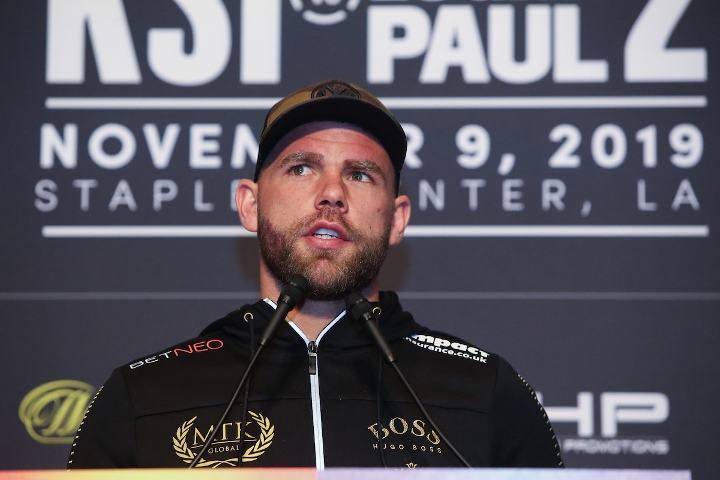 Saunders said the video was a joke and apologised for it, adding that he would donate some of his next purse to a domestic violence charity. But it is just the latest in several bad taste social media postings he has made. In 2018, he was fined £100,000 by the BBBoC for bringing the sport into disrepute after a social media post showing him offering a woman crack cocaine in return for hitting a passer-by.

He first fell foul of the authorities for a video in 2008, when he was sent home early from the Beijing Olympics after a video emerged showing him behaving in an obscene manner towards a woman at a hotel during a training camp in France.

In another video in 2018, he apparently pretended to be a policeman and forced a man to strip, while he also starred in another throwing chicken at Deontay Wilder in a Belfast restaurant.

Saunders had been expected to be boxing Saul “Canelo” Alvarez on May, but that has never been formally announced and is now on hold because of the coronavirus pandemic.

Should the BBBoC decide on a long-term suspension of Saunders long-term, it could permanently derail that fight.

It is unlikely that his licence will be simply withdrawn, as happened with Dereck Chisora after his press conference brawl with David Haye following his loss to Vitali Klitschko in 2012 – one of a series of misdemeanours by Chisora that weekend in Munich – as that left Chisora open to simply to apply for a licence with a different commission.

It appears more likely that he will get another sizable fine, possibly with the added condition that he attends some sort of domestic violence awareness course. All fines imposed by the BBBoC go to their charity, which gives grants to former boxers and their families who are either down on their luck or have suffered injuries, which would at least ensure than people who need the money benefit from the episode.

You gotta wonder what his kid's are gonna turn out like. One of them already cracked Willie Monroe's nut's! :firedevil

Geezus. They're really going to town on bijs. And i still haven't seen the video.

A hearing over a joke, he has to be dragged through the mud for obvious satire, it's OFFENSIVE!!! They cry, what a shame. The guy is a crappy human and everyone already knows that, he shouldn't be suspended plain and…