It was a schooling from Saunders, bar a lapse in concentration when he was caught with a flush right in the sixth, who has had his fair share of controversial incidents outside the ring since brilliantly defending the WBO middleweight strap against David Lemieux in December 2017. 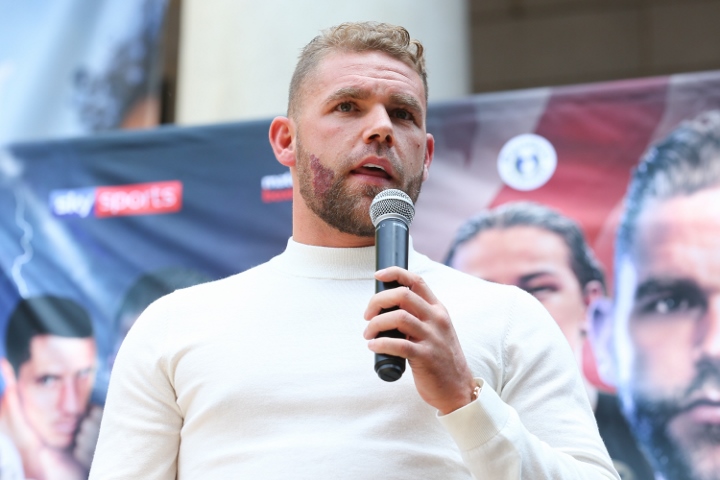 Saunders talked up the possibility of a domestic dust up with Callum Smith, while suggesting the likes of Gennady Golovkin and Saul 'Canelo' Alvarez have avoided him due to his style in the ring.

"Listen, my first 12-rounder at super middle. I said when I come back I don't want to fluff around," Saunders, who improved to 28-0, told BT Sport.

"He caught me in the sixth. It didn't have me where my legs were gone. I haven't been in a meaningful fight for 14 months. He's number one with the WBO for a reason so he's obviously good.

"My boxing ability will always get me further in the sport I believe. Thanks to my trainer Ben Davison for putting the weeks into me in camp.

"I want the big fights, the big names. The big domestic fights, unification fights. I moved up from middleweight as none of them would fight me.

"I could be out again in eight or nine weeks on the O2 Arena card on 13 July as I wasn't really pushed too hard there.

"Every time I put a name out of who I want, it never happens. I'd like to make the Smith fight as it would be brilliant for the fans. I know he may have other plans next so it may not stack up next.

"Golovkin and Canelo do not want that style I have."

[QUOTE=budfr;19757773]Hay coward, fight Benavidez or Zurdo Ramirez ...[/QUOTE] Finally someone mentioning Benavidez. I realize he was inactive and coming back from punitive measures, but shouldn't David Benavidez be considered a threat to dominate the Super Middle Weight division ? Granted,…

[QUOTE=MPDKSAB;19771014]Whew! 😰 I almost believed you were serious for a second. Anyway does anybody know what happened to the option to change between mobile/desktop/style options?? I'd greatly appreciate it if someone could inform me on what happened to that...[/QUOTE] wow,…

[QUOTE=aboutfkntime;19768248]Golovkin had 3x opportunities to fight Saunders..... 1) Golovkin ducked Saunders with an OBVIOUS $1.5m low-ball, and then quickly ran off to fight Dominic Wade..... with [B]NO COUNTER-OFFER[/B], that was a take-it-or-leave-it lowball..... oh, immediately after that fight, Saunders watched…

[QUOTE=MPDKSAB;19764368]If you give anybody in the sport damn near the option to fight whoever or Canelo, they're going to pick Canelo. BJS is on record saying "GGG would destroy me & you the same night." There's no avoiding someone like…

[QUOTE=Mexican_Puppet;19758199]Lemieux? Marco Rubio K.O'd him Andy Lee? Chávez JR K.Od him Lol, you don't know about boxing They are b class fighters[/QUOTE] What good fighters haven't been beaten before? You're an idiot p*** off