The super featherweight prospect returned to the ring after after a nearly 21 month layoff and stopped Claudio Rosendo Tapia in the second round of their bout that was scheduled for 10 rounds.

The fight took take place on the Miguel Berchelt-Mickey Roman undercard in El Paso, Texas that was streamed on the ESPN+ App. 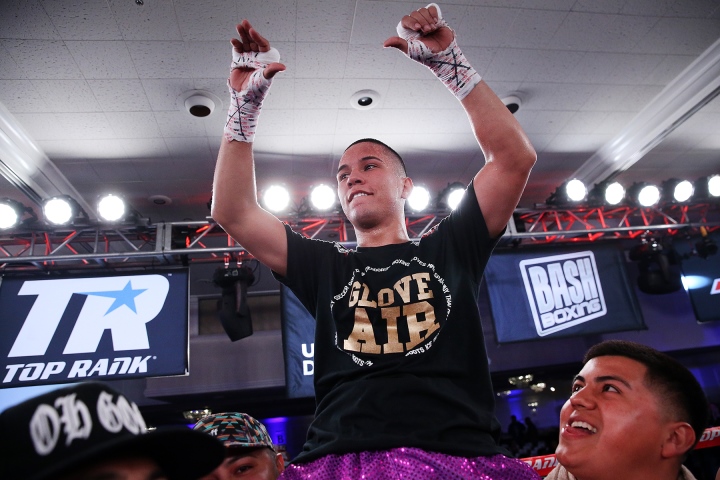 The hard hitting Rodriguez went right to work dropping the over matched Argentine in the first round. From the moment Rodriguez landed his first flush punch, he knew his opponent won't be able to handle his power.

"I hit him hard with my right hand and his eye was swollen in up in just seconds," Rodriguez told BoxingScene.com the day after the fight.

The fight wouldn't last very much longer as Tapia hit the canvas again in the second round and it wouldn't be much longer before referee Robert Velez waived the fight off.

Overall Rodriguez was happy to finally get back in the ring but wasn't overly impressed with his performance.

When asked to give himself a grade he said, "I would give myself a 6 out of 10. I felt a little ring rust but I expected that to happen. I know that I'm capable of doing a lot better."

Rodriguez came out of the fight with just a little mouse under his eye and plans on getting back to work very soon. He plans on returning at the top of the new year.

"It felt really good to be back. I should be back in either January or February. I am going to be really active in 2019," said Rodriguez.

In the main event, Berchelt retained his WBC super featherweight title with a ninth round stoppage victory over Roman.

I was hoping he'd get in more rounds after sitting on the shelf for two years but oh well. Welcome back Neno! :boxing: Future champ.