Santa Cruz: I'll Probably Wanna Go Out There & Brawl With Davis, Make It A War

Santa Cruz just hopes he doesn’t ignore his head trainer’s instructions once the opening bell rings Saturday night at Alamodome. The Mexican warrior within Santa Cruz might make the four-division champion test Davis’ vaunted power more than he should during their Showtime Pay-Per-View main event.

Santa Cruz hasn’t been knocked out in 39 professional fights and has been knocked down only once, when he took a knee after Robert DaLuz landed a rabbit punch 11 years ago. Nevertheless, the underdog alluded Thursday during their final press conference to heeding his father’s advice versus Davis, who has knocked out 96 percent of his opponents (23-0, 22 KOs).

“We Mexicans have big hearts,” Santa Cruz said. “My dad’s telling me to be smart, you know, to fight a smart fight, not to get hit with big punches that he throws. But you know me, even though my dad’s gonna tell me that, probably I’m gonna wanna go out there and get into a brawl with him, you know, make it a war [when I] go out there. But, you know, I’m gonna listen to my dad. You know, he’s the smart one. He’s the one who’s gonna tell me what to do. And as the fight is going, he’s gonna be telling me how to fight him and we’re gonna find a way to beat him.” 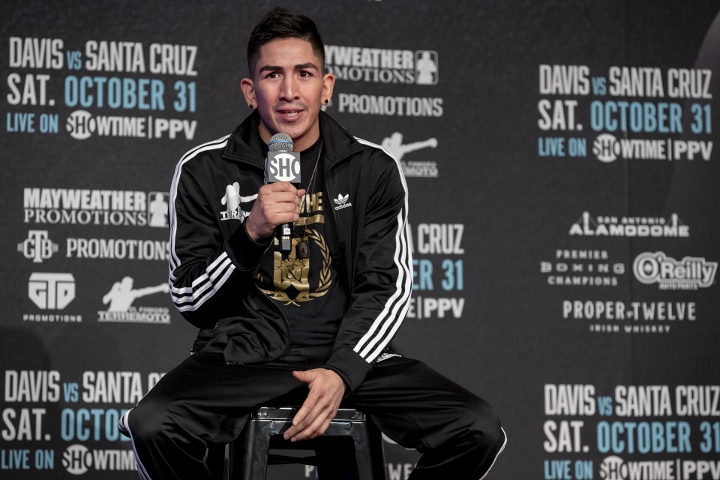 Davis didn’t read too much into anything Santa Cruz said Thursday. He doesn’t expect his 32-year-old opponent to be overly aggressive during the early portion of their scheduled 12-round, 130-pound title fight.

Only one of Davis’ 23 professional fights have reached the 12th round. The powerful southpaw stopped Yuriorkis Gamboa in the final round of that bout, a 12-round, 135-pound title bout 10 months ago at State Farm Arena in Atlanta.

Davis dropped Cuba’s Gamboa three times, once apiece in the second, eighth and 12th rounds. Referee Jack Reiss halted the action at 1:17 of the 12th round, as soon as Gamboa (30-3, 18 KOs) went down for the third time.