Sam Eggington will face Brandon Cook on the undercard of Dillian Whyte’s crunch Heavyweight clash with Joseph Parker at The O2 in London on July 28, live on Sky Sports Box Office.

‘The Savage’ steps up to the plate at short notice after an injury forced Sheffield’s Kell Brook to withdraw from his World Super-Welterweight title eliminator with Cook.

A revived Eggington has made short work of his opponents since moving up to Super-Welter and knows that a win against Canada’s Cook will rocket him into title contention at his new weight. 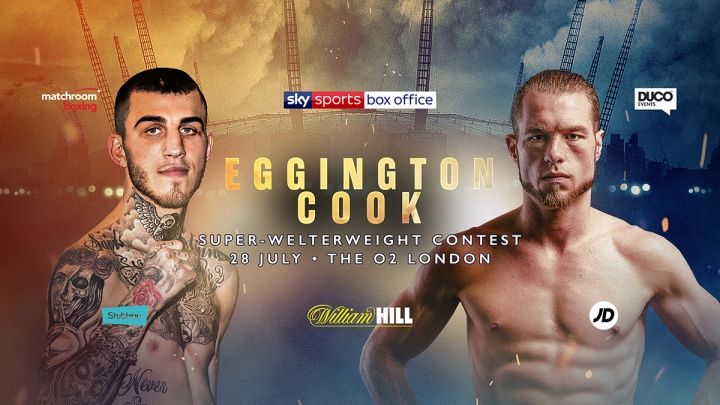 “I’m buzzing to get back to the O2 on a massive PPV show,” said Eggington. “There was no way I was turning down this fight when they offered it to me. Cook likes to come forward and fight so I’m predicting a war, he’s going to try and make it a hard night for me.

“He’s ranked highly in three governing bodies so getting a win against him would do me wonders. Moving up to Super-Welterweight has given me even more energy to grind down my opponents and do damage late on and I’ll be looking to do exactly that next week.”

“I’m delighted that I’ll still be fighting in London on July 28,” said Cook. “All of my hard work in the gym isn’t going to waste and I’m excited to show the British public what I’m all about. Sam is a tough opponent that comes to fight so I’ll need to be at my very best to beat him.”

Elsewhere on a massive night of action at The O2, former Heavyweight World title challengers Dereck Chisora and Carlos Takam clash for the WBA International Heavyweight belt in a must-win match up, Joshua Buatsi goes for his first pro title when he fights for the WBC International Light-Heavyweight crown, Katie Taylor defends her WBA and IBF World Lightweight titles against Kimberly Connor, Conor Benn and Cedric Peynaud rematch after their fight of the year brawl in 2017 and unbeaten Super-Welterweights Anthony Fowler and Craig O'Brien meet over eight rounds

[QUOTE=Mammoth;18951231]What are mongs?[/QUOTE] like retards just look at eggintons eyes theres no life in them guys brain dead souless

[QUOTE=SOLARPLEXUS;18950646]It being sold on PPV by ITV has nothing to do with their purses, they don't see any backend, ITV own the licensing and will sell a minuscule amount as only hardcores will buy it. 400k buys is the target…

Can live with this

Battle of the mongs.