Sam Bowen added the WBO Inter-Continetal super-featherweight title to his collection, as he blitzed his way past Argentine Horacio Alfredo Cabral in four rounds at the Morningside Arena in Leicester, exclusively live on BT Sport.

“The Bullet” who has been billed as a future star was making his televised debut and was fresh off winning the British title in April, lived up to all the hype surrounding him, ending matters with a sickening body shot that folded Cabral in two as the fourth round came to a close.

Bowen, worked well behind a solid jab and relentlessly pressed forward, never allowing Cabral a second off. Cabral last year travelled to Canada to upset then unbeaten Logan McGuinness and had designs on derailing another prospect. However, he had no answer for Bowen. 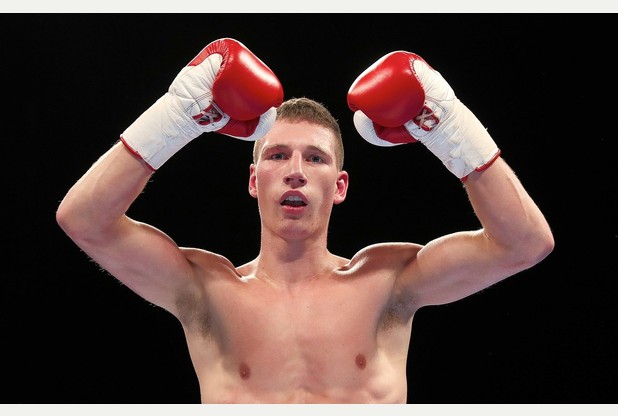 The 26-year-old from nearby Ibstock, playing his role as part of the supporting cast to Jack Catterall’s WBO super-lightweight eliminator against Ohara Davies, was a little tense in the opening round, however the right hand started to come into play as the round went on, the nerves slowly disappearing once he settled down to his work.

Bowen smothered his work a little in the second, as Cabral went out trying to spoil on the inside. However, Bowen’s strength was a major factor, as he kept creating space to work, landing with a stiff uppercut which rocked Cabral’s head back.

A big left hand early in the third, saw Cabral find his bike and pedal away at speed, however he replied with a quick flurry to remind Bowen he was still in a fight. His lack of power showed, as the shots simply bounced off the advancing Bowen, who by the end of the round was showing glimpses of his massive potential.

Cabral was really beginning to feel the pace in the third and Bowen sensing the stoppage was close, picked the action up a gear. Cabral, who earlier had his gloves down was now retreating into a tight guard, until a body shot came crunching in just as the bell was about to sound to signal the end of the fourth.

Referee Howard Foster administered the count, but Cabral was never getting back up and Bowen was left to celebrate a big win and a berth in the next WBO world rankings, leaving with the Inter-Continental strap in his possession.

Next up for “The Bullet” will be the first defence of his British belt against strong southpaw Ronnie Clark, possibly on the 22nd December, as part of the undercard to Josh Warrington’s defence of his IBF featherweight crown against Carl Frampton, which will be shown on BT Sport Box Office.

Bowen isn’t a secret any more and you won’t want to miss him again.