Salido Adviser Holds Nose at Loma-Rigo: The Real Fight is in Vegas

There are competing cards tonight on HBO and ESPN, where both have broadcasts featuring fighters from the super featherweight class.

ESPN has the showdown between WBO world champion Vasyl Lomachenko and challenger Guillermo Rigondeaux in a battle of two-time Olympic gold medal winners from the Theater in Madison Square Garden in New York City.

While HBO has a tripleheader which has a main event between Mexican sluggers Orlando Salido and Miguel Roman from the Mandalay Bay Events Center in Las Vegas, Nevada. 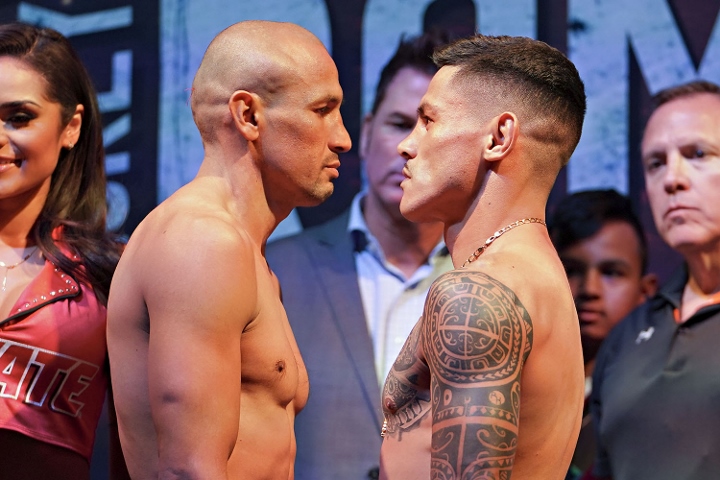 Salido's adviser, Sean Gibbons states, "The [real] fight is here, this is Mexican boxing, this is real boxing. Again, there's another fight somewhere and I've seen a lot of publicity on it and I see one guy who look likes Charles Atlas (Rigondeaux) - and he looks as old as Charles Atlas - and he looks like he's bulked up so big that I'm not even sure he's going to throw punches correctly. The other guy is what he is.

"But y'know what, I'm not here to talk about that fight. I can tell you: December 9th, 'fight of the year' candidate, Orlando Salido-Miguel Roman at the Mandalay Bay."

So just what version of 'Siri' Salido will we get this weekend?

"I can see Orlando Salido's rebirth," stated Gibbons. "The guy had basically retired twice over the last six months. He was frustrated with the sport and what happening, the politics and (Francisco)' Bandito' Vargas running from him, issues with Golden Boy. So I did the best thing I ever did in my life - I hired 'Memo' Heredia and his father. Orlando Salido feels like he's making his pro debut, not a 37-year old athlete. The guy is excited mentally and physically.

"I jut see him blowing through Miguel Roman like the A-side should do."

HBO card will without a doubt have more action. But a mexican war happens a few times throughout each year. Loma-Rigo is once in a lifetime.

One is a 4 Michelin star meal, the other is meatloaf and mashed taters.

[QUOTE=MEXfistology;18318020]Im a very proud Mexican, and love when two Mexicans face each other, those are real wars...but even I know that the real event is happening in new york, on paper I don't think we've ever seen something like it,…

Im a very proud Mexican, and love when two Mexicans face each other, those are real wars...but even I know that the real event is happening in new york, on paper I don't think we've ever seen something like it,…