"Honestly, I didn't look good in there," said Ali. "I felt like I won sloppy. Herrera made me look terrible in there. He's a rugged fighter. And I fell in there that last moment of the fight the same way I fell when I fought Miguel Cotto. I felt like the cards were a lot closer than what the judges said they were."

"It was an okay fight," said Herrera. "I had to shake a lot of the rust off, but it was a good pace. Overall, I thought I won the fight. I had him missing a lot in there, and I wasn't that tired. 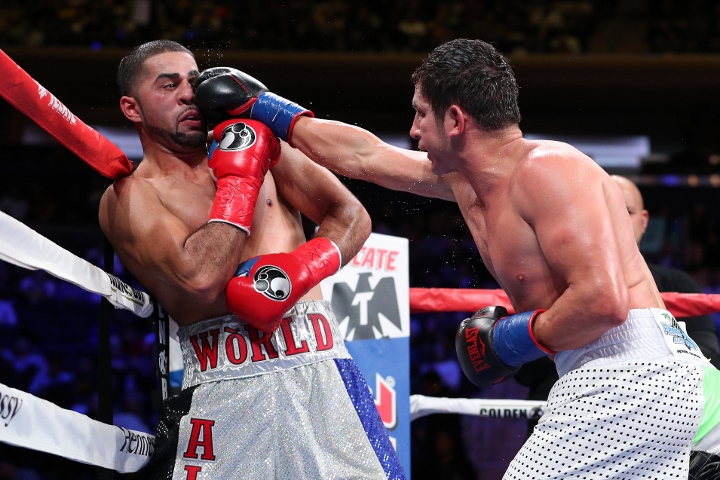 Also on the card, Ryan Garcia (17-0, 14 KOs) of Victorville, Calif. stopped Braulio Rodriguez (19-4, 17 KOs) of La Romana, Dominican Republic via knockout in the fifth round of a lightweight bout originally slated for ten rounds. Garcia won with a time of 1:14 of the aforementioned round.

[QUOTE=PBR Streetgang;19362055]Damn, that brings back some memories. I went to that fight with my high school friends (grew up right down the road). Saw Barrera on the undercard as well as Omar Sheika. We all thought Botha won the fight…

[QUOTE=joe strong;19360980]Shannon Briggs vs Francois Botha. Botha won on most media & fans cards but it was scored a draw by the judges. Botha to Jim Gray “ I thought I did enough to win” Botha was always a humble…

Sadam looked SHOT last night and i doubt it had anything to do with Herrera's craftinass. Sadam was more effective missing shots than landing them. No snap to his punches and seemed toooo eager to hold and flurry to steal…

[QUOTE=Southpawology;19361149]Herrera is crafty and battle tested its hard to look pretty against him. Hes like a welterweight salido.[/QUOTE] Yeah except Salido is actually good.