Ryan Martin is ready to resume his career after undergoing a roundabout rebuild.

Since last November, his life has been a dark and turbulent ride. First, he suffered his first career defeat when he was dominated by Josh Taylor in the WBSS. Shortly afterward, VADA revealed he tested positive for the banned substance exogenous testosterone. Then, the promotional free agent split with manager Tim VanNewhouse and took a break from trainer Abel Sanchez as he sought solitude during an immensely uncertain time of his career.

“Problems outside of the boxing ring will always be undefeated,” Martin told BoxingScene.com in an interview. “When a fighter is taking something into the ring with him that has nothing to do with the actual fight, it’s a distraction. Every situation I’ve been through is a learning experience. I don’t have the burden of dealing with things outside of the ring anymore.”

The 26-year-old Martin (22-1, 12 knockouts) recently signed with South Florida-based manager Peter Kahn to resurrect himself in the ring and return to prominence. Business aside, one of the other problems Martin had been dealing with in recent months, in addition to settling his contract with VanNewhouse, were the ramifications of his failed drug test during the Taylor fight that led to a six-month suspension.

“The whole testing situation has damaged me a lot. A lot of people think I’m a cheater. I’ve been drug tested so many times, I’ve never failed one. Nothing ever popped up. When this happened, it was very disturbing for me,” said Martin. “Everyone knows I’m a very clean fighter. I ask a thousand-and-one questions about every supplement I take. I’m fighting to clear my name. It’s been slow and hard.” 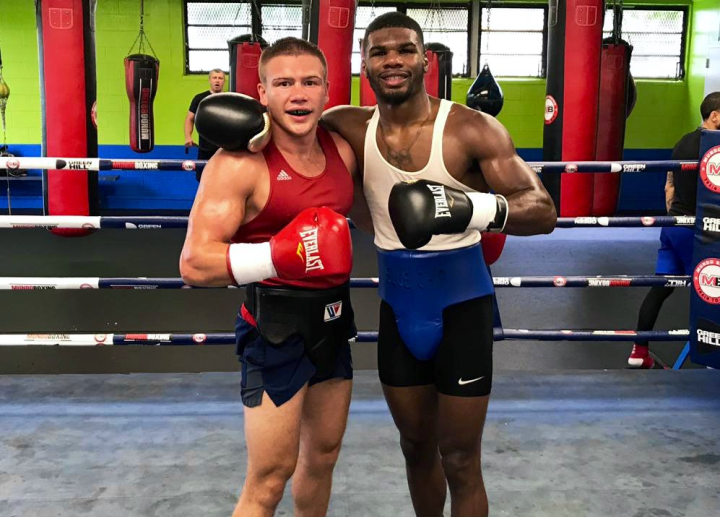 BoxingScene.com obtained a document detailing the ruling levied on Martin by the WBC.

In the document, dated March 29, 2019, Martin indicated that his camp was unaware of his supplement regime. He said “that if any supplement(s) that he took might have contained traces of any WBC [Clean Boxing Program] banned substance, such ingestion would have been accidental and unintentional.”

The WBC statement reads: “Mr. Martin and his representatives were extremely candid, cooperative and forthcoming with the WBC Investigation. Mr. Martin offered his sincerest apologies to the WBC, his opponent and all those affected by the Finding. He took responsibility for everything he puts into his body and displayed a sincere willingness to remain an exemplary clean athlete, to take affirmative steps to ensure that there are no future findings, and to comply with the WBC CBP mandates … At the conclusion of the WBC investigation detailed below, Mr. Martin: (a) waived his right to witness the opening of the "B" Sample; (b) requested that the "B" sample not be tested; and (c) accepted the finding of the presence of metabolites in his "A" sample consistent with exogenous testosterone.”

“At the end of the day, I know that I’m a clean fighter and I don’t need drugs or anything to enhance me. I take pre-workouts and vitamins. There’s no point in using a drug if I know I’m being tested. I have no problem getting tested,” said Martin. “The only thing that came to light going through the investigation was a supplement called ‘Bucked Up.’ It’s a pre-workout. It had ingredients of deer antler velvet, which I don’t know anything about. They said it was a banned substance.”

On the Bucked Up website, which sells over-the-counter supplements at GNC and VitaminShoppe, among other retailers worldwide, it says that “Deer Antler Velvet comes from red deer in New Zealand … Deer are the only mammals to regrow tissue in such a way, and at such a rapid rate, making it high in the growth hormone, IGF-1. For thousands of years, these pre-calcified antlers have been used in Chinese medicine. With the help of our spray, you now have access to these same benefits. Supports muscle recovery and repair; supports increased libido and energy; supports healthy joints.”

On the Deer Antler Velvet IGF1 Spray Supplement product description page, it says that Bucked Up “has been known to speed up the rehabilitation process of injuries, especially injuries affecting cartilage. It has also been known to boost endurance and strength, increase muscle mass, decrease fat, and raise one's testosterone levels, thus increasing libido. The use of Deer Antler Velvet Spray has been linked to several athletes, including football star Ray Lewis, who is rumored to have used it following an injury to his tricep in 2013.”

Martin, who is part of the WBC Clean Boxing Program, is still under UKAD suspension because their investigation is still ongoing. He was adamant that there’s “definitely no room in boxing for performance-enhancing drugs at all.”

“There are a lot of moving parts and questions that still need to be answered that could have played a role in that positive test,” said Kahn, who’s in dialogue with UKAD, VADA and the WBC to have clarity on the situation and resolve it. “There is still doubt, however, the key is looking forward and ensuring that it won't happen again.”

“It’s going to take time to show people I’m a real fighter. Everything else over time will just get better … I know my next outing has to be one of the best outings. The Josh Taylor fight, that wasn’t even 2 percent of me in that fight. That was not me. I’m not taking anything away from Taylor. He’s a great fighter. There was so much going on outside of the ring, my mental state was not in that fight. My mind was blank going into that fight. It was just a disaster, man.”

Martin is in a better place now and just wants to focus on training and fighting and let everything else handle itself out.

In July, he tapped into the managerial services of Kahn, who helped the fighter reach a settlement with VanNewhouse. Kahn, who manages the likes of Amir Imam, Dennis Hogan and George Kambosos, said he’s speaking to a number of top promoters who are interested in working with Martin.

After Martin parted ways with one-time promoter 50 Cent, he tapped into Tom Loeffler, who guided Martin and put him on the undercards of Gennadiy Golovkin.

“Everyone faces adversity in their career and it's how you bounce back that defines you. Ryan is still a work in progress and his best fighting is still ahead of him,” said Kahn. “He’s a tremendous athlete. He's young and is just beginning to enter the prime years of his career. I've been able to watch his work ethic first hand.”

“Peter gave off a good vibe. He helped me a lot. We’re still getting a feel for each other, but he’s not on the outside looking in. He’s in the situation,” said Martin. “I’ve changed a lot business wise. My guard is very high as to who I trust right now, but Peter has stuck with me. I’ve heard a lot of great things about him from all kinds of fighters. I’m looking forward to seeing what he can make happen for me in the future, along with a promotional deal. I’m open to whomever will make me a priority, look after me and be behind me 100 percent.”

Nicknamed “Blue Chip” for his talented skill set, the Tennessean with the body and athleticism of a wide receiver and defensive back is still re-configuring his team and is on the hunt for a new trainer.

Martin’s been taking a break from Sanchez, the trainer for his last seven fights, and floating around different gyms looking to see if a change needs to be made there as well as part of a complete rebuild.

He’s considered trainers like Manny Robles and Brian Villoria in Los Angeles. Most recently, he visited Javiel Centeno’s Sweatbox Boxing & Fitness gym in South Florida and sparred and worked alongside the likes of Ivan Baranchyk, Xander Zayas and Imam.

“A trainer needs to take authority and charge. I love what Abel did for me and the changes he brought forth in my career. There are no hard feelings between me and him. We still talk. I haven’t made a final decision yet, but I’m still open to going back to Big Bear,” said Martin. “Javiel has been good to me, but I haven’t yet made up my mind on who I’ll be trained by, or where I’ll be. I think about it everyday on where I’ll end up long term. But everything is good so far.”

Martin said he wants a trainer who will provide structure with one-on-one, military-style leadership. He wants to be coached and be around a person who will also motivate him whenever needed. Martin would like to fight as early as October and is considering campaigning at the 135 and 140 pound divisions.

“Getting back to boxing full time has been a big joy. Everything is in the past now,” said Martin. “My mind is clear. It’s time to focus on new things and the journey ahead. I’m ready to get back in the ring. The sun is about to shine.”

I took them willingly. Said no one ever

Deer antler spray has no effect, lame excuse to hide his ped use. [url]https://examine.com/supplements/velvet-antler/[/url]

So many guys have left Sanchez in a years time. It's been evident that there really is no game plan in some of those fights. Golovkin probably showed these guys more things inside the ring than Sanchez did. It was…

Since when did health come out of a bottle? If it's legal, what's the advantage? Everybody can use it. If it's secret, then don't cry when they catch you. Supplements aren't science, might as well take Ginsen, eat duck nuts,…

VanNewHouse is one of the good guys in the business as best as I can tell. Him dropping him is a bad sign. Wonder if that was about him "cheating" more than business sh^t. Id be surprised to learn VanNewHouse…