Ryan Garcia: This Was Chance To Stand My Ground, Get Respect

Ryan Garcia had Sept. 14 circled on his calendar as a date where he would earn the industry’s respect.

He may have very well done just that, even if it never came in the ring.

The unbeaten lightweight prospect was an unfortunate scratch from Saturday’s show at Dignity Health Sports Park in Carson, Calif. after originally scheduled opponent, Philadelphia’s Avery Sparrow (10-1, 3KOs) was arrested on an outstanding warrant prior to Friday’s weigh-in. Efforts to secure a late replacement opponent for Garcia (18-0, 15KOs) instead led to an ugly and very public dispute between the 21-year old boxer and the staff at Golden Boy Promotions.

For reasons only the Golden Boy team can explain, the chosen approach with the media was to claim that Garcia had turned down numerous opponents, including Philippines’ Romero Duno (21-1, 16KOs) who was on the undercard and willing to take the assignment on short notice. He was just as willing when the fight was offered more than a month ago, whereas Garcia—who has been stuck in an ongoing battle with Golden Boy over a variety of issues—preferred a bigger payday and a headlining act for such a fight. 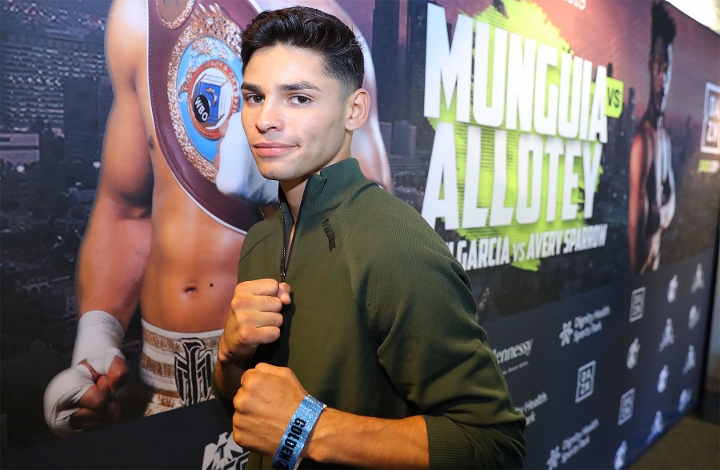 Garcia’s efforts to publicly set the record straight forced Golden Boy’s Eric Gomez to walk back previous comments, claiming it was never the boxer who rejected his fight but his team. Garcia trains under the watchful eye of Eddy Reynoso, who also guides the career of World middleweight champion Saul ‘Canelo’ Alvarez—who just over a month ago expressed his own displeasure with actions taken by Golden Boy over recent developments in his career.

Claims of Team Garcia turning down the fight were also shot down, this time with the boxer and those closest to him opting to set the record straight.

“It’s not Ryan’s fault that he didn’t fight Duno. In fact, he was the one saying to make the fight happen,” Guadalupe Valencia, Garcia’s lawyer and adviser insisted during an impromptu press conference and conference call held prior to Saturday’s show. “He told everyone this is all a lie and that he wanted to knock him out.”

Garcia’s ultimate withdrawal from the show left the event without a notable gate attraction. Unbeaten 154-pound titlist Jaime Munguia headlined the show, scoring a 4th round knockout of Ghana’s Patrick Allotey in what will likely be his final fight at that weight. The Tijuana, Mexico native has served as a popular attraction to home viewers, previously on HBO and currently on DAZN which streamed Saturday’s card.

However, it pales in comparison to the rising popularity of Garcia, who enjoys a massive social media following and has become a reliable ticket seller in his Southern California home region.

Still, more so than bigger paydays, the rising star sought the weekend to prove he’s far more than a big name and pretty face. A fight with fringe contender Petr Petrov—who was willing to take the assignment on a day’s notice—wasn’t going to get him there.

Garcia’s name had previously been mentioned as a candidate to land on the Nov. 2 show in Las Vegas, headlined by Alvarez’s two-division weight jump to challenge light heavyweight titlist Sergey Kovalev. The idea was to land a Duno clash on that card, which would now come more than eight months following his last bout by the proposed fight night.

It’s a fight that can still happen, but also one that could’ve taken place on Saturday had there been proper communication between boxer and promoter.

“I knew the only way to get (respect) after reading those statements online is if I were to fight Duno,” believes Garcia. “But I’m also not going to be taken advantage of and set up in a way where I’m cornered and I have to do whatever they say and that I have to fight Duno for that amount like they always do. They made us get as close as it can so they could make a change (*snaps fingers*) like that, like I have no choice.

“So I said to myself, this is my chance to stand my ground and get my respect, no matter what.”

On-site reporters have revealed that Garcia and his team are due to meet with Golden Boy on Monday, in hopes to rectify this ongoing development.

Ryan needs to stfu, and keep on fighting. Money, power and respect will follow. Right now he still a prospect.

[QUOTE=SteveAnitaSmith;20062568]I understand and you could look at my posts in the past I’m no oscar fan but it’s seems they’re fed up with Ryan, and maybe know something we don’t and possibly cash out on him. I wouldn’t be surprised…

KIngRy need to duck Duno as much as he Can. Duno's Dangerous, and he knows it. GB need to feed him more Patsies for a $50 K pay,Or just let him go. but they wont! Just Business!

[QUOTE=Verus;20061515]Whether Ryan is a good boxer or whether or not he has a big ego is not the point, GB publically called him a liar and denigrated him. The fact that GB has admitted that what they posted is not…

Damn you and your truths! 😂🤘[QUOTE=Vodkaholic;20061475]Of course hes acting like a diva. It all started when he hooked up with canelos team[/QUOTE]