Ryan Garcia: Others at 135 Talk A Lot, Not Fighting Opponents Like Campbell

The WBC's 58th  annual convention was held virtually this week because of the on going COVID-19 pandemic.  Several fighters were made available to the media via virtual Q&A sessions including rising lightweight star Ryan Garcia, who was joined by Golden Boy matchmaker Robert Garcia.

It was announced earlier today that an agreement had been reached for Garcia to face Luke Campbell for the interim WBC lightweight title.  With the announcement, the purse bid that had been ordered by the sanctioning body was called off. 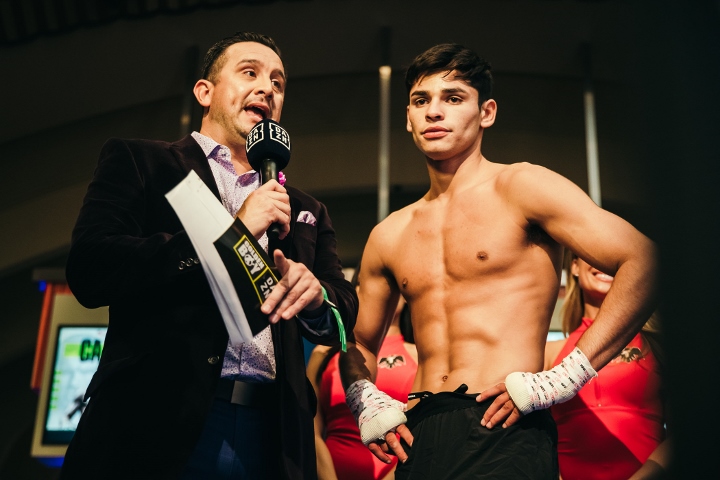 Diaz said that he believes that this is the perfect time for Garcia to face a fighter the caliber of Campbell.

"There is no doubt in my mind of Ryan's potential. Now is the time. His body has filled in now. He is hungry and he is wanting and wanting for the right reasons. He wants to show the world that he is the best and we have talked about this, no matter who he beats, no matter what happens, there still is going to be part of the world criticizing and this and that but that is just part of life and part of boxing and it just means you are at the top," said Diaz.

Garcia is very confident that he will not only win the fight but win the fight going away.  Campbell, a 2012 Olympic gold medalist, lost a split decision to former three-division champion Jorge Linares and also gave top 3 pound-for-pound star Vasilily Lomachenko a tough fight last year.

"This should show people that I am not all talk. I want the good guys at lightweight. All of these other fighters are talking a lot but I see who they are fighting and they are not fighting anybody like I am going to do against Luke Campbell. Look at the facts, I am going to fight Luke Campbell and I want to show the people that I will beat him and relatively easy," Garcia stated.

He was frightened of Linares so at least he’s fighting a guy with a pulse. I still pick Campbell to outbox him and get robbed.

[QUOTE=BoxingIsGreat;20715509]Leo is a champion at 130. Fact. Fight is at 130. Fact. Davis is moving down one division. Fact. Advantage Leo, the four division world champion. One more fact. Campbell hasn't done crap. He always came short in his big…

[QUOTE=Doubledagger;20715475]Leo Santa Cruz is better than Campbell. Has done way more in the sport of boxing. Tank is fighting a much more solid opponent.[/QUOTE] campbell has beaten top 10 fighters at 135. santa cruz has not at 130 nor 135.…

[QUOTE=Lonelystoner;20715729]Tank literally had 1 fight at 135 and he's moving back down to 130 to fight a champion. stop blowing this out of proportion[/QUOTE] look at the 2 opponents santa cruz fought at 130...he has beaten no on there. totally…