Ryan Garcia Answered A lot of Questions in Campbell Fight

This past Saturday, the unbeaten lightweight claimed an interim world title belt by overcoming a knockdown to knock out two-time world title challenger Luke Campbell in round 8 at the American Airlines Center in Dallas, Texas.

Rather than celebrate a solid win, the 22-year-old is hearing more criticism than praise.

Garcia answered a lot of questions with his knockout win Saturday night.

Number one, he was able to overcome adversity. Garcia was able to recover from the knockdown in round 2, which he admitted he was hurt, and was able to gather himself to fight on. Not many prospects or unbeaten fighters would have been able to do what Garcia did. 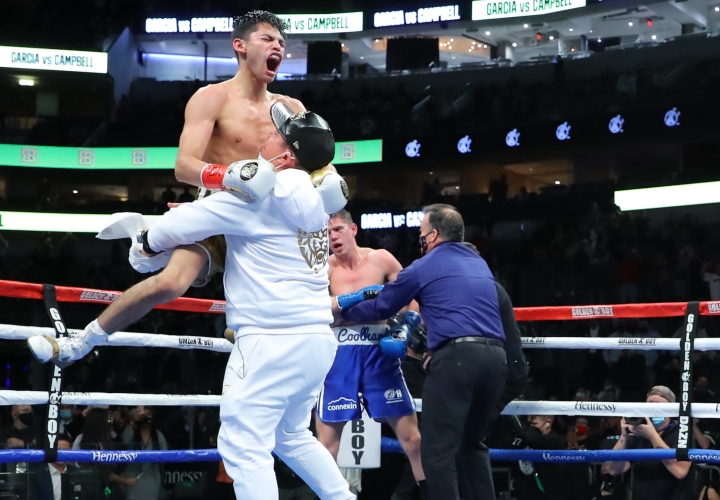 Number two, Garcia maintained his composure, following through on the instructions of trainer Eddy Reynoso. There may or may not be a language barrier between Reynoso, who primarily speaks Spanish, and Garcia, who primarily speaks English, but both were on the same page and in sync in the corner at the conclusion of each round.

So again, why the criticism or ‘hate’ on what Garcia’s performance against Campbell? Does this go beyond the ring?

Garcia may be a 22-year-old social media star, with about 506,000 followers on Twitter, and 8.2 million followers on Instagram, but he is proving to be a solid contender in the ring. His two years with Reynoso have showed an improved skill-set and ring generalship, despite some lapses in defense and not tucking in his chin.

Is Garcia ready for the likes of Gervonta ‘Tank’ Davis, who he called out in the post-fight press conference? That is a huge step-up in opposition, one that would have to wait as promotional and network issues will prevent that fight from happening this year or in 2022. Garcia is promoted by Golden Boy, which streams their cards on DAZN and Davis is promoted by Mayweather Promotions, which has had cards aired mostly on Showtime.

Not to mention the animosity between Oscar De La Hoya, Garcia’s promoter, and Al Haymon, Davis’ advisor, may make any and all negotiations awkward or not even take place at all.

WBC president Mauricio Sulaiman has stated the plan is to have Garcia challenge WBC lightweight titleholder Devin Haney, since the winner of the Garcia-Campbell fight became Haney’s mandatory.

Haney also has to deal with another mandatory in Javier Fortuna, per the WBC rules.

Why not build a potential Haney-Garcia fight for later this year by having a card with Haney facing Fortuna, fulfilling that mandatory, and Garcia facing someone the likes of Jorge Linares. Both Garcia and Linares were penciled to fight this past July in Los Angeles, but those plans went awry due to the COVID-19 pandemic.

What would a win over Linares do for Garcia? Well, for those critics who believe the win over Campbell was no good enough, a victory over Linares would be more of a statement.

But that is the thing with critics of Garcia? What would satisfy them? Wins over Haney, Davis, and Teofimo Lopez, who has the other world title belts. Is that would it would take?

Or for Garcia to lose? That could happen. Garcia does have defensive flaws, especially with an aggressive style. But, look who suffered a loss and was able to bounce back to become the recognized best fighter in boxing today? Stablemate and friend Canelo Alvarez. You think a loss will deter Garcia from winning a world title or two at 135 pounds or even at 140?

Garcia has mentioned he does not want to stay long in boxing. In April of last year, Garcia stated he wanted to fight for another five years. So basically, he would be done prizefighting before reaching age 30.

Garcia has proven to take the sport seriously and not to be a hype job. Reynoso is a no-nonsense trainer who has had to lay down the law, so to speak, with Garcia and set high expectations in the gym.

Garcia is 22. Maybe he has hit his ceiling. Maybe not. He is in good hands with Reynoso, Canelo Alvarez, and promoter Oscar De La Hoya to guide his career. He has been matched appropriately for a fighter at this stage of his career.

If you are still not convinced Garcia is a contender, or even a good fighter, that is fine. Garcia seems to ignore or feed off the criticism. He is going to continue being who he is, inside and outside the ring.

Maybe you will grow to eventually give him his due.

Linares? He's been KOd more times than Khan. Exactly who has he beat to earn this confidence? Mitchell, Crolla, and Campbell? He eats more Brit lunch than Canelo.

[QUOTE=VashDBasher;21001626]Would love to see Garcia fight against Linares. That’s an intriguing matchup and I believe that Garcia will make a statement.[/QUOTE] I believe Ryan will fight Linares next then possibly a Nakatani if his eye is healed. I feel like…

Would love to see Garcia fight against Linares. That’s an intriguing matchup and I believe that Garcia will make a statement.

Garcia beats linares. Linares is slowing down, although he might be more up for a fight like this than his most recent ones. Still, i would believe he would have too much handspeed and power for this version of linares