Ruslan Provodnikov Given The Star Treatment At Showtime

One way or another, Ruslan Provodnikov was going to fight this weekend.

There was a point when the free-swinging brawler from Russia was going to return to HBO’s airwaves, once again assuming the role of B-side attraction paired up against an athlete the network was grooming as the next “it” boxer.

On this particular occasion, his services were to be acquired versus unbeaten reigning super lightweight titlist Terence ‘Bud’ Crawford. In fact, the point was far enough along in negotiations to where Crawford’s team – including the staff at Top Rank – were stunned to learn that Provodnikov was instead walking across the street to fight on the same date.

Rather than having to attempt to play the spoiler role, he has been given the star treatment. Provodnikov is billed as the A-side for his upcoming showdown with John Molina Jr., as the two collide this Saturday at Turning Stone Resort & Casino in Verona, New York (Saturday, Showtime, 9:00 p.m. ET/6:00 p.m PT)

“I am very thankful for everyone who has made this fight happen,” Provodnikov (25-4, 18KOs) acknowledges of his Showtime network debut. “I am pleased with the opponent that I have because John Molina is a tough fighter. It’s going to be a tough fight and I am looking for it to be a battle. So everybody be ready because on June 11 it will be a great fight.”

The wheels were in motion for nearly two years to attempt to bring Provodnikov from HBO to Showtime. It was shortly after the time when he came up short in the eyes of two of the three judges versus Chris Algieri, his super lightweight title reign coming to an end after just one fight in June ’14. 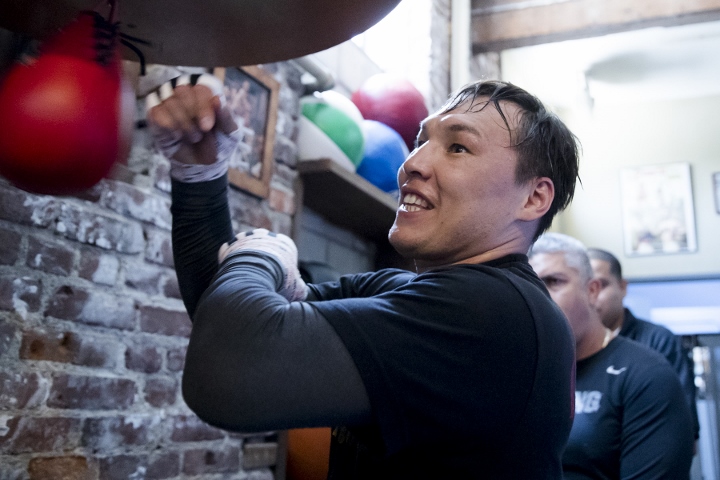 The scoring of the fight certainly had nothing to do with why Provodnikov and his team sought to make a move. After all, the HBO broadcast team – including Hall-of-Fame bound unofficial scorer Harold Lederman - had the then-reigning titlist winning the bout with room to spare. Instead, Algieri came up aces that evening, ironically on the one night in his four network appearances in which Provodnikov was billed as the evening’s leading attraction.

What was of concern was the lack of opportunities made available for the all-action star who has proven to be ratings gold. All four HBO-televised bouts have produced viewership averages of at least 1.046 million. That number came in the fight versus Algieri in what served at the time as the most watched edition of Boxing After Dark, surpassed only by Crawford’s thrilling 9th round knockout of Yuriorkis Gamboa one week later.

The two boxers were not on each other’s radar at the time. Crawford was just two fights into his lightweight title reign, having only just begun to ponder a move to the 140-pound division. Provodnikov was very much a super lightweight, in fact flirting with the idea of moving up to welterweight, where more attractive – and lucrative – options awaited.

He instead elected to remain at 140, where he was offered the opportunity to dance with another boxing cult favorite in Lucas Matthysse.

The timing of the bout – April ’15 – was perfect, coming six days before Matthysse was to be formally honored by the Boxing Writers Association of America for his role in the 2014 Fight of the Year in a knockout win over Molina. The hard-hitting Argentine was twice dropped before raging back to win by 11th round knockout in a bout that was part of a seven-fight stretch on Showtime.

It was where Provodnikov and his team hoped for their April ’15 clash to land, as the sense was that there would be a greater appreciation for his services.

“I opened the dialogue with Showtime’s Stephen Espinoza for the fighters that we promote,” Banner Promotions’ head honcho Artie Pelullo explained of the process that led to Provodnikov and several other Banner fighters to come to Showtime. “One thing led to another. We felt there were more opportunities over there. It all started when Stephen put in a bid for Showtime to air the matchup with Ruslan Provodnikov and Lucas Matthysse.

“Unfortunately – well, I don’t know if I want to say that, but unfortunately in the sense that we were hoping to work with Showtime – HBO had the right to match the offer, which they did. So we returned to that other network for our last fight, with their matching the bid making us a televised free agent. Stephen Espinoza didn’t hesitate to keep in touch with us, hoping to do future business together.”

That day was to arrive last fall, with Showtime angling for Provodnikov to face Amir Khan in a pairing of former super lightweight titlists. Khan declined, and Showtime’s efforts to bring coverage of Provodnikov’s eventual appearance in Russia – a 4th round knockout of previously unbeaten Jesus Rodriguez – ultimately proved futile.

Still, discussion remained active between the network and Banner Promotions, bringing not just Provodnikov but eventually all of the promotional outlet’s athletes to its airwaves.

Included in the mass move was unbeaten super welterweight Demetrius Andrade, who faces Willie Nelson in the evening’s chief support. The matchup was mentioned in the same capacity as Showtime’s recent 154-pound title fight tripleheader, with the combination of all four fights featuring the division’s top six athletes.

In Provodnikov’s case, there remains an abundance of talent at super lightweight and welterweight, big fights to be made providing he emerges victorious this weekend.

Remaining in the win column has been his one struggle, as he is 3-3 in his last six starts. The losses have come versus Timothy Bradley Jr. – in a fight universally recognized as 2013 Fight of the Year – Algieri and Matthysse. Still, it’s not the outcome of his bouts but what takes place from bell to bell that long ago caught the attention of the Showtime brass.

“One thing that has characterized Ruslan is that he's a fan favorite,” explains Espinoza. “What we look for is entertaining programming. That is what Ruslan has consistently delivered throughout his career. It really doesn't matter whether he wins or loses; (his bouts) are entertaining and enjoyable to watch.”

Of course, it will matter at least just a little bit whether or not he wins. A victory on Saturday will lead to the type of fights Provodnikov has long craved. That opportunity could have come versus Crawford, but the question arose of what was next with a win.

It is no longer a concern given the talent that has regularly appeared on this side of the street through the years.

“There’s (unbeaten welterweight titlist) Danny Garcia, (former 140-pound champ) Lamont Peterson, Adrien Broner, the winner of (the June 25 CBS primetime main event between) Keith Thurman and Shaw Porter,” Pelullo rattled off of just a few of the lucrative options that await Provodnikov. “There is more of an opportunity for Ruslan to show skills.

“It's better for his career. We're lining up a lot of big fights for him in the future… but this is the fight he has to get by. Provided that he wins, there's a real opportunity at 140 and 147.”

For this weekend, Provodnikov gets to know the feeling of a show in his honor. He enters a major promotion as the betting favorite and the lead attraction, with Showtime rolling out the proverbial red carpet and pulling out all the stops to make him feel like a superstar.

All he has to do is deliver in the ring.

“I will try to not disappoint anyone and try to bring my best on June 11,” Provodnikov noted, though stopping well short of guaranteeing the manner in which Molina leaves the ring. “I don’t like to make any predictions. Boxing is very unpredictable; anything can happen on June 11. We’ve got a little bit to wait until fight night and for me it’s just important to win the fight.”

This deal was really just to get Demetrius Andrade. Ruslan and others like Willie Monroe is just extra

If all goes right we could get Provo vs Broner in the fall...Molina seems like he's washed up but he may put up an entertaining scrap at least... Provo makes for a good fight vs anyone because of his heart…

[QUOTE=Snoop Frog;16772779]Glad he's getting a good deal out of this. He's earned it.[/QUOTE] I have to agree, he's an all-action boxer who has definitely put in his dues. Can still remember watching him on FNF a few years ago.

[QUOTE=_Maxi;16775053]Provo won 5 of last 6 rounds. One judge had it a draw. It was similar to Garcia vs Peterson. The first six rounds were brutal but Ruslan is a train.[/QUOTE] Yes, but a train with less brains now.