Even with such language specified in the contract for their first fight, Andy Ruiz and his team were surprised when Anthony Joshua insisted on running it back.

The fallen British heavyweight was on the wrong end of one of the biggest upsets in heavyweight title fight history, suffering four knockdowns en route to a 7th round stoppage for his first career defeat. That memorable night at New York City’s Madison Square Garden saw California’s Ruiz (33-1, 22KOs) become the first-ever Mexican boxer to lay claim to the heavyweight throne, a moment which was immediately followed by England’s Joshua (22-1, 21KOs) exercising a rematch clause.

“I was actually surprised he took the fight this soon,” Manny Robles, Ruiz’s head trainer admitted during a recent media conference call to discuss the rematch, which will be held at Diriyah Arena in Diriyah, Saudi Arabia (Saturday, DAZN, 3:45pm ET main event start time). “Some people might have taken a year off or would have waited. They would have taken a fight or two before going into a fight like this.” 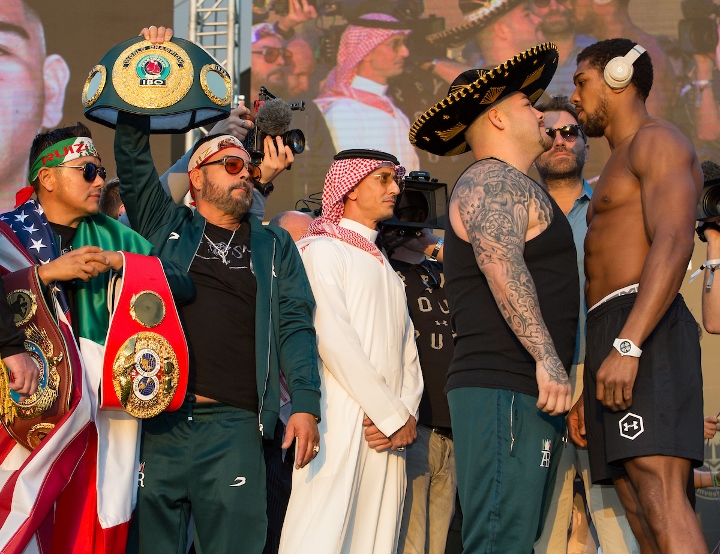 Waiting that long or taking a tune-up was never of any interest to Joshua, a 2012 Olympic Gold Medalist for Great Britain who claimed his first heavyweight belt in just his 16th pro fight. He’s collected three more along the way before disaster struck in New York, when Ruiz climbed off the deck to repeatedly floor Joshua before forcing the history-making stoppage.

Both sides have made significant adjustments since then, with Joshua visibly trimmer this time around. Ruiz and his team never doubted that in front of them will come a more motivated foe, which they naturally factored into their own preparation for Saturday’s title fight.

“You always prepare to win. You hope for the best but prepare for the worst. Of course, you never tell your fighter that,” notes Robles. “There’s no doubt in my mind that Andy Ruiz will win on Saturday night.  But then you also have to understand that we have a monster in front of us in Anthony Joshua who wants to recuperate what he once had. It’s going to be a huge challenge and going to be a lot of fun.”

Joshua was a massive favorite to win the first fight, and still pegged by most experts to prevail in part two but with the odds much closer for this entry. Those who back Ruiz this time around get the sense that if he could do it once, he could do it again—not to mention that few athletes are able to fully put behind them the disastrous night that Joshua endured in his stateside debut earlier this year.

“You get dropped four times and get stopped, where are you mentally?”

Surprised you he did!