Ruben Villa Looks To Bring A World Title Back To Salinas

One of Ruben Villa IV’s favorite things to do is finishing his afternoon road work by running up a hill in Riverside, California that overlooks the entire city. Up there, he can breathe, relax and bask in the beauty of his surroundings.

As he prepares for the biggest fight of his life, a 126-pound world title opportunity against Emanuel Navarette on October 9, his daily running routes have looked a little different. Due to COVID-19, training camp is now at home in Salinas rather than at the Garcia Boxing Academy in Riverside. And due to poor air quality caused by wildfires, Villa has split time between running indoors and running outdoors with a mask for good chunks of his camp.

But it’s precisely that new running route, and the sights he sees on it that are driving him in his quest for his first world title.

“The fires have been a motivation. COVID not so much, me and my family are super close, so we don't really go out much. I feel like I've been in quarantine before quarantine started. It's the fires,” said Villa. “We've got a lot of field workers that are still working during COVID, during the bad air quality, just seeing them while I run and with masks on, and any time of the day or night they're working, I feel like that's helped motivate me and push myself.”

Salinas Valley is one of the North America’s most vital farming hubs, and home to one of the United Farm Workers’ union offices. It brands itself the “salad bowl of the world,” famous for its lettuce, celery and cauliflower in particular. Some cities in the valley, such as Gonzales, CA, are comprised of 70 per cent agricultural workers, many of whom are undocumented. With no other options, workers have had to decide between being fired or endured unimaginable conditions due to both COVID and fires.

Villa’s father, Ruben III, who coaches him alongside trainer Max Garcia, worked in agriculture too. When Villa was young, he would help his father in the fields and the shipping yards. In the early days of Villa’s pro career, his father would remind him of the long days in the field in the 90-degree heat if Villa was struggling or wasn’t working hard enough. It was proof that Villa could get through this too.

The city that Villa is so proud to represent has received plenty of national attention of late, due to the circumstances of its workers and because of a viral photo of elementary school children huddled around a Salinas Taco Bell to use its free Wi-Fi. 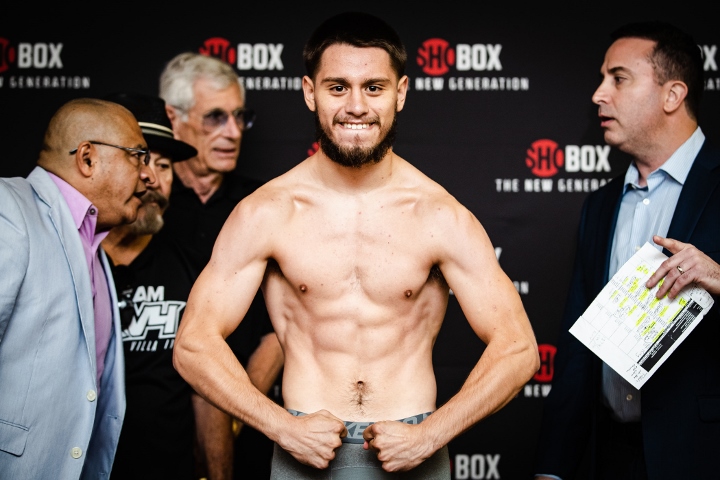 Outside of the ring, Villa is something of a serial charity worker, working tirelessly to alter his city’s reputation and help a community in need. Aside from the Team Villa reprieve being a free home for youth who want to train, Villa also quietly spends his time delivering lunches to the homeless, speaking at juvenile detention centers, and particularly, donating to women’s shelters.

“After this fight, I want to get back into doing my community service and just doing more for what's going on. There's so much that can be helped right now in my city, and I want to be involved,” said Villa. “My parents always told me to give back and never forget where I came from. Since I was young I can remember them telling me that. That's something that I've learned to enjoy. It feels good to give back without expecting to receive.”

For the time being, his connection to the city comes through his daily runs and once-a-week brief visits with his family and girlfriend. He and his team have moved into an Airbnb rental, and since the day the fight was announced, August 1, Villa has been off social media entirely. Outside of what he sees with his own eyes as he runs through his city, the only way he hears about world news at the moment is if his friends bring it up in conversation while they play Call of Duty.

Winning a world title would be monumental for Salinas, especially coming from a man described in a 2019 story by Dennis Taylor in Voices of Monterrey Bay as being like a “Marvel superhero” to children in the community.

“I've dreamt about it, but it hasn't happened, and I'm not going to settle for less until it's real,” said Villa.

As much as the situation may not feel real for Villa, it’s equally unexpected for many in the boxing audience as well. Until this fight was signed, many people, perhaps unfairly, regarded him as a prospect rather than a contender. In fact, his most recent bout, a ten-round wipeout of Alexei Collado, was aired on ShoBox, Showtime’s series explicitly designed to highlight prospects. But after that win, he found himself ranked No. 2 by a sanctioning body and in a position to fight for a world title.

When a bout between Navarrete and Jessie Magdaleno fell through, Villa was next in line and jumped at the opportunity, given that he was already in the gym helping Ruben Cervera (a man he beat back in 2019) prepare for a September 5 date on ESPN.

As a Top Rank fighter, Navarrete is the A-side on the program his promoter is putting on and will likely be viewed as the favorite. However, the former super bantamweight champion is moving up to 126 pounds where Villa comfortably resides.

Villa also feels that Navarette’s aggressive, volume-punching style is the perfect outlet for his quick feet and slick boxing style.

“Him being as aggressive as he is, it's probably his strong suit, but fighting against me, it's going to be one of his weaknesses. I feel like he's the one who's going to have to make more adjustments. My last four, five fights, they've been big, strong aggressive fighters, and weren't able to adjust, and I've been able to win all ten rounds and blow them out,” said Villa. “I think that as long as I'm confident and stick to my game plan, do everything I'm good at, I'll be able to beat this guy.”

As an amateur, Villa twice captured the National Golden Gloves title, and holds wins over names like Devin Haney and Shakur Stevenson. Stevenson ultimately beat Villa in the Olympic Trials, went on to medal at the Games, and has gone on to brighter lights, just as Haney has. Villa, meanwhile, has stayed in the valley, and taken a road with far less lighting to try to get to where his amateur peers are at already.

One day, someday soon, Villa hopes to be at the top of the hill again.

“The work has to be done. I'm not going to break, and he's not going to want it more than I want it,” said Villa.

[QUOTE=sammybee;20783391]Villa will outbox Navarette.[/QUOTE] No way Navarette will run right through him. Mark my words.