Then Torres took over against the aggressive, rugged veteran.

The 22-year-old lightweight prospect brutalized Bravo in the fifth and sixth rounds before referee Ray Corona decided he had seen enough in the sixth round of their scheduled eight-rounder. Corona stopped the fight at 1:43 of the sixth round, with Bravo still standing. 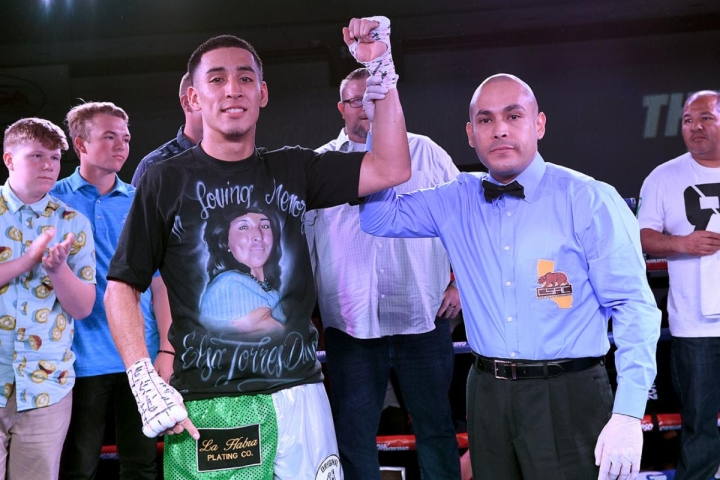 Torres withstood the rugged Bravo’s strong challenge for four rounds before he began battering Bravo to his head and body. Bravo bravely took Torres’ hardest shots, but Corona stepped in to halt the action after Torres blasted Bravo viciously with a right to the body, left to the body and a right to his head.

Torres tore into Bravo’s body early in the sixth round, which was the beginning of the end of their fight.

Torres blasted Bravo with two right uppercuts barely more than a minute into the fifth round. Bravo temporarily held Torres after absorbing those shots.

Torres continued to land while moving backward in the fourth round. Torres knocked Bravo off balance with a left hook that landed with 35 seconds to go in the fourth.

Bravo hit Torres with a lunging left hook and then a right hand as Torres attempted to back away from him late in the third round.

A relentless Bravo landed multiple left hooks in the second round, when Torres had difficulty keeping Bravo off of him.

Bravo stayed on top of the taller, longer Torres throughout the first round. Torres worked well off his jab and connected with a several straight right hands as Bravo bulled his way forward.

Rubes Torres pass this test very well for a persistence opponent that took his moments. :boxing: