Roy Jones: No Retirement, I'll Be in The Coffin Throwing Punches!

Former four division world champion Roy Jones Jr. (65-9, 47 KOs) is not planning to retire from boxing in the near future.

He was ringside on Saturday night at Madison Square Garden in New York City, and watched Puerto Rican superstar Miguel Cotto enter the ring for the final time as a professional fighter.

Cotto, 37 years old, suffered an upset loss by way of a twelve round unanimous decision at the hands of Sadam Ali. 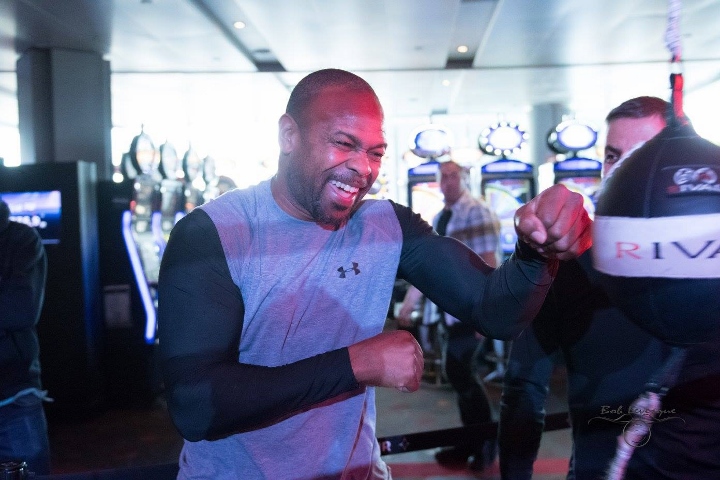 The entire event was a big farewell for Cotto - and after the fight the boxer received a video package that focused on the key points of his career.

Jones, 48 years old, has no interested in a farewell event, farewell videos or anything similar to that. He wants to continue fighting to the very end.

Jones won his last three fight since getting knocked out cold by Enzo Maccarinelli in December 2015 in Russia.

Jones came right back to the ring in March 2016, and then won again in August, and last fought in February with a TKO victory over overmatched Bobby Gunn in a cruiserweight fight.

At the moment, Oscar De La Hoya has mentioned the idea of coming out of retirement for a fight with UFC superstar Conor McGregor. De La Hoya, 44 years old, has been retired since a TKO defeat at the hands of Manny Pacquiao in the fall of 2008

Jones sees nothing wrong with a De La Hoya return.

[QUOTE=D4thincarnation;18284696]He'll be in the coffin sooner than he thinks if he keeps on fighting.[/QUOTE] Lol I was gonna say exactly this. :lol1: Roy needs to give it up. Nothing to prove and everything to lose.

[QUOTE=WesternChamp;18287797]yeah, but he's not fighting your "average man".. he's in there fighting professional boxers.[/QUOTE] Thats true. He's been put to sleep with some vicious KO's. You just cant keep this man out of the boxing ring though.

roy jones riding this mutha, the wheels fell off, the rims are sparking...