Roy Jones: Mayweather and Trump - The Two Smartest in America

Ironically, as Jones was making that statement in Las Vegas - Mayweather was actually meeting with Trump in New York City.

Mayweather, who retired from boxing in September of 2015, was in Brooklyn to promote a Showtime televised doubleheader - which takes place on January 14th at the Barclays Center. In the main event, Mayweather Promotions' WBC super middleweight champion Badou Jack will unify his belt with IBF champion James DeGale. In the televised co-feature, another fighter promoted by Mayweather - Gervonta Davis - will challenge IBF super featherweight champion Jose Pedraza. 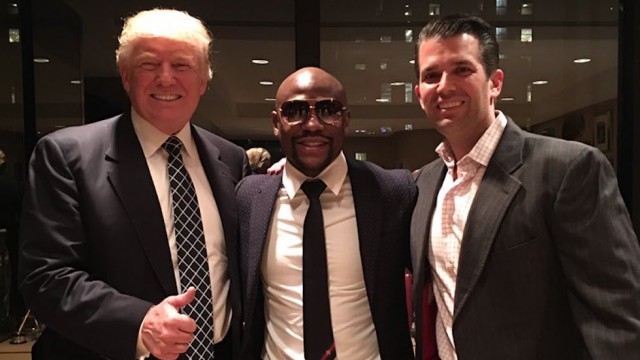 Jones was very impressed with the some of Trump's tactics, which were used to pull off a major upset last week when he beat Hillary Clinton in the Presidential election. He was equally impressed with Mayweather's mental tactics, which the retired boxer used to make last May's fight with Manny Pacquiao the most financially lucrative boxing event in history.

"They weren't pertaining to Roy's thoughts or someone else's thoughts. They went the whole viewing public as a whole. They took it for a ride and won the rides. They may be the smartest two people in the country right now."

There some truth to Roy's words. Most people are too dumb to look deeper into what Floyd & Trump did to see their success.

[QUOTE=Kigali;17204139]Trump is constantly filing bankruptcy...and is nowhere near a Billionaire...hence his reluctance to submit his tax returns.[/QUOTE]bankruptcies or not and whether we're separating millions from billions that mf trump has more $$$ than anybody i know,am related to or hangout…

Only someone from the ghetto could say something like that.

i wonder what shltty cents has to say about mays meetings with men of power.....

[QUOTE=mathed;17204584]LOL, no kidding....that would be sweet.[/QUOTE] I can't wait till a strong breeze blows that dead weasel off tiny hands Trump's head.:lol1: You know it's coming. He's crossing his tiny fingers already...PRAYING the wind is low when he is sworn…