Roy Jones: I Wasn't Like Mayweather, I Went And Got Every Belt Possible

A memorable rail against the sanctioning bodies by one all-time great seems to have drawn the ire of another.

Roy Jones Jr. is not among those who were left in awe by the choice words recently offered by Floyd Mayweather Jr. in relation to the number of alphabet titles which exist in the sport today. Mayweather took a hard stance against boxing’s version of participation trophies as part of an impromptu rant during a recent media workout for Gervonta Davis (23-0, 22KOs), ionically whose three-time title status includes having won a vacant 130-pound title and a vacant secondary version of a 135-pound strap.

The subject came up during the official press conference for Jones’ upcoming exhibition with former World heavyweight champion Mike Tyson. Something called the WBC Frontline Battle Belt will be at stake for the scheduled event, which will be contested in eight two-minute rounds on November 28 live on Triller Pay-Per-View from Staples Center in Los Angeles, California. 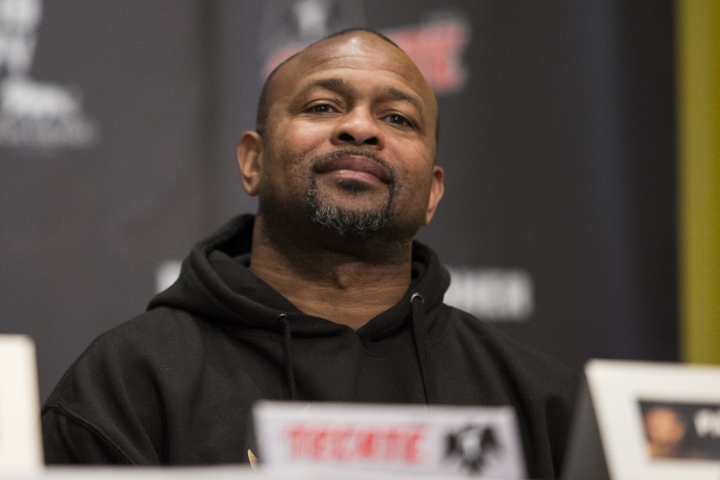 A question was posed by veteran boxing scribe Kelsey McCarson as to why two legends would need such a trinket, referencing Mayweather’s aforementioned speech. Neither participant seemed to care for the stance, particularly Jones who likes the idea of something being at stake for the forthcoming event.

“First of all, I don’t give a damn what nobody say. I don’t give a damn what they got to say,” exclaimed Jones (66-9, 47KOs), an eight-time titlist spanning four weight divisions. “They ain’t got nothing to do with me. I do what I do, my business is my business. I don’t care what he or nobody else got to say. It ain’t got nothing to do with what he doing. So, he can stay in his lane and do what he do, let me do what I do.

“Secondly, when I was fighting, I wasn’t like him. I went and got every belt possible that I could get in my weight class(es) at the time. Mike went and did the same thing. We come from the old school. It wasn’t we’ll take this one and that one. No, no, no, no. We want every belt you got. I don’t care what kind of belt it is. It can be the Joe Crab Seafood belt. I don’t care what it is. If a guy wore a belt in my weight class, I wanted that.”

Among Jones’ haul in a Hall of Fame-bound career was his serving as the undisputed light heavyweight champion for nearly four years. The now 51-year old boxing legend from Pensacola, also won major titles at middleweight, super middleweight and heavyweight, along with enjoying three separate title reigns at light heavyweight while serving at or near the top of pound-for-pound lists for nearly a decade.

His counterpart was also loaded with hardware during his better years.

Tyson (50-6, 44KOs) became the youngest heavyweight titlist in boxing history following his 2nd round knockout of Trevor Berbick at just 20 years of age in November 1986. Within a span of four fights, Tyson earned the distinction of becoming undisputed heavyweight champion, along with lineal championship status following a June 1988 1st round knockout of Michael Spinks. His reign ended in February 1990, followed by his incarceration in 1992 which ruined plans for a showdown with then champion Evander Holyfield. Post-prison Tyson managed to collect two more major titles in 1996 though getting stripped of one and losing the other in a November 1996 knockout loss to Holyfield in their first fight.

Tyson lost the rematch by disqualification—the infamous “Bite Fight”—and would only fight for the crown once more in his career, coming in an 8th round knockout loss to Lennox Lewis in June 2002. The final three fights of his career came without hardware of any kind at stake.

Jones’ last day as a major titlist came in the moments prior to his May 2004 knockout loss to Antonio Tarver in their light heavyweight championship rematch, having outpointed his fellow Floridian six months prior to regain his 175-pound belts. Jones would officially fight in just one more recognized title fight, suffering a 9th round knockout loss to Glen Johnson in September 2004.

From there came fights with various belts on the line, including a pair of fringe titles in the final two fights of his career. Jones hadn’t fought in any capacity since a 10-round decision over Scott Sigmon in February 2018, which came with the German version of the WBU cruiserweight title at stake in his Pensacola hometown.

To return to the ring after nearly three years of limiting his involvement to the sport to training and promoting, it only made sense to have one more prize on the line.

So, it don’t mean nothing to people like [Mayweather], maybe. But it means the world to me.”

[QUOTE=Boxing Goat;20849960]Boxing technique maybe? lol Look nvm, i can't make you understand the sport. Is Floyd gifted? Certainly. He's fast, has very good reflexes and has even proven to take a punch too. But the things he does are done…

[QUOTE=megas30;20848329]I really don't want to insult the people here, but you remind me why I avoided this part of the forum. Point to something that I have said that is not something a fighter is born with ?[/QUOTE] Boxing technique…

[QUOTE=Boxing Goat;20847835]Ya can't beat a guy that won't fight you[/QUOTE] Yea. I think dude wanted to fight in Germany like he was the real champ when Roy had most of the belts, and all of the spotlight. Sometimes you gotta…

[QUOTE=Boxing Goat;20847823]Once again YDSAB Talent is more or less a gift from God to have an ability to do something, not something learned , then honed and perfected. Which is what Floyd did. Fanboy alert lol[/QUOTE] I really don't want…