Rowan Campbell’s move up to the light heavyweight division was successful Saturday night, stopping Nicholas Radley in the fourth round at Emperors Palace in Kempton Park, South Africa.

With the victory, Campbell improves to 12-0, 8 knockouts.

Campbell, who resides in nearby Johannesburg and is trained by Peter Smith, last fought on Aug. 23, stopping hard-hitting Patrick Mukala in the seventh round. The fight also took place at Emperors Palace, where Campbell has fought all of his bouts as a pro. 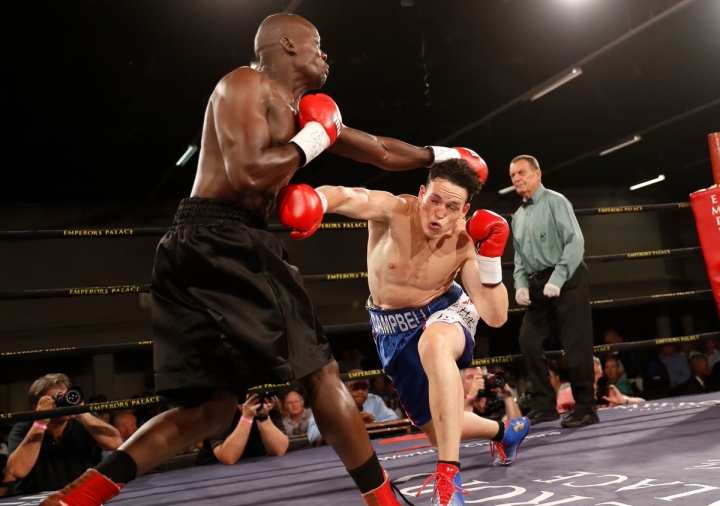 Radley stopped Frank Rodrigues in his last bout on June 16 in his hometown of Cape Town.

Both Campbell and Radley had their moments early on in the fight, exchanging hooks and crosses in the center of the ring. Campbell backed Radley in a corner during the fourth round, hurting him with an overhand right hand to the head. Campbell followed up with a barrage of punches until the referee stepped in and stopped the bout.

No word if Campbell will stay at 175 pounds or move back down to the super middleweight division, where he has fought most of his bouts.

Allen was the busier and more-effective fighter throughout much of the fight. In round 10, Allen hurt Tuter (8-2, 5 KOs) with a right hand to the head. Tuter backed into a corner, where Allen unleashed a barrage of punches, culminating with a vicious left hook to the head that prompted the referee to step in and stop the bout.

In a clash of unbeaten junior bantamweights who reside in South Africa that turned into a war, Ricardo Malajika overcame two knockdowns to stop Mnqobi Mkhize in the eighth round.

Malajika (6-1, 5 KOs) dropped Mkhize in the opening round, but found himself on the canvas in round two. Mkhize, who was cut over his left eye midway through the fight, dropped Malajika during the sixth round. Mkhize looked tired towards the end of the round, and he was deducted a point in round seven for repeatedly spitting out his mouthpiece.

One round later, a barrage of punches from Malajika to the head forced Mkhize (8-0, 7 KOs) to turn away, forcing the referee to step in and save him from receiving further punishment.

Junior bantamweight Leyton Gloss (6-3, 4 KOs) of Johannesburg dropped Arnel Lubisi (3-2, 2 KOs) twice before ending matters in round two. The fight was a rematch of their April of 2017 clash, which Lubisi won by unanimous decision.

In the opening bout of the Golden Gloves Promotions card, lightweight Katiego Khanyisa defeated Shone van Schalkywk (0-3) by unanimous decision. Scores were 40-36, 40-36, and 39-37 for Khanyisa, who was making his pro debut.