Roney Hines Vows To Be Patient For Big Fights, Not Looking To Rush

Not in a literal sense, especially in the middle of the COVID-19 pandemic that put a momentary halt on the 25-year-old’s boxing career, but in the sense that, at this point, the slate is clear, the options are endless, and the future is bright.

It’s just like baseball teams that arrive in Florida and Arizona to get ready for the upcoming season and everyone is 0-0 with the dreams of still playing when the World Series comes around.

That’s what it’s like to be an unbeaten heavyweight with under two years in the pro game, and Hines is enjoying it and taking his time.

“The big fights, I just stay patient for it,” he said. “I don’t want to rush it and then something bad happens. So I just wait on my time.”

He’s got plenty of it. Just 25 years old, Hines is in a weight class known for fighters maturing late physically, and as he puts some pounds on his 6-6, 230-pound frame, it’s clear that when he does hit his prime, he’s got the potential to make some noise in the sport’s glamour division.

That’s a ways away at the moment now, so while boxing fans in the United States wait for a heavyweight to take the reigns from European standouts Tyson Fury and Anthony Joshua, Hines hones his craft in California, far from his home in Cleveland. 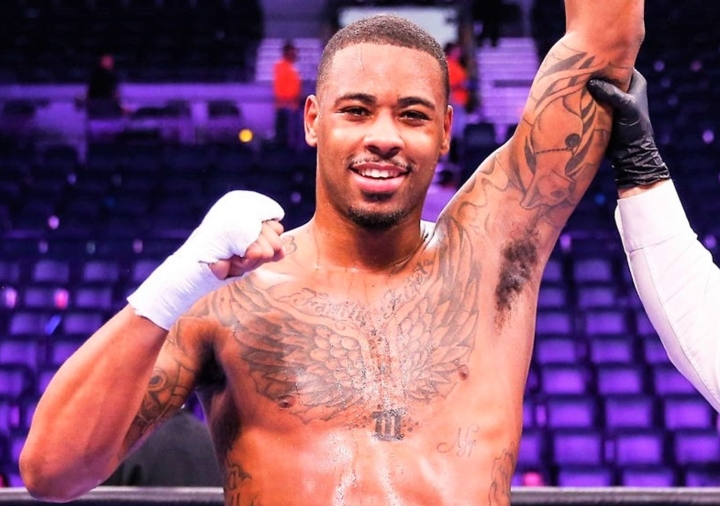 He was even going to get some sparring overseas in the form of unbeaten British rising star Daniel Dubois, but the pandemic put a stop to that. Again, it doesn’t faze Hines, who didn’t exactly foresee this path for himself even just a few years ago. So there is no timetable for moving from his current stage to one where he’s tackling the elite on a regular basis.

“I just take it as it comes because when you put a timetable on it, then if I say it’s six months, and then it doesn’t come, it takes away that urge to even do it because you think it’s never gonna happen,” he said.

That doesn’t mean he’s not ambitious. Quite the opposite, as he told Sky Sports’ Richard Damerell earlier this month, “I see myself as America's champion now. It's just I haven't got the belt yet.”

He could be right. In a year or two. Now, he’s raw, but he’s got the tools, and whether it was blasting out his first five pro opponents in the first round or going the distance in his last three bouts, including a split decision win against 8-1 Johnnie Langston in his most recent appearance in February, he’s learning on the job.

“It’s definitely a big change,” Hines said of his transition from the amateurs to the pros. “In the amateurs it’s more fast-paced and in the pros it’s more slow-paced. And the workouts and the work ethic needed are way different. It’s more of a responsibility now. In the amateurs, you can just get up one day and be like, ‘Oh, I can go train if I want to.’ But now in the pros, I have to go train if I want to fight the top guys in the heavyweight division.”

If it seems like this is a whirlwind ride for Hines, who is now quarantining back home in Ohio, it is, even though he’s been involved in combat sports for much of his life, starting in kempo under the tutelage of his father at the age of five, then moving to boxing at eight.

“I was doing both, transitioning back and forth between martial arts and boxing,” said Hines, who went all-in on boxing at 16, but soon was distracted by the streets in Cleveland. When he returned, he was older – and wiser – and he realized that he had the potential to be a success in the ring if he stayed on the straight and narrow.

A fighter needs that confidence. Everyone else needs to see proof, and in 2018 he gave it when he ran through the National Golden Gloves tournament in 2018, beating fellow pro prospect Sonny Conto in the finals. Now it was real, and for a moment, he thought about sticking around to make a run at the 2020 Olympics.

What it ultimately came down to was the idea of striking while the iron was hot. Roney Hines was hot on the amateur scene after winning the National Golden Gloves and two years is a long time to wait in boxing, especially given the politics involved on the amateur scene.

“That’s another thing,” he said. “You can go in there, dominate and they’ll give it to somebody else. I don’t want to say I was lucky, but I’m happy it went my way.”

And when Hines looked around, he saw what he didn’t want to be.

“In Cleveland, I had so many people who were older who were chasing that Golden Gloves title, and I didn’t want to be one of them,” he said. “If you get a chance, get a shot, you may never get that shot again.”

So he took his, turning pro in July of 2018 with a 68-second knockout of David Becker. Since then, Hines hasn’t looked back.

“It’s like living a dream,” he said of his early pro career. “There are times when you’re just laying in bed at night and wishing, but when you’re actually doing it, it’s like you can’t lose.”