Rolando Romero will attempt his first step toward becoming a lightweight champion August 15.

Showtime announced Wednesday morning that the promising prospect will battle Jackson Marinez on August 15 as part of the network’s tripleheader from Mohegan Sun Arena in Uncasville, Connecticut. The 12-round Romero-Marinez match will be broadcast along with a 12-round main event between WBC super middleweight champ David Benavidez and Alexis Angulo, as well as a 10-round heavyweight fight that’ll pit Otto Wallin against Travis Kauffman.

BoxingScene.com previously reported that the Benavidez-Angulo and Wallin-Kauffman fights are part of the Showtime’s three-bout broadcast August 15. 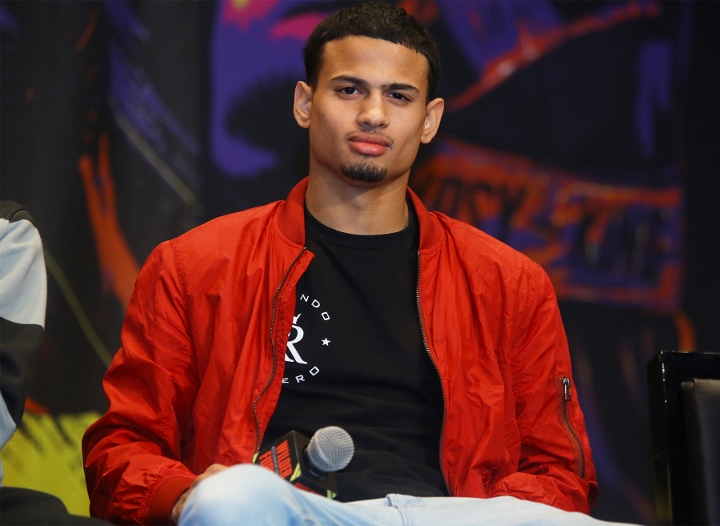 Nevertheless, Las Vegas’ Romero will encounter his best opponent since he turned pro in December 2016. The Dominican Republic’s Marinez, 29, also will take a significant step up in competition when he meets Romero.

Marinez is ranked sixth among the WBA’s lightweight contenders. Romero is rated 10th.

Benavidez (22-0, 19 KOs) and Angulo (26-1, 22 KOs) were supposed to headline a Showtime Championship Boxing card April 18 at Arizona Federal Theatre in Phoenix, but that show was postponed due to the COVID-19 pandemic. The 23-year-old Benavidez won back the WBC 168-pound title in his last fight, a ninth-round knockout of Anthony Dirrell (33-2-1, 24 KOs) on September 28 at Staples Center in Los Angeles.

The WBC previously stripped Benavidez of that belt because he tested positive for cocaine in August 2018.

Sweden’s Wallin will compete as part of this card for the first time since testing WBC champ Tyson Fury last September 14 at T-Mobile Arena in Las Vegas. Wallin lost a 12-round unanimous decision to England’s Fury (30-0-1, 21 KOs), but he opened a huge gash over Fury’s right eye with a punch in the second round and gave the unbeaten Brit a tougher time than many anticipated.

Sweden’s Wallin (20-1, 13 KOs, 1 NC) was supposed to square off against Australia’s Lucas Browne (29-2, 25 KOs) on March 28 at Park MGM’s Park Theater in Las Vegas. The 29-year-old Wallin withdrew from that 10-rounder, which Showtime was scheduled to televise, after a suffering a fractured left foot late in February.

The 34-year-old Kauffman (32-3, 23 KOs, 1 NC) hasn’t boxed since Cuban southpaw Luis Ortiz (31-2, 26 KOs, 2 NC) knocked him out in the 10th round of their scheduled 10-round bout in December 2018 at Staples Center. Kauffman, of Reading, Pennsylvania, underwent shoulder surgery following his loss to Ortiz, which kept Kauffman out of the ring in 2019.

A decent card that I feel is more for a slot in FOX and not a slot in Showtime, nevertheless, still I like the fights. Maybe we get a surprise competitive fight or better, a upset win. :boxing: