A day later, Robert Easter Jr. struggled to beat him. 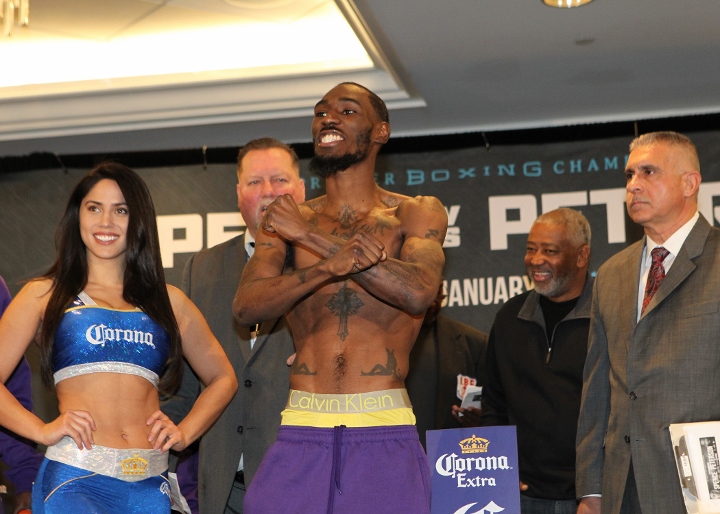 “The public knows what happened here,” Fortuna said through a translator. “They booed because they know that I won this fight.”

Referee Ricky Gonzalez deducted a point from Fortuna for questionable tactics in the second round, which wound up accounting for the difference on Feldman’s scorecard. Otherwise, Feldman would’ve had it even (114-114) and the bout would’ve resulted in a draw.

“It was a tough fight,” Easter said. “He’s a former world champion for a reason. We made it tough trying to counter-punch. He wasn’t throwing much and it made it difficult for me to chase this guy around.”

The decision aside, the shorter southpaw troubled the unusually tall, rangy Easter with his hand speed and movement, and seemed to buzz Easter at least three times. The 5-feet-11 Easter had more difficulty figuring out the 5-feet-6 Fortuna than he did when he encountered a significantly shorter southpaw in his previous fight.

Russia’s Denis Shafikov, who stands 5-feet-5, isn’t as good a boxer as Fortuna, but he, too, troubled Easter at times June 30 in Toledo, Ohio, Easter’s hometown.

Easter still won a unanimous decision, but admitted he made the Shafikov fight harder than necessary. He promised to learn from those mistakes against Fortuna, yet struggled much more against him than Shafikov (38-4-1, 20 KOs).

“I couldn’t get the knockout, but we got the win and that’s all that matters,” Easter said. “I knew he was gonna run once he felt my power. He just wanted to grab and hold the whole fight.”

Easter and Fortuna started trading just before the two-minute mark of the 12th round, in which Fortuna landed the cleaner, more effective shots. Fortuna gained some momentum in the 11th round by catching Easter with a left hook off the ropes.

Fortuna and Easter traded early in the 10th round and Fortuna seemed to get the better of their exchange thanks to a left hook that caught Easter. Fortuna also had success hitting Easter inside later in the 10th round, when Easter came forward with his hands down.

Easter spent the eighth round pursuing a backtracking Fortuna, who seemed reluctant to trade even though he had buzzed Easter twice by that point.

Easter followed Fortuna around the ring for much of the seventh round and urged him to engage by waving Fortuna forward several times.

Fortuna buzzed Easter with a left hook right after eating a right hand late in the sixth round. That shot made Easter retreat, but there wasn’t enough time left in the round for Fortuna to capitalize.

Easter had some success hitting Fortuna to the body early in the fourth round. Fortuna felt those shots, began moving away from him and mostly took that round off.

Fortuna affected Easter with a left hand when there was under one minute to go in the third round. Fortuna followed up, but Easter eventually held to keep him from punching temporarily.

Easter and Fortuna spent the first round feeling each other out, but Fortuna was very aggressive to start the second round.

He drew a warning from referee Ricky Gonzalez for rough tactics, though, and had a point deducted later in the second for shoving Easter into the ropes and hitting him behind his head. Nevertheless, Fortuna’s hand speed troubled Easter throughout the round, when Easter often paid for coming forward with his left hand down.

Easter was supposed to make his third defense of the IBF lightweight title against Fortuna, but Fortuna failed to make weight Friday.

Fortuna weighed 136½ pounds, 1½ pounds over the lightweight limit on his first attempt. When he came back to the New York State Athletic Commission’s scale nearly two hours later, Fortuna had lost only four ounces.

That’s when Easter-Fortuna was downgraded to a non-title fight. Fortuna has won world titles at featherweight and super featherweight, but wasn’t a full-fledged lightweight before facing Easter.

Easter needs to get rid of his Father as his trainer. That’s the main issue. As a matter of fact...he needs a new team. His endurance is horrible also... Get a new team or get KNOCKED the **** out... I’m…

[QUOTE=TainoGodCanelo;18427404]Easy work for Mikey, carnal. Hope he takes the fight just so he can give that punk a boxing lesson[/QUOTE] En serio! It's annoying hearing that loud mouth terron run his mouth when in reality he isn't that good. Mikey…

[QUOTE=BigStomps;18423618]That's what I'm talking about homie! Mikey destroys this fvcking terron Easter![/QUOTE] Easy work for Mikey, carnal. Hope he takes the fight just so he can give that punk a boxing lesson

Easter didn't impress. He has limited pop which fades and he doesn't fight tall. His champ days are numbered.