Robert Easter on Moving To 140: I Feel Like A New Fighter

Robert Easter Jr. is sympathetic to boxing fans who never again wish to recall his forgettable 12-round draw versus Rances Barthelemy earlier this year.

In fact, he’s right there with the rest of the crowd.

“I don’t believe in reliving the past,” Easter Jr. (21-1-1, 14KOs) joked with BoxingScene.com about the fight. “We learn from every fight. I have plenty of wins we can talk about, too.

“But it was just one of those fights where our styles—two counter punchers—just didn’t match up.” 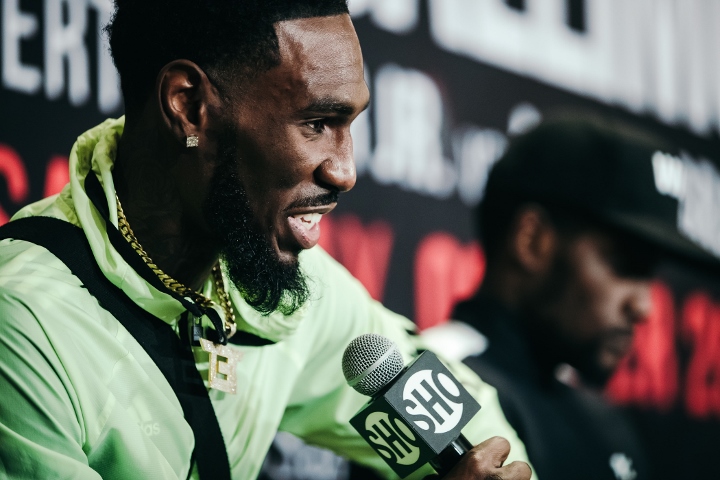 One learning lesson that came from the evening was that it was time to leave the lightweight division—along with the fight itself—in the rearview mirror. The 5’11” former lightweight titlist from Toledo, Ohio will make his debut as he faces veteran contender Adrian Granados. Their bout takes place this at Santander Arena in Reading, Pennsylvania (Showtime, Saturday 10:00pm ET/7:00pm PT), the very same venue where he claimed a lightweight title more than three years ago. Three successful defenses came of his reign before dropping a 12-round decision to Mikey Garcia in their unification clash between unbeaten titlists last July in Los Angeles, California.

Following the disappointing draw with former two-division titlist Barthelemy (27-1-1, 14KOs) came the decision to move up in weight.

“This is a new lane for me,” noted Easter Jr. “I don’t have to worry about losing those five extra pounds, and we’re not cutting muscle for this fight like I’ve done in the past. I used to be angry during fight week, never wanted to do interviews or talk to anyone before a fight.

The expectation is to show off everything he’s changed in his most recent training camp. In Granados (20-7-2, 14KOs) comes a more favorable styles matchup, along with a hardened veteran coming to win. Granados— a 30-year old from the Chicagoland area who now lives in California—doesn’t boast a glossy record but has also never shied away from a challenge.  His first five losses came by the slimmest of margins, including a 10-round majority decision to Adrien Broner, Easter Jr’s stablemate back in their Feb. 2017 non-title fight.

Granados enters on the heels of a stoppage loss to former two-division titlist Danny Garcia in a welterweight bout this past April, but has dropped back down to his most comfortable weight for this fight.

“We know Adrian Granados is gonna bring it,” notes Easter Jr. “He’s definitely not coming to lay down, he’s coming to fight. This is a fight we wanted, to keep me focused on my goal of winning more titles. We’re just gonna keep moving forward.”

There’s no better way to leave behind the past, especially the parts you’d rather never again remember.

I was on his side, but he never filled out. Plodding and waiting, or counter punching. Same thing.

He should've done this a couple years back.