Robbie Davies Jr has described his Super-Lightweight showdown with Joe Hughes at the M&S Bank Arena in Liverpool as a "must-win" fight as he looks to explode onto the World scene at 140lbs.

The pair clash on March 30, shown live on Sky Sports in the UK and DAZN in the US, with the British and European titles on the line, and Davies Jr believes a win on home soil will propel his name towards potential fights with the likes of WBO ruler and Matchroom stablemate Maurice Hooker. 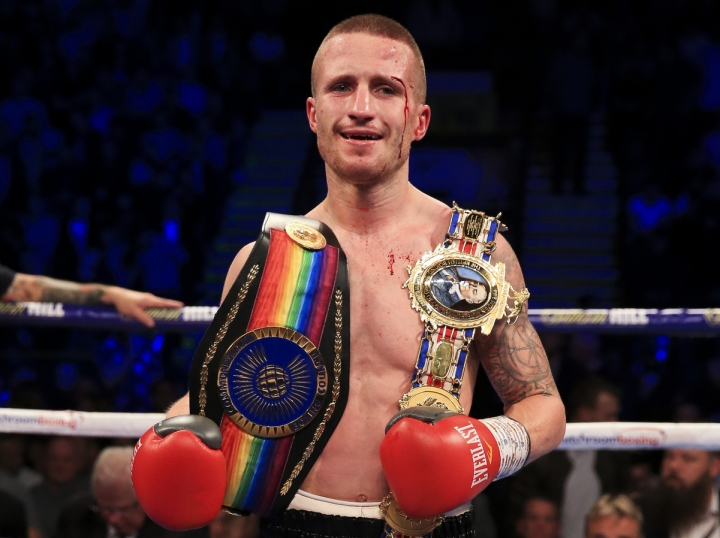 "I knew that I wanted the winner of Joe Hughes vs. Andrea Scarpa straight away," said Davies Jr. "I didn't mention any other names. When I watched the fight, I knew I wouldn't be the only Light-Welterweight in the country after the winner so I made sure I put my name out there as soon as I could. Eddie has delivered this opportunity for me on a plate and it's exactly what I wanted.

"I thought Scarpa was looking for one big shot all night and when he landed it it didn’t effect Joe anyway. I felt that Joe was more compact and the much better boxer. He jabbed the Italian's head off throughout the fight and deserved to pick up the belt. It was a good away performance so he won't be fazed coming to Liverpool.

"There won’t be any bad blood, it’s just business. He’s got that European belt and that’s what I need to push on to World level. I've never sparred him or anything like that but he was always considered one of the top kids during our amateur days. He's a nice lad and everyone gets on with him but I've got a job to do.

"Every fight is a must-win at this stage of my career. They offered me one fight to get the British and Commonwealth and now they’ve offered me another one for the European. I felt like a couple of years ago my career kind of stagnated and froze a little bit. These are the fights that I need to push on and progress to the next level."

Davies Jr got the better of Sunderland's Glenn Foot after a bruising and bloody battle for the British and Commonwealth titles in Newcastle last time out in October, but the popular Scouser was unhappy with his performance after an early cut scuppered his plans to take the fight to Foot.

"The cut has healed really well. We've got no concerns about it heading into the fight with Joe. Our tactics for the Foot fight completely changed because the cut happened so early on. There was blood everywhere and a heavy blow could have opened it up and forced the stoppage so we had to be careful. I had to get on my bike for pretty much the whole fight when we were planning on coming on strong in the later rounds.

"It was a massive platform to showcase my skills on but I don't think I performed anywhere near my best. It was a blood bath so I did what I needed to do to get the win. I've got plenty more gears to go through and levels to rise to. Joe has proved that he's European level at least and I think he'll bring the best out in me on March 30."