Roach Says a Prime Pacquiao 'Walks Through' Everyone at 147

Hall of Fame trainer Freddie Roach believes that a prime Manny Pacquiao would have walked through any of the top welterweights of today. 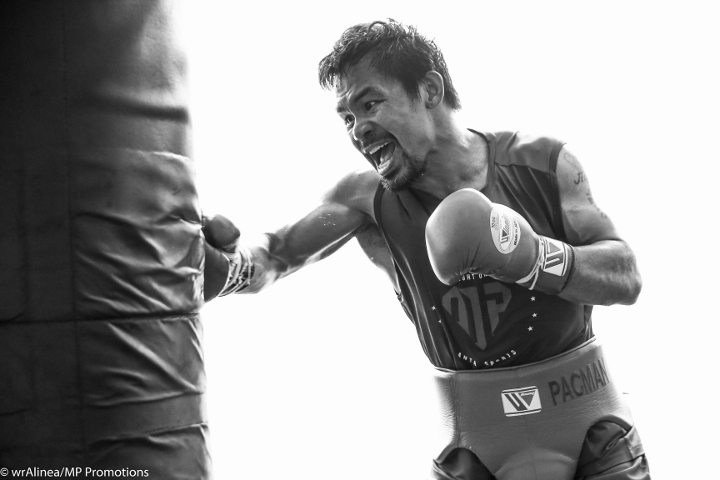 The first fight of Pacquiao's PBC deal is expected to take place in January, against former four division champion Adrien Broner. The Showtime Pay-Per-View bout is being targeted for Las Vegas.

Roach, who worked with Pacquiao for 16 years, told The Inquirer that the eight division world champion, in his prime, “would have walked through all of them (welterweight top dogs of today).”

Pacquiao parted ways with Roach earlier this year and is now being trained by best friend Buboy Fernandez.

In July, Pacquiao had his first bout with Fernandez in charge of the entire camp, and the boxer scored a one-sided knockout win over Lucas Matthysse to capture the WBA "regular" welterweight title.

Roach says a fight with Broner “would be a good challenge” for the 39-year-old veteran.

Broner was in action earlier this year, when he fought to a twelve round draw with Jessie Vargas.

But, Roach says "there has to be something big at the end of the road” for Pacquiao to accept a fight with Broner.

And the big payoff is likely a rematch with five division world champion Floyd Mayweather, who won a twelve round decision over the Filipino superstar back in May of 2015.

“The first fight was not so great, Manny had a bad [shoulder] injury, but that was all part of boxing,” added Roach. “So I would like to see it one more time.”

“[Pacquiao's] work ethic is still unbelievable. He works very hard every day. With the work ethic he has, I give him a chance with anyone out there."

[QUOTE=IceTrayDaGang;19225094]name those fighters!! stop playing around. who did manny loss to at 147? name those fighters. then name me the fighters spence beat at 147. LOL![/QUOTE] ——— Horn is one. Bradley. Floyd. The others were mostly bums (Brandon Rios, Mathysse…

if the self proclaimed tbe go to a temporary retirement to avoid the prime pac then the current 147lb will be like a walk in the park for a prime pac.

[QUOTE=Roadblock;19245707]Oscar was a contract weighted dead man walking. Mosley was ducked when begging for 144, he got beat by Floyd then a draw with a B grader then Mannys says ok weight dont matter. Clottey struggles to make 147 and…

[QUOTE=MisanthropicNY;19224790]I'd bet my life that prime Pac walks through everyone at 147. Easily, especially the Pac that smoked Oscar and Cotto. Only casual newbs or FIomo wouldn't realize that.[/QUOTE] The most honest opinion in this thread! Lets not forget floyd…