JARRELL MILLER should be slapped with a life ban from boxing for committing 'attempted murder', according to trainer Freddie Roach.

Miller was denied a licence to fight unified heavyweight chief Anthony Joshua on June 1 after recording an 'adverse finding' in a drug test prior to the bout.

The American will be able to reapply if his B Sample does not produce the same outcome, yet it is unlikely he will compete for the IBF, WBO, IBO and WBA 'Super' heavyweight titles at Madison Square Garden. 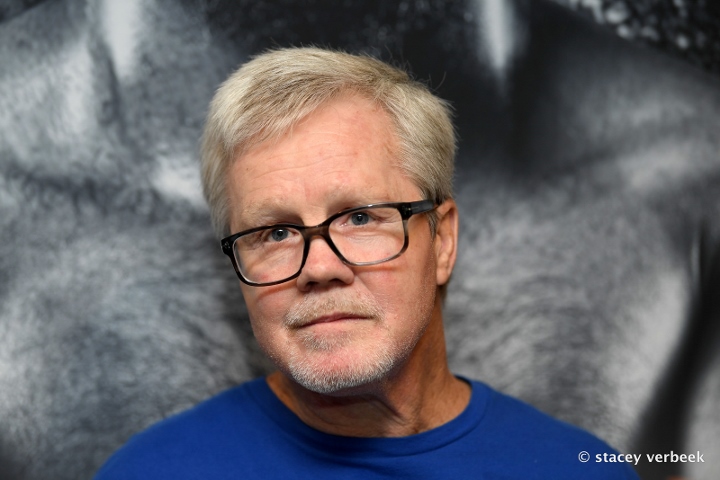 Joshua, who promoter Eddie Hearn insists will still be in action in New York on the same date, will now need to find another opponent in the wake of the news.

Legendary cornerman Roach is not wavered in his belief that drug cheats should be banned from boxing for life, stressing that a fighter's life could be placed in jeopardy.

"I'm so disappointed in these drugs [scandals]," he exclusively told Starsport.

"I still say that it's attempted murder, they should be banned for life.

"If the ban was stronger, nobody would do it. Let's face it, the ban isn't strong enough.

"He should be banned for life. This is combat sport, it is attempted murder. You can kill somebody out there."

Several names have been thrown in the hat to fill the void left by Miller on June 1, including Dillian Whyte, Manuel Charr, Adam Kownacki and Michael Hunter.

It is Cuban colossus Luis Ortiz, though, who leads the way with the bookies right now.

Roach speaks highly of Joshua, labelling the British star 'a real nice guy', while claiming that Ortiz would serve as a 'warmup' for him.

"Joshua's one of my favourite fighters," he said. "He's the best heavyweight in the world. I wish him well.

"I met him when he fought [Wladimir] Klitschko and he's a very nice guy, a real nice guy. I like him a lot and I hope he continues to win."

When asked how AJ would fare against Ortiz, Roach replied: "It's just a warmup, he kills him. Way too much, way too much."

Roach was speaking to Starsport at the final press conference for Amir Khan's showdown with Terence Crawford at the Garden on April 20.

And the 59-year-old, who trained Khan from 2008-12, believes his old fighter can upset the odds against arguably the greatest boxer on the planet right now.

"I'm looking forward to watching the fight," he said.

"Amir's a friend of mine and I trained him for a while. I hope he does well, but he's going against a guy that could be the best fighter in the world today. It should be an exciting fight though.

"I think if he goes out there and boxes for 12 rounds one at a time he can do that, but it seems like he'll get the other guy in trouble 'cos he has fast hands and good combinations and he'll go for that knockout, and sometimes when he's going for the knockout he gets caught.

[QUOTE=Sid-Knee;19683330]Yep, the dude is crazy. Him and Mexican Muppet are the very worst on here. There are some serious contenders to the throne, but none that will be able to turf any of these 2 idiots out, that's for sure.[/QUOTE]…

[QUOTE=Laligalaliga;19674130]champion4ever is a bad poster full of contradictions. He contradicts himself every now and then. Am surprised the way he soft pedals on this Ortiz bogeyman tag now the the opportunity is right before him. He has always advocated for…

[QUOTE=champion4ever;19673495]Now Sid-Knee, it's no secret that Matchroom has a shortage of talent. If this DAZN deal is going to work he is going have to sign some American fighters. How long do you think Matchroom can survive in this business…

[QUOTE=champion4ever;19673462]:lol1: Sid, hello my friend; How have you been? It's always nice hearing from you. Now to address your concerns; Haymon has to answer to his bosses at CBS and Fox. He doesn't have to answer to me nor should…

[QUOTE=mrjoeblive;19672811]So again, why didn't AJ and crew offer Ortiz a fight with a full camp not a few weeks to prep for a super fight. As for Ortiz not jumping at the offer, some fighters really enjoy the time between…