Guillermo Rigondeaux had a decision to make between the first and second rounds.

Would he choose to fight forehead to forehead with Liborio Solis, inviting the heavy-handed brawler to wail him to the body and shake him with uppercuts to the delight of the crowd but at the risk of losing the fight, or would he outbox Solis the same way he had nearly 400 other boxers in his lifetime to a cacophony of boos and jeers?

He would choose the latter, shutting Solis’ offense down almost completely, earning a split decision and a secondary world bantamweight title at a more advanced age, 39, than anyone has ever won one.

Rigondeaux’s life and career have been a tragic series of unwinnable propositions. Choosing between the love of his father or his mother when deciding whether to attempt to defect Cuba for the first time. Choosing between seeing his family again or being compensated for his efforts in the ring, between two countries using Cuban athletes as political pawns, between being exciting or being successful.

For most of his career, Rigondeaux has held firm in his vision of boxing. Stand in front of his opponent, make them miss, and make them pay with shots hard enough, just often enough that ultimately they question whether they even want to try to hit him or not. But one fight ago, it appeared that the old master wanted to try something new, like Miles Davis making a New Jack Swing album, just to prove that he could. He exchanged shots with Julio Ceja in a thriller that concluded with one of the most picturesque finishes of his career, dropping his opponent with a rocket of a left hand.

For one night even those who lamented his cautious approach over the years were thrilled and hoping for a late-career action hero version of Rigondeaux.

"I didn’t like him taking shots the way he was taking them to prove something. I told him he’s too old to prove anything. Just be himself and box and do the things that got him to where he’s at right now," trainer Ronnie Shields told BoxingScene last week.

For one round against Solis, it looked like he either wasn’t going to take Shields’ advice, or was finally too old for his legs to do anything other than lean on the inside with his opponent. Then, all of the sudden, the second round started and Rigondeaux was the same as he ever was—maybe a little slower, maybe slightly less graceful at times, but still every bit as unhittable as he was at his peak as the statistically best championship-level defensive fighter in the sport. After landing 28 punches in the first round, Solis landed just 31 the rest of the fight. 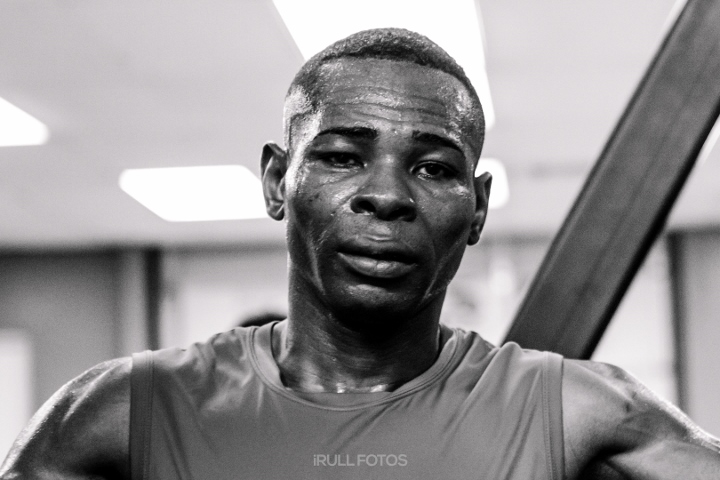 The desires of fight fans are often unfair and illogical—such is the nature of rooting for or against something so perilous for our entertainment. Sure, a phone booth slugger version of Rigondeaux was, and would be exciting to watch, but it wasn’t a reasonable thing to expect of him. To invite more contact on the cusp of turning 40 would be tactically and medically foolish. Moreover, history suggests that even fighters who were offensive dynamos in their younger years implement a more measured approach—see the late-career version of Larry Holmes learning to jab and hold, the methodical second-act George Foreman, or the final decade plus of Bernard Hopkins nullifying one younger challenger after another. For Rigondeaux, who has been risk-averse at the best of times in the ring, to fight with greater abandon at an age when his body is less equipped to endure the punishment would be silly. To actively hope that Rigondeaux’s body fails him and forces him into more brutal fights is something more sinister entirely.

Even when Rigondeaux has done conventionally exciting things—lumping up Nonito Donaire so badly he had to fight the final round with a hand over his eye; disfiguring the face of Hisashi Amagasa; shattering the jaw of Jazza Dickens in mere minutes—it’s never been done in a manner satisfactory enough to the audience for them to change their tone. As Butler puts it, “a good metaphor for it is if LeBron James refused to dunk on fast breaks and just laid the ball in. In America, people want a rock n' roll style, Rigo is Chopin or Mozart.”

Rigondeaux will never receive the universal, or even the majority of the support from the fans, but one has to respect his abilities. Even the professional version of Rigondeaux we’ve seen, which began at the age of 29 and was even then probably not in his true prime, has been a unique, generational talent. As Butler points out, the true indicator of his greatness lies in the fact that the most highly regarded ring technicians of our lifetime—Floyd Mayweather, Roy Jones Jr., Andre Ward—have all expressed respect and admiration for Rigondeaux.

“The group that has never been hostile, and have been almost diametrically opposed to that response, is the elite fighters themselves. Every great fighter that I've profiled, the first thing they want to talk about is Rigondeaux and how he does what he does. None of these guys complain about Rigo's style,” said Butler. "It was (always) important for him to gain the recognition of the fighters he admired. To have the respect of his colleagues, particularly his elite colleagues."

The appreciation from his fellow greats might have to sustain him. He won’t garner fanfare from the American audience, and though he deserves to be the first post-Revolution Cuban to be inducted into the International Boxing Hall of Fame when he chooses to retire, there’s no guarantee that a generation of boxing writers who largely expressed disdain for his manner of fighting will vote him in ieither.

In A Cuban Boxer's Journey: Guillermo Rigondeaux, from Castro's Traitor to American Champion, Butler describes meeting Rigo for the first time, and remarks that his was the saddest face he’d ever seen. Butler would later say that Rigo’s face was even sadder when he came to America and won a world title. The pain Rigondeaux has endured in his life is more than he could have ever endured in the ring, no matter how exciting he chose to be.

Following his victory over Solis, Showtime’s Jim Gray asked Rigondeaux whether he was bothered by the fans’ booing throughout the fight or not. Rigo’s response paradoxically incapsulated his entire tragic journey: "No, not at all. Look at what the booing of the fans gets me."

[QUOTE=_Jordan_;20394493]I m always happy to see you and to know that you still here makes me happy, you are a great guy, i hope to see you again in another good fight in NY[/QUOTE] Thanks, brother. The feeling is mutual.…

[QUOTE=CubanGuyNYC;20394046]Haha I know you were. And yes I am. Lol Welcome back, bro![/QUOTE] I m always happy to see you and to know that you still here makes me happy, you are a great guy, i hope to see you…