Rigondeaux: I Wanted a Real Champion To Show What I Can Do!

Vasyl Lomachenko is a heavy favorite, but he's not underestimating Guillermo Rigondeaux - who the once-beaten boxer views as an intelligent, strong and very skilled opponent.

Rigondeaux, who is the WBA world champion at 122-pounds, is moving up by two full weight divisions to face Lomachenko at 130-pounds. 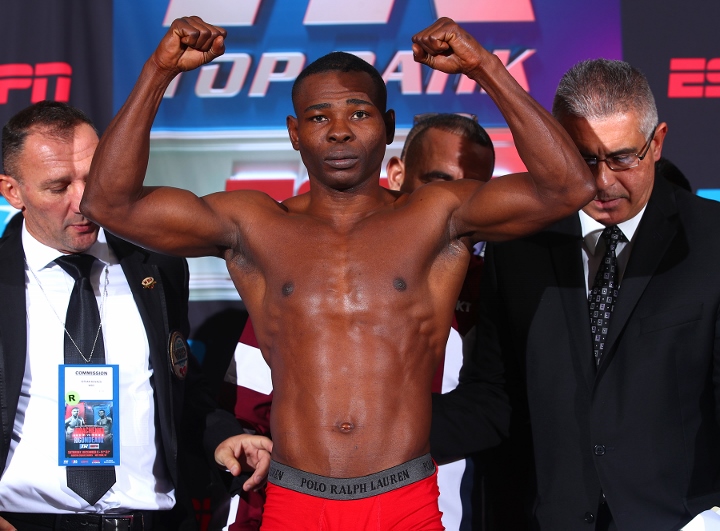 While the jump in weight is risky, Rigondeaux felt it was necessary to make a statement regarding his own level of skill.

The contest is a first for boxing, where a pair of two-time Olympic gold medal winners will collide in the ring.

"I wanted a real fight against a real champion," said Rigondeaux. "We are both real boxers, we were Olympic champions, and if I have to go up two divisions to face him, we have to do it."

"I would have liked to fight at a lower weight, like for example at 126 - but I'm fine with the way things are. I want to show the world what I can do, so I'll fight at whatever weight I have to."

Lomachenko is two inches taller than Rigondeaux, although his reach is shorter 65 inches against 68. Both are left-handed.

"He (Rigondeaux) agreed to go in this division because he knows that a fight against me is the kind that can give him the showcase he's needed in his professional career," Lomachenko said.

"I, like all boxers, will try to take advantage of my physical advantages, if I have them, added them to my style of boxing, which has given me championships in the amateurs and the professionals."

"I told them to give him what he wanted because I really wanted to face him. I like to fight against the best, and after the fight I'll tell you if it's the best opponent I've ever faced."

[QUOTE=Legendary Hater;18319067]What you drinkin', Cowboy?...I'd normally be on the Russell's Reserve Select Single Barrel, but I had to break out the old Bunnahabhain tonight...[/QUOTE] Jack Daniels on the rocks

[QUOTE=TexasCowBoy;18319005]Alright ....ladies and germs.....time for some liquor[/QUOTE] What you drinkin', Cowboy?...I'd normally be on the Russell's Reserve Select Single Barrel, but I had to break out the old Bunnahabhain tonight...

Alright ....ladies and germs.....time for some liquor