The summer season premiere of Boxeo Telemundo featured a different look beyond the ropes but a satisfying result for Ricardo Espinoza.

A dominant performance was turned in by the Tijuana slugger who was extended the distance for the first time in nearly three years. It was welcomed in the end as he outpointed previously unbeaten Brandon Valdes over 10 rounds Friday evening in front of a crowdless Osceola Heritage Park in Kissimmee, Florida.

The lack of fans in attendance did not discourage Espinoza from the typical high-octane performance which he has grown accustomed to delivering on this circuit. The former bantamweight contender took the fight to Valdes from the opening bell, forcing an inside fight and a hectic pace. 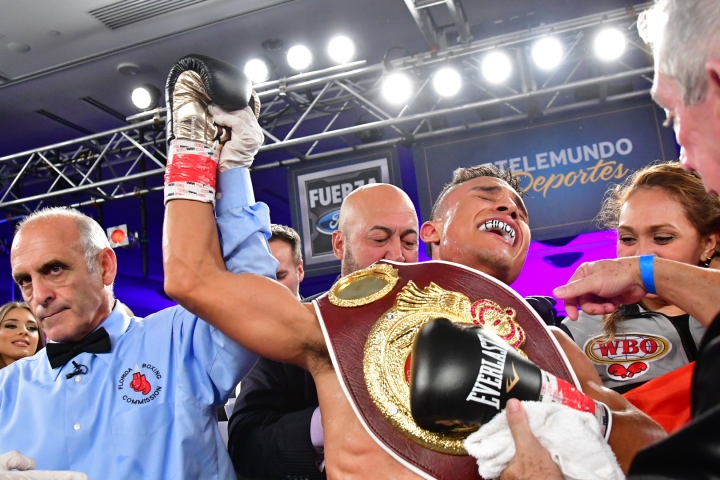 Espinoza’s class at the contender level was telling, as he consistently outworked Valdes on the inside. The 23-year from Tijuana was at his best when able to initiate exchanges, raking Valdes’ body with right hands and digging left hooks while pinning his unbeaten foe along the ropes.

Valdes managed to create some distance in round four, not to the point of gaining momentum but at least slowing down the tempo and forcing Espinoza to follow him around the ring. Espinoza adjusted, managing to cut off the ring and prompting the 21-year old to frequently clinch his way out of one-way exchanges.

Espinoza resumed his role as the aggressor at the start of the second half. Valdes tried to keep his opponent at bay with jabs and right hands but wasn’t committing to either shot to the point of capturing Espinoza’s attention. Stamina became an issue for Valdes who has fought past six rounds just once before in his career—in his previous fight last August amidst a career spent facing lesser opposition.

The latter rounds saw Espinoza take the lead on every exchange, constantly forcing Valdes to the ropes as he continued to put in punishing body work. Valdes’ offense was limited to punch and grab, deterring from an otherwise fun action and at the expense of his previously unblemished record.

Espinoza had Valdes briefly stunned after landing an overhand right midway through round nine. It was the closest either fighter had been hurt in a main event which didn’t feature any knockdowns. Valdes continued to box in reverse, avoiding a right hand by Espinoza to score with a right uppercut in round ten. Espinoza brushed past the sequence to land a body shot, pushing the action until the final bell in handing Valdez (13-1, 7KOs) his first career defeat.

Friday’s win marked the first time Espinoza—who improves to 25-3 (21KOs)—was forced to hear the scorecards since an October 2017 points win over Luis Becerra. Eleven knockout wins had come of his last 12 starts, along with a 12th round stoppage loss to John Riel Casimero in their interim bantamweight title fight last April.

Espinoza was previously 3-0 (3KOs) on the Telemundo circuit though will gladly settle for that knockout streak ending for the sake of remaining in the win column. He has now earned two straight victories, both coming at junior featherweight where he will aim for a title shot within the next 12 months.

The event marked the first of four consecutive Fridays which will feature boxing on Telemundo, The show was the first on the network since the start of the ongoing coronavirus pandemic—with its March 13 spring season finale marking the final televised card in North America to feature fans in attendance prior to the global health crisis.

Former amateur standout Bryan Polaco enjoyed a successful pro debut, scoring a 1st round knockout of Elliott Brown. The 22-year old junior middleweight southpaw from Fajardo, Puerto Rico floored Brown (2-17) with a right hook to the body to put an end to the bout shortly before the Telemundo cameras went live.

Polaco (1-0, 1KO) claimed the national amateur championship in each of the last four years in Puerto Rico.

Jorge De Jesus Romero (17-0-1, 12KOs) managed to preserve his unbeaten record but was forced to settle for a draw versus Daniel Lozano (15-9-1, 11KOs) in an uninspiring performance. The Miami-based Cuban junior featherweight struggled to find a second gear against Lozano, a longtime series favorite from Central Florida but who has seen better days. Lozano managed to win 75-77 on one scorecard, overruled by matching tallies of 76-76 to produce the stalemate.