MANILA, Philippines  -- Knockout-artist WBA interim-bantamweight champion Reymart Gaballo (21-0, 18 KO's) proved to be too fast and destructive for bigger Japanese warrior Yuya Nakamura (9-3-1, 7 KO's), rocking him mercilessly from the get-go, stopping him in two chapters in their non-title clash Saturday (Feb 9) on ESPN5 Philippines.

After dropping Nakamura in the first stanza, Gaballo increased the tempo in the following chapter with severe attacks to Japanese's head and mid-section, landing a perfectly-placed right to the chin, followed by a crushing left hook to the liver of Nakamura that propelled the roughed-up Nippon fighter head first to the blue canvas right in his own corner.

With unsteady legs and a huge effort, the strong Nakamura somehow made on his feet, but veteran third -man Virgilio Garcia did not take any chances, waiving the fight off right there.   Official time of TKO was 1:44 in round two. 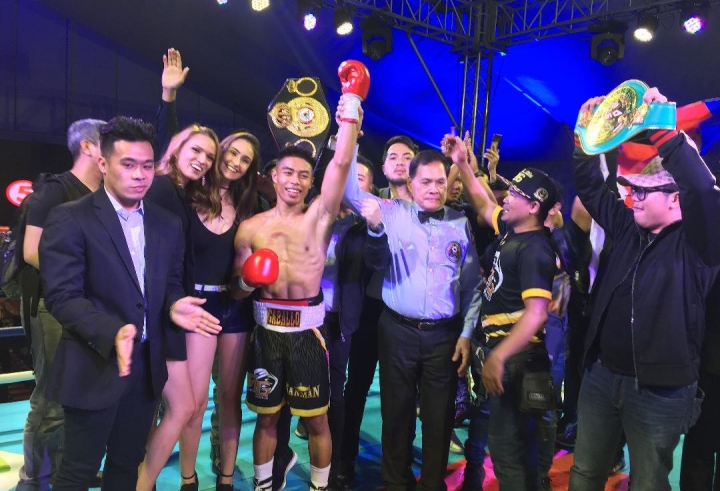 "Gaballo is interim champ as well as # 1 mandatory challenger, and we are ready for battle.   Anytime, anywhere," assured Gaballo's award-winning promoter JC Manangquil of Sanman Boxing."

The 23 year-old Duno -- back in his native Philippines after wins in Indio, California, and the Forum in Inglewood  --  did not waste a second in landing hard on the head of the brave Dhanda, knocking him down in the opening stanza and rocking him unconscious in the second lap.

Dhanda was taken to a nearby hospital for a complete check, being cleared hours later.

"Kuldeep (Dhanda) got knocked out hard.  Got him to hospital.    But now he is good," said his coach Roshan Nathanial.    "All is clear.   No problem.    This is boxing.   Indian boxers are strong.  Have lion heart."

In a well-matched collision, the "Doberman" Dave Apolinario (10-0, 6 KO's) of the Sanman Stable outmaneuvered "The Hammer" Romshane Sarguilla (7-2-2, 4 KO's) for an 8-chapter unanimous decision win in the flyweight division, with both fighters clearly giving their very best effort.

However, Apolinario, who comes from a family of boxers, proved to be the more skilled and effective gladiator against a hard-swinging Sarguilla whose fighting approached was rather unrefined and wild.

Also, unbeaten Presco "Carjun" Carcosia (4-0-1, 4 KO's) of General Santos City and 7-year-veteran the "Amazing" Renerio Arizala (13-8-3, 5 KO's) of Bacoor, Cavite fought to a draw in their 6-rounder melee in the featherweight division, with all judges scoring 57-57.

The card was a production of promoters JC Manangquil and Dexter Tan of Sanman Boxing Promotions in association with the Midas Hotel & Casino, "1Pacman Party List" of Manny Pacquiao, and the support of Lloyd Dennis Manaloto VP and Head of ESPN5 Philippines.

The author Carlos Costa is a Panama-born fight reporter living in Cebu, Philippines.   He attended this boxing show in Manila.  Carlos can be reached by email [email protected] and whatsapp +639184538152.