For as long as the matchup has been a possibility, Rey Vargas has listened to Tomoki Kameda’s repeated promises of avenging an amateur loss that occurred more than a dozen years ago—along with everything else his colorful challenger has had to say along the way.

The two will finally get to meet this Saturday, headlining a DAZN livestream from Dignity Health Sports Park in Carson, Calif. The bout will mark the third time Vargas has played the famed venue (previously known as StubHub Center, and Home Depot Center before that), including his first-ever fight in the United States back in Aug. 2013.

As familiar as the unbeaten super bantamweight titlist is with the locale, it’s the ring itself where he finds himself in his comfort zone.

“I’ve always described myself as someone who doesn’t talk about what I can do, but rather what I can show in the ring with my fists,” Vargas (33-0, 22KOs) insisted during Thursday’s pre-fight press conference. 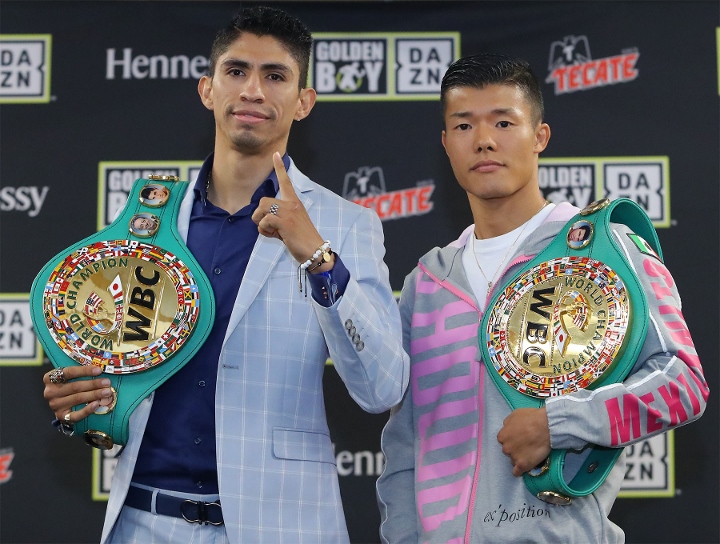 The demeanor of the lean Mexican boxer comes in stark contrast to that of Kameda (36-2, 20KOs), one of the sport’s more colorful characters who always has plenty to say. The Japan-born former bantamweight titlist—who relocated to Mexico City as a teenager—took something as serious as an obligatory staredown and turned it into a playful moment, sticking his tongue out at the defending titlist to abruptly end the session.

It's the best that Kameda could do to prevent from making the upcoming showdown any more personal than is already the case. He positioned himself into title contention following a 12-round win over Abigail Medina last November in Japan, having spent the past several months vowing revenge for their previous meeting back in 2007.

Vargas took the moment and his challenger’s comments all in stride, aware that it will be a different story come fight night.

“I know that Japanese fighters are amazing ring warriors, always willing to leave it all in the ring,” noted Vargas of what he expects in the fifth defense of the 122-pound title he claimed more than two years ago. “But Mexican fighters are warriors too and I can’t wait to show it on Saturday night.”

[QUOTE=ShoulderRoll;19898203]He was just speaking the truth. What did you want him to say instead? Mexicans are pillow-fisted sissies that can't fight and run around the ring all night? That would just be a lie.[/QUOTE] That's what Rey Vargas is though,…

[QUOTE=CanGGG;19898304]vargas did say japanese are warriors learn to read instead of reading a book by its title[/QUOTE] Are you a scholar ? I’ll out read you and out hustle you in your own one story house while your over weight…

[QUOTE=RGJTMMRDCMJRJSM;19898824]Kameda is more Mexican than you are[/QUOTE] Last night’s fight proved your point. Mexican crowd were booing the sht outa Vargas for not engaging enough.

[QUOTE=inidouh;19899581]To make such a statement wouldn't be entirely dishonest because in my humble opinion most Mexicans are bums who can't fight.[/QUOTE] Boxing history and a list of current champions/top contenders would easily prove your opinion wrong.

[QUOTE=ShoulderRoll;19898203]He was just speaking the truth. What did you want him to say instead? Mexicans are pillow-fisted sissies that [B]can't fight[/B] and run around the ring all night? That would just be a lie.[/QUOTE] To make such a statement wouldn't…