Tomorrow is my favorite day of the year.

OK, maybe it's a few pegs behind my wife and son’s birthdays, our wedding anniversary and Christmas -- but it's still pretty darn big.

A date, over the course of seven years back in the 1980s, that changed my life.

First, it was in 1981. Tommy Hearns. Ray Leonard. The "Showdown" at 147 pounds. Any fight fan in my age group remembers it like it was yesterday. And as I glance at the calendar and realize it's now been 39 years (as of tomorrow, that is) since it happened ... I'm amazed.

It was that fight more than any other that got me revved-up. I was a gigantic Tommy fan. I was sure he'd win. I couldn't wait until the next day, when I'd go to Edward Town Junior High School and lord it over all the silly "Sugar Ray" fans while collecting on a bevy of lunch money bets.

A quarter here. Fifty cents there. Enough profits to keep the Pac Man machine going for hours complete with a belly full of ice cream sandwiches.

Suffice to say, it didn't go how I wanted. Tommy is ahead, then in trouble, then ahead again, then stopped in what's still as dramatic a late rally as you'll ever see, featuring as compelling a message from trainer to fighter as has ever been delivered in any corner.

Thinking about it gives me goose bumps even now in 2020.

Instead, a few weeks later, as part of the seventh-grade English class that occupied seventh period every day, our teacher -- Thomas J. Rycombel -- gave us an assignment. Take one of the pre-determined titles that he'd scribbled on the board and write something. Short story. Poem. Fictional tale. Whatever. 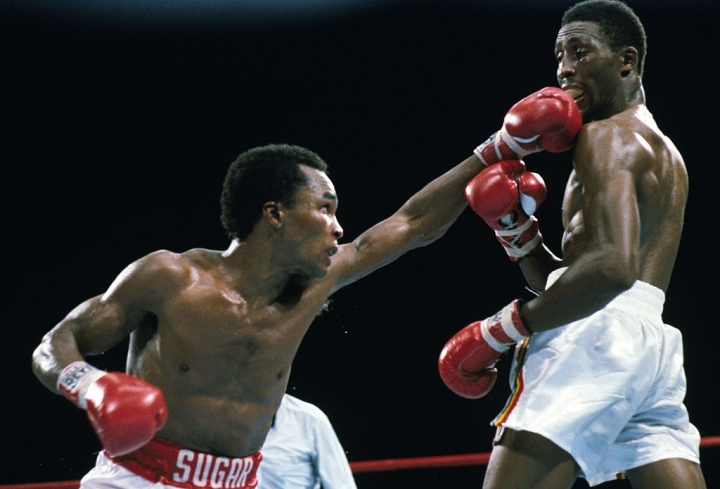 Six pages later, Mr. Rycombel had as thorough a wrap-up of the Leonard-Hearns fight as was possible from a 12-year-old pre-Internet kid whose fight-bereft hometown -- Niagara Falls, N.Y. -- was every bit of 2,290 miles away from the Caesars Palace parking lot where the action actually took place.

And a day or two later, when I picked up the graded paper, saw the A-plus and the accompanying note -- "You ought to do this as a career, buddy" -- I was hooked.

Even at 12, there was nothing else for me.

Seems only fitting that exactly seven years later (Sept. 16, 1988) I walked up the stairs at the Niagara Gazette for my first day as a part-timer with my hometown paper, surrounded by the guys -- known to me but unknown to them – who had taught me to read with years of box scores, columns and game stories about the New York-Penn League, Metro Atlantic Athletic Conference and Porter Cup.

They were Bill McGrath, Bill Wolcott and Tom McDonough. My small-town journalism heroes.

I remember them all as if it were yesterday, too.

And when I clicked "RETURN" on my first story -- the nightly recap of that year's Lake Ontario Fishing Derby -- I got the rush of adrenaline I still get today, each and every time I send one off to the editors and later to the dozens, hundreds or thousands who take the time to read.

To say I've been lucky since those nights would be an understatement.

I've covered multiple fights in Las Vegas, New York, Atlantic City and two foreign countries. I interviewed both Leonard and Dundee for stories. I was ringside for Hearns' last fighting appearance in downtown Detroit in 2005. And I've been recognized for my work by an association that I'd dreamed of joining long before I ever did.

Because for me anyway, "It happened that day."

And thanks again, Mr. Rycombel. I owe you one.

P.S. – I don’t care what anyone says (and that means Tom Kaczmarek, Dalby Shirley… anyone), Tommy whipped his ass in the second fight. Two knockdowns and several other instances where Ray was hurt, including the start of the 12th round before Hearns himself was rocked, but never knocked down.

Leonard himself admitted Tommy deserved the nod, but the two judges who officially deprived Hearns of a career-defining win committed the most gut-wrenching scorecard crime I’ve ever seen.