Kiryl Relikh didn’t defeat Eduard Troyanovsky as easily as he beat Rances Barthelemy, but Relikh did more than enough Sunday to advance in the World Boxing Super Series’ 140-pound tournament.

Relikh topped Troyanovsky by unanimous decision in their 12-round fight for Relikh’s WBA world super lightweight title at Yokohama Arena in Yokohama, Japan. Relikh (23-2, 19 KOs) won by the same score, 115-113, on the scorecards of judges Luigi Boscarelli, Gustavo Jarquin and Pawel Kardyni.

Relikh made the first defense of the then-vacant WBA world 140-pound championship he won when he conquered Cuba’s Barthelemy by unanimous decision in their 12-rounder March 10 in San Antonio. DAZN streamed the Relikh-Troyanovsky fight on delay, following live coverage of Naoya Inoue’s first-round knockout Juan Carlos Payano in the main event. 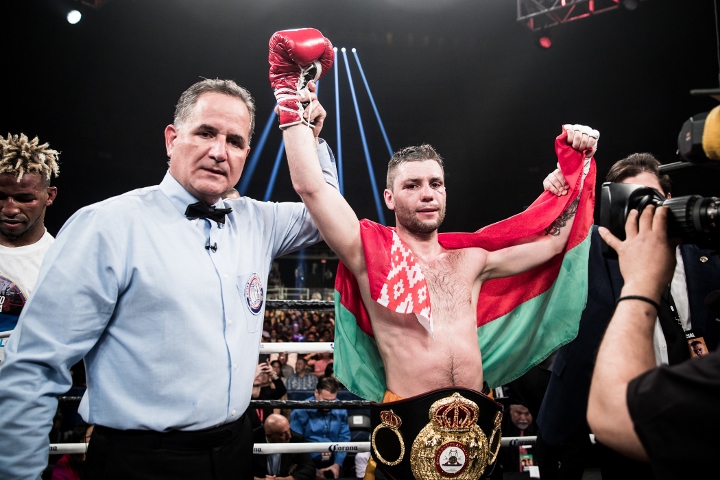 Belarus’ Relikh, 28, also advanced to the semifinals of the WBSS 140-pound tournament. He’ll encounter the winner of an October 27 bout between New Orleans’ Regis Prograis (22-0, 19 KOs) and England’s Terry Flanagan (33-1, 13 KOs) at Lakefront Arena in New Orleans on a date and at a site to be determined.

Russia’s Troyanovsky, 38, lost for just the second time in nearly nine years as a pro (27-2, 24 KOs). His only previous loss was a first-round knockout to Namibia’s Julius Indongo in December 2016.

All three judges scored five of the 12 rounds for Troyanovsky, but by the championship rounds Relikh looked like he was in control of their WBSS quarterfinal.

Troyanovsky was aggressive in the 12th round and landed two hard right hands within the first 30 seconds of that final round. A stiff jab by Troyanovsky and a hard right hand by the challenger made Relikh retreat with just under a minute remaining in the fight.

Relikh clipped Troyanovsky with a short left hook late in the 11th round, but Troyanovsky fired back with a straight right hand that landed flush. Neither fighter landed a noticeable power shot in the first 2:45 of the 11th.

Troyanovsky appeared tired in the ninth round, when he mostly threw sloppy jabs.

Relikh’s right hand knocked Troyanovsky off balance late in the eighth round, several seconds after Relikh landed a left hook. Troyanovsky connected with a left hook just after the halfway point of the seventh round.

Relikh and Troyanovsky mostly flicked jabs at each other throughout the sixth round. Troyanovsky mostly kept away from Relikh’s power shots in that round, except for the right hand Relikh landed with about 15 seconds remaining in it.

Relikh’s right hand backed up Troyanovsky about a minute into the fifth round. Relikh also landed a left hook that affected Troyanovsky with about 30 seconds to go in the fifth.

Troyanovsky hit Relikh with a left hook at the 1:20 mark of the fourth round. Troyanovsky also did a better job of blocking Relikh’s right hand in those three minutes.

Both boxers landed hard shots in the final minute of the third round. Relikh backed up Troyanovsky with an overhand right, but the challenger came back to crack Relikh with a right uppercut a few seconds later.

Relikh drilled Troyanovsky with a right hand just before the two-minute mark of the second round. A jab by Relikh snapped back Troyanovsky’s head with a stiff jab later in the second.

I scored it 117-11 for Relikh, surprised it was that close on the cards. Was a good, solid fight and another nice win for Relikh