Reigniting Super Fly After a Breather

Far from the spectacle and riches generated in Las vVgas last weekend, one of boxing’s most satisfying divisions over the last half decade resumes hostilities Saturday in Texas (DAZN, 8 PM EST).

On the undercard on Mikey Garcia-Jessie Vargas, 30-year old WBA 115 lb. titlist Khalid Yafai (26-0, 15 KO) of the UK attempts the sixth defense of his belt against Nicaragua’s 32-year old Roman Gonzalez (48-2, 40 KO). As far as replacement opponents go, it’s hard to think of a better one than Gonzalez.

The original plan was a little different. Yafai was slated to face WBC and Mexico’s 29-year old lineal/TBRB/Ring champion Juan Francisco Estrada (40-3, 27 KO) in a unification bout but an injury to Estrada scuttled plans.

Gonzalez, the former WBC titlist at super flyweight (or Jr. bantamweight; feel free to pick), four-division titlist, and one-time lineal flyweight and pound-for-pound king, was waiting in the wings. Since suffering consecutive defeats to Thailand’s powerful Srisaket Sor Rungvisai in 2017, first by debated decision and then by knockout, Gonzalez had been a sparing presence on the divisional scene. A lengthy layoff ended in 2018 with a knockout of Moises Fuentes followed by a knee injury, surgery, and another long layoff ended late last year with knockout of Diomel Diocos.

It’s the biggest fight in the division since Estrada avenged his loss to Sor Rungvisai last April and comes at a moment when the division needs it badly. Smaller divisions need a little something extra to capture attention in the US market. Since Estrada-Sor Rungvisai II, it’s been slim pickings.

The remainder of 2019 was an uncommon down time versus recent vintage. Estrada fought only once more. Sor Rungvisai, now 33, hasn’t fought since and still has nothing scheduled.

Gonzalez’s arrival in the division, the fanfare he brought from the three lower weight divisions, and his promotional attachment to Gennady Golovkin made for the hottest 115 lb. run in the States since Vic Darchinyan, Cristian Mijares, Alexander Munoz, Jorge Arce and others caught fire in the mid-2000s. From September 2016 to April 2019, fans were treated to Gonzalez’s fights with Carlos Cuadras and Sor Rungvisai, Estrada’s battles with Sor Rungvisai and Cuadras, Cuadras-McWilliams Arroyo, Arroyo-Kazuto Ioka, and Ioka-Donnie Nietes.

Not genuinely part of that mix until now were two other titlists that emerged around them. 28-year old IBF beltholder Jerwin Ancajas (32-1-2, 22 KO) of the Philippines has notched eight defenses since winning his strap in 2016 but hasn’t come near a big fight yet. Yafai has reigned since 2016 as well.

Yafai has finally been invited to the party in a big way. In Gonzalez, he has an opponent with great name value but also an opponent no one can be sure about right now. How much does Gonzalez have left? Given his style, size, and miles, there are reasons to think this is merely a career epilogue. For Yafai, it doesn’t matter. A win keeps the hopes for an Estrada showdown alive and elevates him at a time when hostilities look ready to resume in a big way.

There are only so many chances to be the man to potentially end a guaranteed future Hall of Famer. 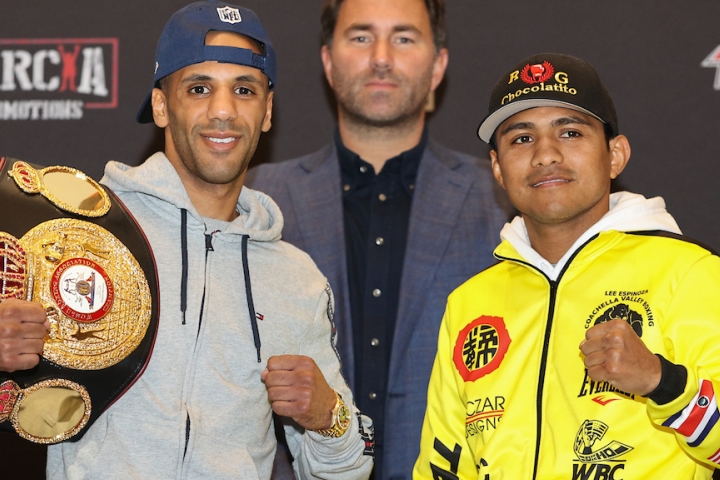 If Yafai falls short, it breathes new life into the career of Gonzalez. His shelf life is undoubtedly not as long as some of the other men in the division but lesser modern greats have found a path to extending their careers. A win for Gonzalez opens the possibility of clashes with fellow four-division titlists Ioka and a Donnie Nietes (the third and fourth men to win belts from 105-115 after Leo Gamez and Gonzalez) who has yet to formally retire.

It also keeps the door open for a fight hardcore fans have wanted to see again for almost a decade. It was supposed to be Yafai-Estrada...why couldn’t it instead resolve at Estrada-Gonzalez II? What we have this weekend is a fresh match that could go multiple ways with real implications for the immediate future.

It’s hard to ask for more in the ring. It’s not the only place where interesting things are happening in 2020.

Japan’s 30-year old Ioka (25-2, 14 KO), who became a four-division titlist on his second try after Nietes vacated the WBO belt,  is staring down the barrel at a fascinating national clash. The WBO has ordered a fight with three-division titlist Kosei Tanaka (15-0, 9 KO). Only 24, Tanaka has marched through the divisions so far but hasn’t faced a veteran the level of Ioka yet.

That’s a good start place for the year. Prior to agreeing to the rematch with Estrada, there was some chatter about Sor Rungvisai facing Ancajas in a unification match. Could the idea of them facing off be revisited with nothing serious on the docket for either? Estrada’s certain return leaves multiple options, including a rubber match with the Thai banger or an attempt to be at least partially unified in his second weight class after flyweight. Then there’s also the talented WBA leading contender, 29-year old Andrew Moloney (21-0, 14 KO) of Australia, lingering with the potential to add even more depth to a still deep domain.

The Super Fly’s had their breather and thankfully it wasn’t too long. This Saturday, we get back to the good stuff.

Estrada vs Gonzalez 2 would be Great......Estrada is a Bad MoFo

Wonder what he's still got in the tank after that stoppage and the layoff. Missing me some sub-122 lbs action. LOL

[QUOTE=Mick Higgs;20425460]If any division needed a WBSS it's 115. Along with the mentioned Estrada, Yafia & Gonzalez the likes of Ancajas, A.Maloney, Ioka, C.Edwards & F.D.Martinez ETC, could provide some real excitement![/QUOTE] I know he’s been inactive but SSR in…

The 2 best in the class are still not fighting so if its a breather its still a breather. Estrada has glass bones, they will never be healed.

If any division needed a WBSS it's 115. Along with the mentioned Estrada, Yafia & Gonzalez the likes of Ancajas, A.Maloney, Ioka, C.Edwards & F.D.Martinez ETC, could provide some real excitement!