The third man on the ring in Quebec, when Adonis Stevenson was knocked out by Oleksandr Gvozdyk, is very troubled by the aftermath of the contest.

According to referee Michael Griffin, he's has lost fifteen pounds since the night of the December 1. Griffin was back to working last Saturday night in New York City, as the referee for the welterweight bout between Sadam Ali and Mauricio Herrera at Madison Square Garden.

"I wanted to get back to action right away. It's like after an accident, you have to start again as soon as possible," said Griffin to The Montreal Journal. 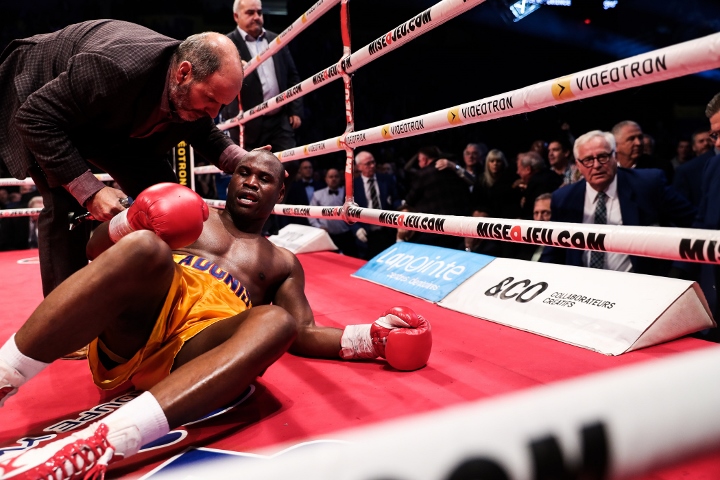 Stevenson took numerous hard punches in the eleventh round and was dropped own. Griffin quickly waved off the contest.

After the fight, Stevenson felt ill and dizzy. He was taken to the hospital where a severe brain bleed was discovered. He's been in a medically induced coma since.

"I had to watch the fight again at least a hundred times. Everything went so fast. I was dealing with a southpaw against a right-hander and it's harder to always have an open angle to intervene. I can not see how I could have reacted otherwise. I saw that Stevenson could no longer defend himself. But because of the movements of the two boxers and my position, I had to wait a second," said Griffin.

"I lost my appetite, I lost more than 10 pounds. Every night, I wake up at 4 am with the images of the fight in mind."

Griffin is aware that it was not a single punch that caused the injury suffered by Stevenson. Griffin was also on duty in Toronto when Badou Jack nearly knocked out Adonis in the last 30 seconds of their fight earlier this year.

It has to be tough. Peace to him, a good soul deserves to live with tranquility. A bad soul like Clenelo who injects steroids and takes drugs should not.

[QUOTE=Squ□redCircle34;19366849]Same thing could’ve happened to Tyson Fury! Fury got hit with a straight right that buckled his legs and then got walloped with a left hook on his way down and then he hit his head on the canvass and…

That was karma coming for chickenson! nothing could have prevented it!!!!

I have seen many times a human ref was far to late,example The Mercer Morrison,(THINK IT WAS?) was a few shots late.In Adonis Stevenson case,was Nothing giving indication was late.Sometimes the exact situation happens that no warning is gave.I think…

Same thing could’ve happened to Tyson Fury! Fury got hit with a straight right that buckled his legs and then got walloped with a left hook on his way down and then he hit his head on the canvass and…