Ivan Redkach can’t help but feel fans and odds-makers have completely dismissed him in his fight against Danny Garcia.

That disrespect has inspired Redkach, much the way it did before the Ukrainian veteran defeated Devon Alexander seven months ago. Redkach was viewed as a tune-up opponent for Alexander, but the left-handed underdog upset Alexander by sixth-round knockout June 1 at Soboba Casino Resort in San Jacinto, California.

Handicappers have installed Philadelphia’s Garcia (35-2, 21 KOs) as a 25-1 favorite to beat Redkach (23-4-1, 18 KOs) in a 12-round main event Showtime will televise Saturday night from Barclays Center in Brooklyn. 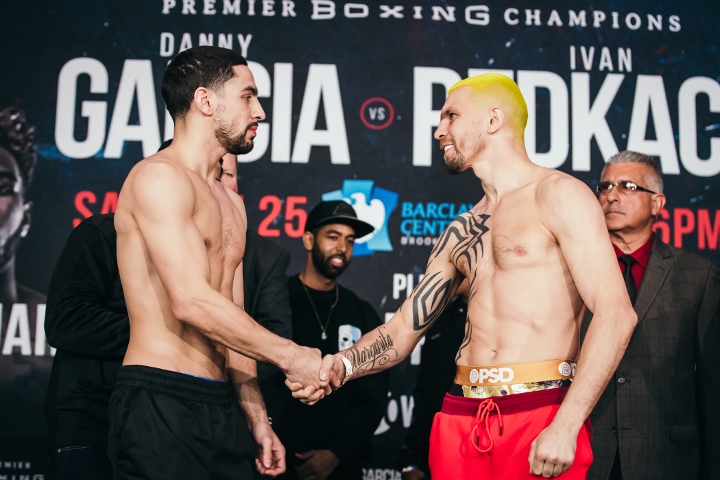 Redkach dropped Alexander three times before referee Thomas Taylor stopped their scheduled 10-rounder 1:10 into the sixth round. Alexander was ahead by the same score, 48-47, on all three cards before Redkach caught him with a left uppercut and an overhand left to the side of his head that floored Alexander the first time.

His surprising stoppage of Alexander came in Redkach’s debut at the welterweight limit of 147 pounds.

Garcia, meanwhile, continues to discuss potential pay-per-view showdowns with Errol Spence Jr. and Manny Pacquiao. Redkach, a onetime lightweight who stands 2½ inches taller than Garcia, still thinks that the former welterweight and junior welterweight champion is one of the few people that actually considers him a dangerous opponent.

“There are a of lot easier opponents Danny could’ve picked if he just wanted to have an easy fight, or a tune-up fight,” Redkach said. “I believe Danny does know who he’s in with. But if he is underestimating me, then it’s gonna be a huge shock to him on Saturday.”

The 31-year-old Garcia will fight for the first time since he knocked out Adrian Granados (20-8-2, 14 KOs, 1 NC) in the seventh round of their April 20 fight at Dignity Health Sports Park in Carson, California.

[QUOTE=HeadBodyBodyBody;20348687]Garcia said that Redkach said 'Mike Tyson!' as he did it lol[/QUOTE] lol and then thanked him at the end of the fight lmfao

Redkach could have did it if he started throwing to the body in combination after the 9th round. He kept throwing one at a time though. Garcia was hurting for sure. Hopefully this is the last we see of him.…

[QUOTE=PAC-BOY;20348657]So he knew he was gonna bite Danny the whole time...... thats all i was surprised from[/QUOTE] Garcia said that Redkach said 'Mike Tyson!' as he did it lol

The bite indeed surprised me