Ray Mancini: I'm So Happy That I Came Up At The Time I Did

By this date forty years ago, 19-year-old Ray Mancini had already fought three times. But he was just getting started, because when 1980 ended, he had gone from 4-0 as a pro to 16-0, fighting 12 times in the calendar year.

Yeah, things have changed since then.

“I'm so happy that I came up at the time I did,” said very proud of that. You used to talk about the 50s, but the early 80s was the best boxing decade since I can remember. Boxing always went with the heavyweights. In the 20s, it was (Jack) Dempsey, the 30s and 40s was Joe Louis, the 50s it was Rocky Marciano and the 60s and 70s was (Muhammad) Ali. And don't get me wrong, Larry Holmes was one of the top five heavyweights of all-time, no dispute, but in the 80s he was not the most popular fighter. We had Ray (Leonard), Tommy (Hearns), Marvin (Hagler), (Roberto) Duran, (Alexis) Arguello, (Aaron) Pryor, (Hector) Camacho, all those guys. All those lighter weight fighters were the most popular fighters.”

There was a pretty decent lightweight named “Boom Boom” as well, an all-action fighter with power, an aggressive style and a willingness to take one to give two back. He also had a story that was made for the networks that were embracing boxing at the time, with CBS latching on to Mancini, who was fighting to win a title for his father Lenny, whose championship aspirations were taken away by World War II.

“It was a major part,” said Mancini asked what role the story of father and son played in his early success. “(Manager) Dave Wolf knew how to sell the story of me and my father. But here's the difference - it was a real story. The old saying in marketing is that you sell the sizzle, not the steak. But you've gotta have a good piece of steak, because you only get one shot. And when people say, ‘Television made you,’ there's no dispute about that, but here's the rub - if I'm a losing fighter, then what does it mean? I could fight a little bit, too.”

More than a little bit, but before there was the epic first title fight with Alexis Arguello, his title-winning effort over Arturo Frias in perhaps the best one-round title fight ever, the tragic win over Deuk Koo Kim and the other victories that landed him in the International Boxing Hall of Fame in 2015, there was 1980.

When the year began, Mancini was four fights into a pro career that started after a 50-bout amateur career, and it was clear from the start that he was meant for the punch for pay ranks.

“The reason I turned pro was because I had a pro style in the amateurs,” he said. “So why would I fight a four-round fight? A four-round fight and a three-round fight are no different. I went right to sixes, and in my second fight I went all six rounds and I dropped the guy three times. He kept getting up, and you go, 'Oh, this is the pro game.'” 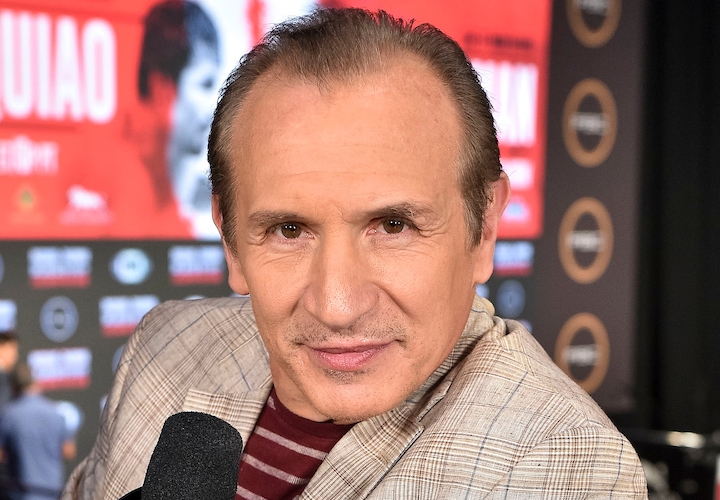 Mancini laughs, learning quickly that the stakes were higher at this level and that you couldn’t judge an opponent by his record.

“These guys ain't laying down, they gotta eat,” he said. “One thing I learned, a guy once said the difference between the pro game and the amateurs, you're in the hurtin' game now. You gotta be able to hurt somebody. If not, you're gonna get hurt. You could fight guys, they ain't the most talented fighters, but they'll bite your nose off for a buck and a quarter. They'll fight you all day and all night to get that extra money.”

It wasn’t even safe in the gym, where Mancini learned his craft – and a little more – from his trainer Murphy Griffith, his father, and some sparring partners who weren’t there to take it easy on the rising star.

“We all know about the Fritzie Zivics of the world,” said Mancini. “Sandy Saddler was a great fighter, but he'd pull all the tricks. My father taught me the tricks of the trade. Even Griff, my trainer early on, showed me the tricks. He said, 'Ray, you're gonna be fighting on the inside, I'm gonna show you some tricks. This will be the difference between being a contender and a champ.'”

From early on, “Boom Boom” knew how to handle himself in the trenches, and if it got testy, he wouldn’t back down.

“I never was a guy to hit low, but in the gym, guys hit low and Griff would say, 'Hey man, you gotta earn your respect. This guy bangs you low, you bring it right back. Make his cup a necktie.' So these guys hit you low, bang, left hook right to the cup. ‘Hey, we can do it right or we can do this all day long.’ Guys like that chop guys down. They bang a guy low, these guys go, ‘Oh, I'm sorry,’ and they bow. They come back and boom, they do it again and they bow. The other guy's cut in half now because he can't catch his breath, his balls are in his throat, and they apologize because they know they can't do it three times. They get two warnings before they take a point away. In the meantime, you're half dead.”

“It's a wonderful game.”

It is, especially when you hear the stories coming from the mouth of Mancini, whose enthusiasm for the sport is still there decades later. And it was certainly there when he began a schedule that would make most fighters cringe.

“Talking about 1980, in 12 days I fought three times,” he said. “I was on the way up, my manager had one fight here, I knocked the guy (Dale Gordon) out in the first round, fought the next week, knocked the guy (Charlie Evans) out in the second round. When you're on the way up, people don't need undercard fighters, so your manager pays to get you on the card. ‘Yeah, we'll use an extra fight,’ then four days later, I went to Mississippi and won in the third round (over Ramiro Hernandez).”

Three fights in 12 days. Back in the old days, that wasn’t a stretch for the Harry Grebs of the world, but in 1980, it was still a busier than usual slate. Mancini didn’t blink, and though he walked through his opposition, he did admit it was a struggle mentally.

“Physically, it wasn't as demanding as you think, but the mental part is what people miss,” he explains. “Whether you were getting ready for a six-round fight, a ten-round fight or a 15-round title fight, the mindset's gotta be the same. So when you have a come down after a fight, it's hard to get back up. Except now you have to do it in a couple days.”

He did it, though, and as the year progressed, the level of opposition followed suit. There were unbeatens Antonio Rutledge (TKO1) and Trevor Evelyn (KO2), 15-1 Bobby Sparks (KO1) and 37-fight vet Jaime Nava (W10). But the biggest win of the year for Mancini was the one he scored over Johnny Summerhays, a former Canadian champion who had been in the ring with the likes of Aaron Pryor, Greg Coverson, Gaetan Hart and Al Ford. Mancini shut him out over 10 rounds in September, added three more victories, and then it was off to a life-changing year in 1981.

“We were 16-0 going into the following year and we felt that now it was time to make a move,” he said. “I love when people say, 'Oh, it's too soon.' When is the right time? When you're a fighter on the way up, you'll take on the world.”

Mancini was about to.

He beat the life outta a Korean... I was yelling at my old school tv for the ref to stop the fight. Koreans get smashed regularly

Ray Mancini violent killer instinct in the ring was a exciting thing to watch. I love that saying of hitting low when they hit him. :boxing:

One of my nicknames as a kid was boom boom. But mancini was no idol of mine. To me, he was an in shape punching bag and i was mad he wouldn't fight pryor. I never forgave him for that.…