Ray Beltran: I've Got The Power To Hurt Lomachenko!

While he has a first World Title defence to deal with soon, Ray Beltran says a unification with Vasyl Lomachenko is "very possible".

Beltran defends his WBO Lightweight crown against Jose Pedraza on August 25th, live on BoxNation, six months after winning the belt in a thrilling points win over Paulus Moses.

Meanwhile, Lomachenko has established himself as one of the best boxers on the globe, and he made history in May when becoming the fastest ever three-weight World Champion. 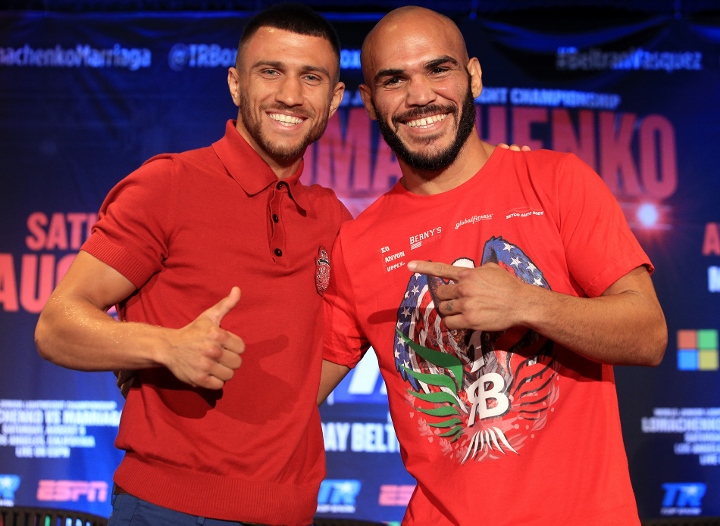 The Ukrainian dethroned Jorge Linares to win the WBA and Ring Magazine belts on BoxNation screens, and looked set for an instant unification with his stablemate. However 'Loma' had to undergo surgery for a torn labrum in his right shoulder, delaying his return until after the summer.

"Right now we have a fight on August 25th, and we're focused on that fight. We think about what's next after," Beltran told FightHype this week.

"I've got my own conclusions about Lomachenko's style. I think I have the advantage of the size and strength.

"I think about how I fought with [Terence] Crawford [2014 UD loss]. Crawford's another great fighter, a very smart fighter. I got beat, but I don't think I did that bad. That gave me some confidence," he added.

Lomachenko was knocked down for the first time as a professional against Linares when the Venezuelan landed a strong straight right in the sixth round, and Beltran believes Lomachenko's style leaves him open.

"Another thing is that Lomachenko stays in the pocket," explained the 37-year-old. "He comes and stays close, he gets hit. I believe I've got enough power to hurt him. All it takes is one punch.

"There's nothing impossible in life. I am where I am because I believe in myself, not because people believe in me. All it takes is me to have the heart."

Beltran shouldn't even be champ. He lost to Moses by at least 2 rounds! Beltran, if he beats Tanks leftovers, will get beaten pillar to post in a non-competitive fight against Loma

I believe this is a tough fight for Lomachenko, if Beltran gets past Pedraza. Beltran is slow, but hes a big lightweight. Lomachenko will have to box, and not stay in the pocket. That's true with any lightweight with power…

very funny beltran! u couldnt even hurt that african cat !

nomaschenko coming off what could be a career ending injury

[QUOTE=Fake versace;18980754]Beltran may be getting on but he hits harder than Salido. I really believe Beltran by early stoppage[/QUOTE] Beltran isn't as fast as Tank, so he's not going to catch Pedraza with that Sunday punch. I think it will…