It’s probably not his fault, but I’m still going to blame Edward Brophy.

The executive director of the International Boxing Hall of Fame had zero impact on when my parents met, married and decided to have children, so my blessed arrival on day No. 45 of Richard Nixon’s presidency was likely not determined by anything over which he or his minions had control.

But make no mistake, as I look at the envelope that originated from his 13032 postal code, it’s him who’s making me feel each one of my 48 years, seven months and five days.

As it has each year since I became a full member of the Boxing Writers Association of America, Mr. Brophy’s enveloped correspondence again contained the hall of fame voting ballot that gives me a small sliver of influence on the fighters that will and will not be included for induction the following year.

And if you haven’t been a part of an induction weekend in Canastota, do yourself a favor.

Anyway, continuing a recent swerve from past ballot procedures, the timeframe constituting old-timers up for consideration has been greatly expanded, and this year again includes those whose final bout was as recent as 1989.

For all those walking with me through the early steps of middle age, I’ll let that sink in a bit.

We were in college. We had jobs. We had cars. We had girlfriends. In fact, come to think of it, we had all the preliminary trappings of eventual adulthood, minus the mortgage and the kid and the 401K. 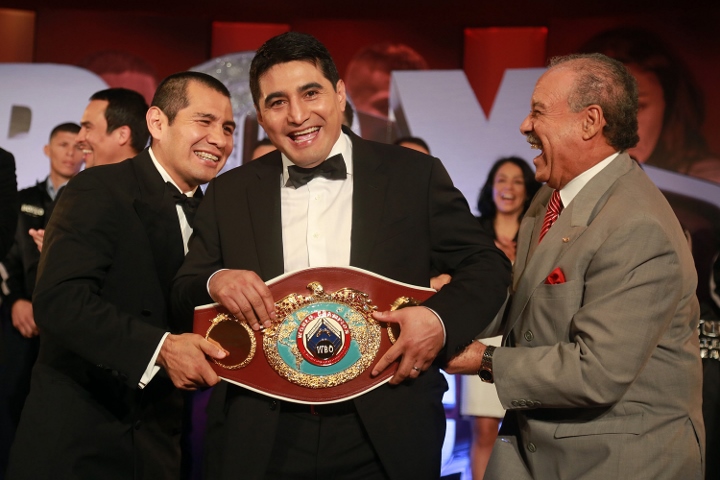 I can’t speak for the similarly creaky masses, but when I hear the phrase “old-timer,” I still conjure black-and-white movie visions of Joe Louis pounding the fight out of Max Schmeling in their 1938 rematch.

Or, at the very least, the image of my grandfather-in-law, Granville Cowden, standing alongside Jack Dempsey in the framed restaurant photo that hangs about five feet from where I sit as I write this.

When I was a young fight fan, the matches that occurred 28 years prior seemed so old that they might as well have been witnessed by dinosaurs. Last year, a guy whose amateur swan song and professional debut I watched as a teenager – Evander Holyfield – was voted in to the hall.

But lest I spend too much time in a nostalgic self-pitying funk, there’s work to be done. Alongside relics of my youth whose last fights came no later than the first year of the first Bush Era, there are no fewer than 32 names up for consideration as “modern” inductees – meaning their last fights came somewhere in the 21-year stretch between Jan. 1, 1989 and Dec. 31, 2012.

In keeping with a tradition in this space that’s yielded hate mail for suggesting no one named Gatti belongs in the hall without paid admission here’s a wide-open look at my ballot for those “fresh” faces.

My voting criteria, while admittedly not as scientifically eloquent as some colleagues, is simple.

Was the fighter among the best in his peer group for a prolonged stretch of time? Not a one-year star or a popular guy who got TV time solely due to persona or style, but was he one of those guys – for at least a handful of years – who simply had to be on a short list of the best fighters in the world?

If the answer is yes – think Mayweather and Pacquiao – he’s got my vote.

If the answer is no – think Butterbean and Kardashian – he’s got my apologies.

And with that, gentlemen, start your vitriol.

[QUOTE=yankees7448;18127826]Correcting unsubstantiated bias is not a small matter. To those who harp on such things. No one put an asterisk next to Sugar Ray Leonard's victory over Marvin Hagler. I am not going to do the same. And for the…

[QUOTE=Dr.Cool;18127032]Michalczewski doesn't deserve to be in. Though DM was a huge miss for RJJ. RJJ in his prime had DM who was vying for best in the same weight class and Hopkins vying for best p4p. This was the scene…

[QUOTE=OnePunch;18126118]Hatton had a good career, but beating old Zoo and old Castillo and losing to Collazo shouldnt get you in the HOF Lockridge should get in just for the street KO in front of the laundromat......lol[/QUOTE] He lost to collazo?…