Provodnikov's Promoter Not Surprised His Fighter Went To SHO

On June 11th from the Turning Stone Casino and Resort in Verona, New York, former WBO junior welterweight world champion Ruslan Provodnikov takes on John Molina in what will be his debut on Showtime, after making numerous appearances on rival HBO the past several years.

The deal was engineered by Artie Pelullo, the head of Banner Promotions, who says he's not surprised that his client is now at Showtime.

"No, not at all, I've been trying to bring Ruslan to Showtime for over 15, 16  months. [Showtime Sports head] Stephen Espinoza wanted him," said Pelullo on Tuesday afternoon at the Fortune Gym where an open workout was held for this event. 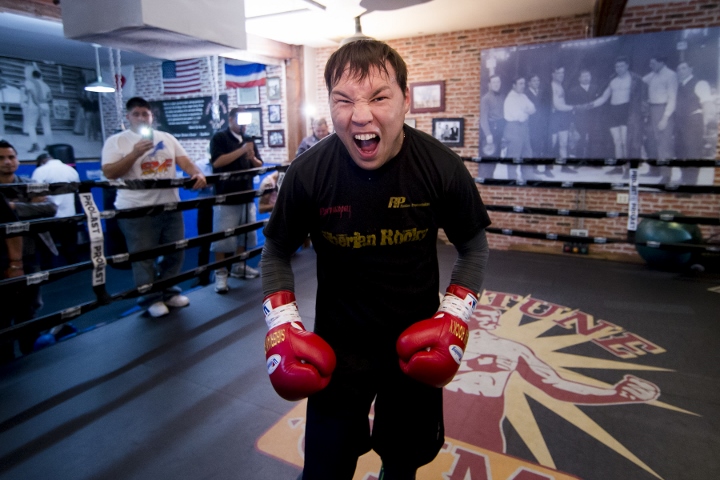 When asked if he was disappointed or surprised that HBO didn't show more interest in 'the Siberian Rocky', Pelullo answered:

"Listen, I don't understand why HBO didn't find more fights for Ruslan Provodnikov. His lowest rating was 1.089 million viewers, he was always consistently in the top two or three. So they had nothing for us, they offered us nothing and it was the right move to make and I've been working with Stephen to bring him to Showtime two years go."

Pelullo continued,"When Showtime bid on the (Lucas) Matthysse fight two Christmas' ago they bid $2 million and HBO matched it for that fight. So he was interested two years ago even though we weren't on Showtime for that fight. We were on HBO - because they  had a right to match it - (Ruslan) became a free agent because of the first-and-last was no longer involved and then we were able to make a deal and walk across the street."

Provo means war which means excitement which means ratings. Hope the poor bastard gets paid for the last few fights of his career. Such an honest good dude.

Glad to see he's back fighting on TV. Although I'm really not a big fan of brawlers, I must admit they can be entertaining to watch. Be that as it may, I'm against fighters signing exclusive deals to a particular…

That's the beauty of the free market. Good for Ruslan. He's a true fighter who deserves everything he can get.

Poor ruslan. I hope he gets paid well for the beatings hes gonna get and then retires. I got a weird feeling his fight might do lower ratings than the lara-vanes fight which would be unfortunate for him.

HBO paid double for Matthysse vs. Provodnikov than what they offered for Walters vs. Lomanchenko Crawford's next fight is on PPV and his first option was Ruslan but he left for Showtime and HBO didn't offer him a deal. Zurdo…